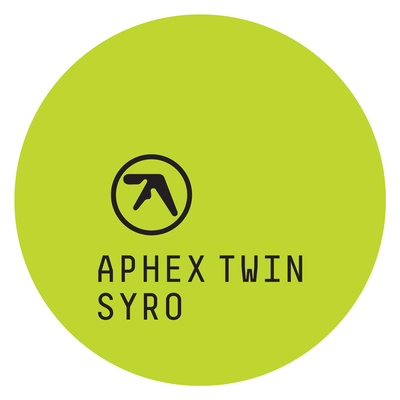 The minimalist front cover to ‘Syro’

Aphex Twin is back. More accessible, more placid, there’s just enough dissonance to keep you on your toes.

But first, a whinge or two.

“Can you hurry up with that review Brodie? It’s been over 3 weeks!…”

“Who do you think I am? The world’s busiest music nerd?”

With no internet in-house (grumble grumble)… I’ve been listening in tasty snippets in the library! Not quite the intended listening place…

Aphex Twin – one of the many (and best loved) names of Richard D. James. Syro is the first in a long time. He’s a pioneer in the electronic music scene, so if you’re new, there’re a few things to listen out for:

– There’re the ambient ones – the soft waves of synths, catchy melodies and pop-hooks perfect for late night walks. Take Flim for example:

– There’re the ones with influences… he uses samples/songs/ideas from everyone, from Dillinger Escape Plan to James Brown to Incredible Bongo Band to Led Zeppelin…

– There’re the ones you’ll recognise from all over. Think artists like Kanye West, Lonely Island, or films such as Four Lions, Blade, Children of Men, even GTA IV…

The release of Syro was a big deal. More like a frenzy. A blimp was flown across New York City, and the electronic music world exploded when his moniker was spray painted… It was released on Tor (the deeeeep web….), but it’s available to muggles like me now.

“What was this about a review?”

Well, where do you begin? All the song names are weird and hard to repeat, a tribute to the synths he used to write them. The songs run in and out of each other, sometimes bleeting, sometimes thrashing.

Nor do I think you’re really meant to recite the names of them. There’s a vibe to it. Whether you’re dancing the night (and maybe your dignity) away in a warehouse, or sat brooding in your bedroom, I think it’s meant to be dark.

“But you’re in a library you said! The cheek of it…”

There are songs that sound like the backdrop to a Fifa Street soundtrack (GOAL!….), weird vocal lines that moan in and out, spluttery analogue-bubblebath wet-farts, weird dancy drums, weirdly dissonant (yet alluring) chord changes, out of tune pianos, weird pitch bends that sound like a bonus level on Sonic the Hedgehog…

“You’re using the word weird a lot, are you ok?”

I checked my thesaurus and I’m fresh out of adjectives…. It’s such a distinctive sound, with the drums that try to lose you and the melodies that try and shake you off. Despite the length of some of the tracks it somehow doesn’t get too boring. You’re sucked in to it.

At times it also feels more stripped back. Slowed synth progressions, almost hip-hop drums. There’s nothing wrong with keeping it simple, but it does come across as a bit more… meh. You wait and wait for it to build, but it just sort of fades away.

“You can’t criticise Aphex Twin though?! He’s like a genius…”

That’s slightly the problem. Aphex Twin has such an established reputation behind him it feels wrong to say the album is just… good. But that’s not necessarily a bad thing. That’s the appeal of Aphex Twin, after all this time he’s not afraid to run his own path. There’s no pop chorus, because there isn’t so much filler.

It’s definitely less floaty than a lot of his other releases, and it’s here you can see how finely crafted a beat can be. He’s not afraid to mix up the go-to glittery drum flourishes with something a little bit funkier, a little bit crunchier. It has moments that sound something like 65daysofstatic, or a Three Trapped Tigers ditty… synths let loose on some kind of melodic odyssey with hard hitting snares…

You can also see it as a bit more childlike and fun. The name Syro kind of reflects this – apparently it’s a made up word his daughter came up with. There’s not many whole albums people listen to nowadays, especially not in electronic music, but this is a pretty good one to start with I suppose.

Ooh, and, stick around at the end for a hauntingly beautiful piano track. It’s not quite Avril 14th, but that’s a masterpiece. Nothing like the trace of piano to let an album start to sink in…

“Wow, that wasn’t a review at all! Scatter-gunning all over the place…”

“Well, I just like to write about what I was feeling…”

“You’ve stolen my time! I could have done something useful, like…”

“… listen to the album maybe?”