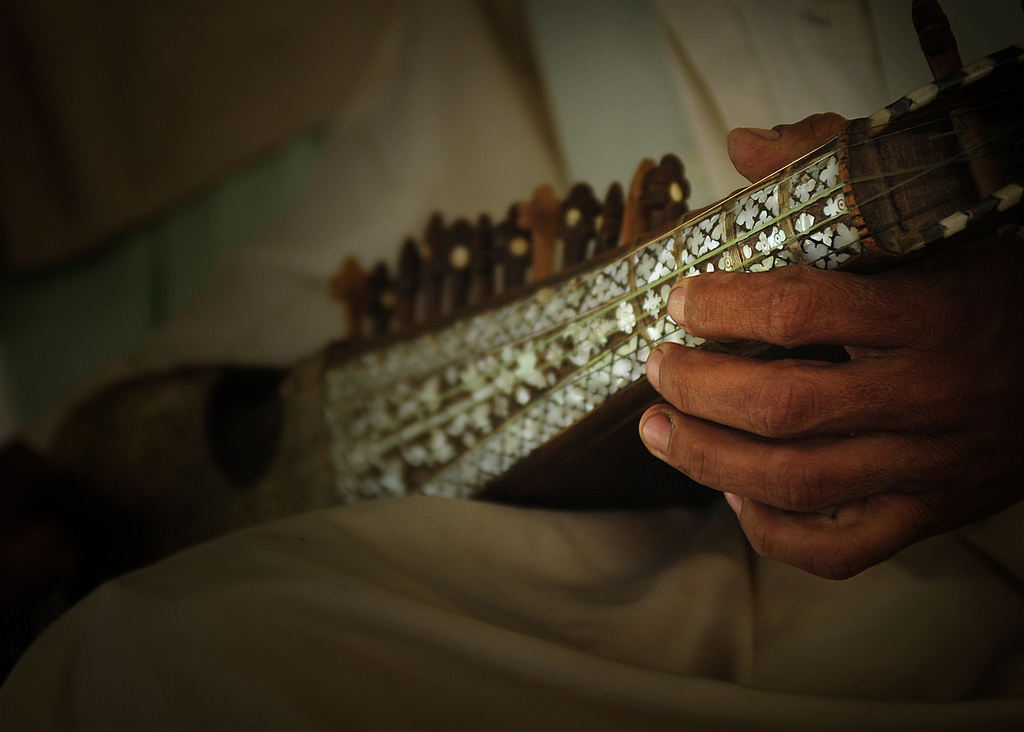 How do the young know what they’re missing?

Music will never be the top priority in a warzone. Medical aid and steps towards reconciliation will always be more important. But given the power it has to bring people together, perhaps the music of the communities living and working in regions affected by war should be more carefully considered.

It is clear that there are people who believe that the suppression of music in Afghanistan is unlike any other suppression of music in history. The music of Afghanistan before the war was hugely varied and a major part of everyday life. Due to the fact that Afghanistan has many neighbouring countries, there were many different regional music styles within Afghanistan that reflected the style of the music of the nearest neighbouring country. Music was important at weddings, dances and festivals. It could, at one time, be played wherever it was wanted. This is no longer the case. For many Afghans today, the days when music was a part of daily life are a distant memory, and in many cases only part of the stories their parents tell. For more than 20 years now, Afghanistan has been in a state of armed conflict, and throughout that time music has been banned to various degrees.

Through most of its history, Afghanistan has been subject to autocratic rule that has brought with it restrictions on the freedom of expression. Then, in 1964, a new constitution was formed; an attempt at parliamentary democracy. At this time a new press law was passed and newspapers and magazines were in circulation. Theatres were opened and Afghanistan’s one radio station could be played freely. A time of relative peace and freedom, the calm before the storm that brought war.

After the Communist takeover and Soviet invasion of the late seventies, and the years of conflict that followed, Afghanistan’s government took a tighter control of the media and public music performances were banned. In 1992 the last Communist government fell and there were further years of internal struggle for Kabul, a city that is essentially a gateway to Pakistan and China. In this time of political unrest and vulnerability of the country, the Taliban gradually assumed control of most of the major cities. This was part of what led to the continuing state of conflict we associate with Afghanistan today.

Music in the Afghan sense of the word is, according to some reports, now totally outlawed in Afghanistan. It is not only politically motivated music that has been taken from the Afghans, but all types of music. It has been reported that in the years before the Taliban rose to power, music was heavily censored and public performances were banned but private music was allowed. Now this has all changed. The ban of music is, in places, so forceful that if instruments are found they are sometimes burnt in public. Under the rule of the Taliban religious “music” – sung recitations of the Holy Koran and Taliban chants – were still allowed, some reports say. However these are usually not considered music in Afghanistan as they are unaccompanied and are motivated by religion, not aesthetic enjoyment. But at the same time too, there have been musicians fighting to keep the music culture of Afghanistan alive.

Before 2001 when the Taliban were ousted from power by the coalition, musicians were prosecuted and exiled. They were subjected to humiliation and told they were sinners. Many migrated to Afghanistan’s neighbouring countries and began work to ensure that when the day came that music was again welcome in Afghanistan, there would be Afghan musicians ready to return with their own music. One example is Peshawar, a city in Pakistan where exiled Afghan musicians have set up music academies such as The Irfan Music Centre in which young Afghan music enthusiasts are trained on traditional instruments like the rubab and the zerbaghali. There are also now many Afghan musicians spread around the world still making their own music and spreading the word about the situation for musicians in Afghanistan. One of these is DJ Besho, who moved from Afghanistan to Germany and is now well known in both countries, rapping for peace and an end to the conflict.

There is also an organisation named Freemuse, an independent and international association that advocates freedom of expression of musicians and composers worldwide. This organisation works to raise awareness of how situations around the world are affecting artists, aiming to build a worldwide network of musicians under threat. Active since 1998, Freemuse is a sign of hope and change to the censorship of music. Today as globalisation hits all areas of life for good and for bad, this is an example of how it can be used to help those being suppressed in their own countries like those still in some parts of Afghanistan now.

Whilst there are organisations like Freemuse giving support to musicians, the conflict in Afghanistan continues. A time when music in Afghanistan can be as free as the music in our own society is still far away and already there is a whole generation of Afghans who have grown up without music. How are they to know what they are missing? Freemuse does an important job supporting threatened musicians but it cannot keep the musical culture of Afghanistan alive by itself. We must hope that the exiled musicians of Afghanistan who remember the old days of musical freedom and variety can inspire the next generation and bring sound back to the streets. Music may not be a way of ending the conflict, but it can definitely heal, bond and unite the society in a way that no medicine can do.

And John Baily’s article “Can you stop the birds singing? The censorship of music in Afghanistan.”