Briony Conway in Literature on 4 December, 2013. 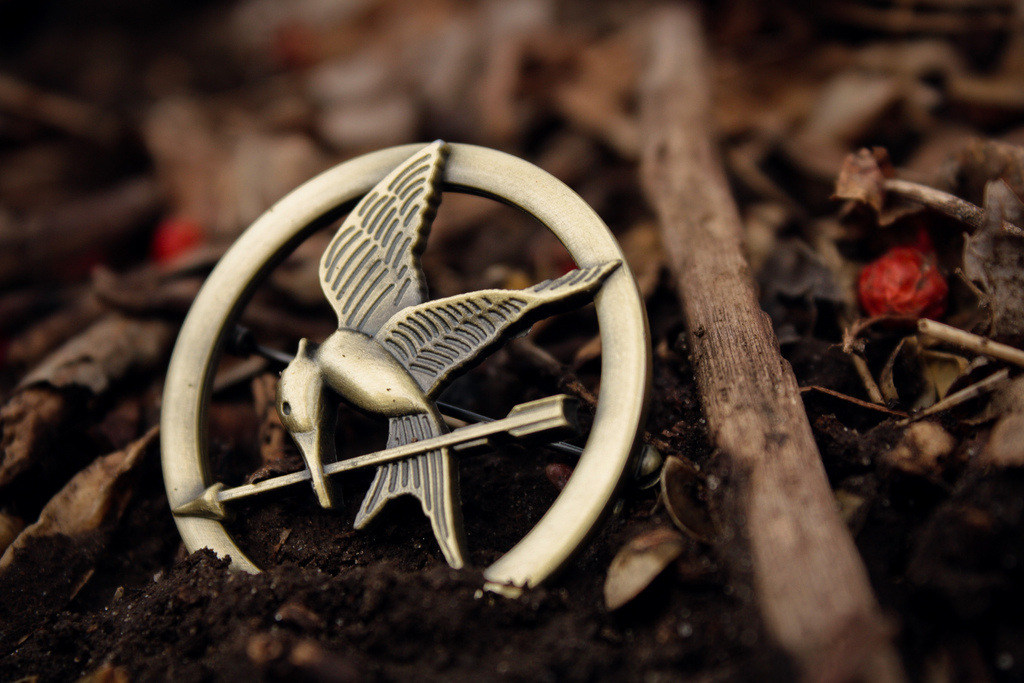 “The young adult dystopian revolution is really catching fire”, and Suzanne Collins is far from being the only example of the genre’s success. 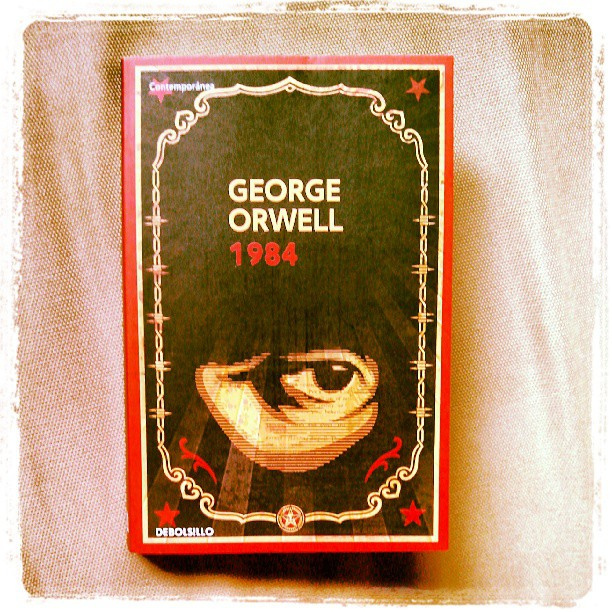 A classic work of dystopian literature, the front covers of which frequently depict the central theme of being watched.

1billion. Cinna wasn’t wrong to bet on the girl on fire. Yet Suzanne Collins’ biggest achievement perhaps lies not in the numbers, but in creating a work of YA literature that has both garnered a following which crosses gender and age brackets, and that paints an incisive, and disarmingly relevant, portrait of a highly dystopian society.

It may be bandied about as the current flavour du jour within YA literature, but what does it mean to call a novel dystopian? Simply put, a dystopia is a society, or world, that is fundamentally undesirable. This can often be because of fear of, and the lack of freedom imposed by, an over-controlling government, or authoritarian body. A dystopia is not a post-apocalyptic world, in the aftermath of some form of general disaster, because a dystopia implies the existence of an organised society. Nor is it merely a sci-fi civilization, because it tends to instead represent a skewed version of a society that is recognisably rooted in our own, and which addresses the potential ramifications of leaving unchecked some very real and current issues. Most famously this has taken the form of commenting on the betrayal of the revolution in the totalitarian government of Orwell’s Nineteen Eighty-Four, or on censorship in the book burning of Bradbury’s Fahrenheit 451, but the importance of the modern problems prevalent in recent YA dystopias should not be underestimated, and Panem’s murderous reality TV show The Hunger Games is but the tip of the iceberg.

Dystopian fiction is currently the most popular it’s been in fifty years, and most are crediting young adult dystopias for this resurgence of interest in the genre. If this is the case then perhaps the questions that spring to mind should be about which issues commonly define this brand of young adult dystopia, and why reading about a dystopian society appeals to a young adult audience? Of course, it could just be that they’re good stories. They’re fast-paced, exciting, and imaginative. The teenage protagonist goes up against a system that is fundamentally corrupted or flawed, and often does so with little support and little hope. Seneca Crane had a point when he stated that everybody loves an underdog. 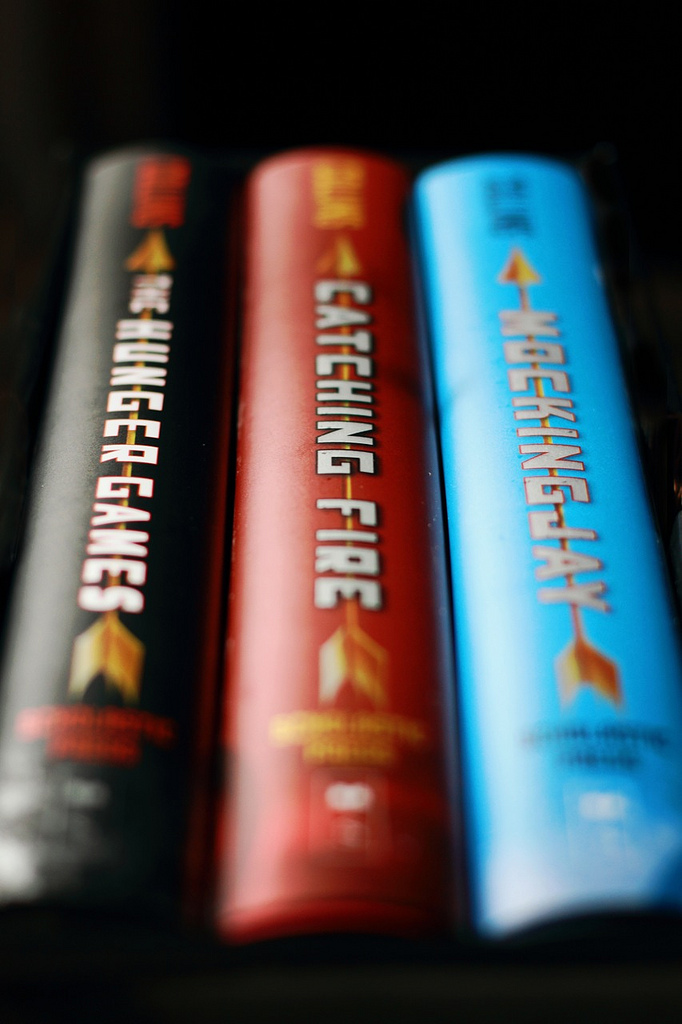 However, there is also something to be said for the prominence of the theme of identity within the current crop of YA dystopias. As the political systems within the various novels attempt to impose their own set of ideals onto the individual it’s hard to miss the commentary on our underlying culture of superficially judging or pigeon-holing people. In Scott Westerfeld’s Uglies, everyone has extreme plastic surgery upon turning 16 to make them “pretty”. The society in Lauren Oliver’s Delirium pitches love as a disease, and “cures” everyone with surgery upon their eighteenth birthday, whilst the government decides on who your future partner will be in Ally Condie’s Matched. In our current society personality tests tell us which job would suit us, whilst reality TV gives people makeovers and dating matches, and thus these dystopias are not so farfetched as to appear impossible. Perhaps for teenagers the attractiveness of this dystopian literature can be found in protagonists who do not conform to this, but instead fight for freedom in their looks, their future jobs, their marriages, and the formation of their identities. These dystopian governments are founded on the construct of the Other, in which you are defined by being the opposite of that which you are not, be it – in these novels – pretty or ugly, the cured or the invalids, and the matched or the singles. The rejection of these tropes by the protagonists, and their refusal to submit to the injustices of the governments is surely appealing to adolescents engaged in the pivotal process of determining their own identity. Never is this clearer than in the series constantly touted as the successor to The Hunger Games – Veronica Roth’s Divergent trilogy.

There’s a reason why over 15 million results come up on Google when you search for “Divergent is the next Hunger Games.” Both are trilogies centred on a tough teenage girl who is forced to fight firstly for her survival, and later for revolution, in a dystopian society that has been divided into strict districts. This one’s getting the Hollywood treatment too, with the film version due out in March 2014, and when Allegiant, the third book in the trilogy, was released in October, pre-orders outsold Collins’ Mockingjay five to one. Divergent is definitely becoming a force to be reckoned with, and Roth is perhaps the author who highlights the theme of identity the most sharply. Five factions exist in her dystopian Chicago, and each one represents the main personality trait of its members, be they intelligent, honest, brave, selfless or peaceful. Sixteen year old Tris was born into abnegation, or selflessness, but upon taking an aptitude test it’s revealed that she is divergent, or shows aptitude for more than one faction. Upon choosing to transfer factions and leave behind her family, Tris immediately begins to battle for her life in a brutal initiation process, and to uncover the sinister foundations beneath their artificially perfect society.

The structure of her world seems at first not unreasonable, and to many within the fictional society it verges on utopian, but Tris’ fight against the ultimately dangerous government embodies the strengths of the YA dystopia. Divergent bursts at the seams with action, whilst it simultaneously manages to depict a compelling portrait of a dystopia. In the search for a societal structure that upholds the key values of humanity, the citizens of Roth’s Chicago have lost the richness and breadth of character that her character Tobias articulates as key to every human being. He bemoans the strict identity imposed on them by the government, and cites a desire to be “brave, and selfless, and smart, and kind, and honest.” This insistence on choosing his own identity, instead of accepting society’s ideas for him, is fundamental to understanding Divergent, and to the other current YA dystopias.

Fortunately, the novels themselves don’t ask you to settle for just one literary “faction”, because along with the relevant, thought provoking questions raised by the nature of the dystopian societies, they also provide excitement, romance, and strong, engaging protagonists in spades. If you’ll please pardon the pun, the young adult dystopian revolution really is catching fire.