Katie Rosseinsky in Literature on 15 February, 2012. 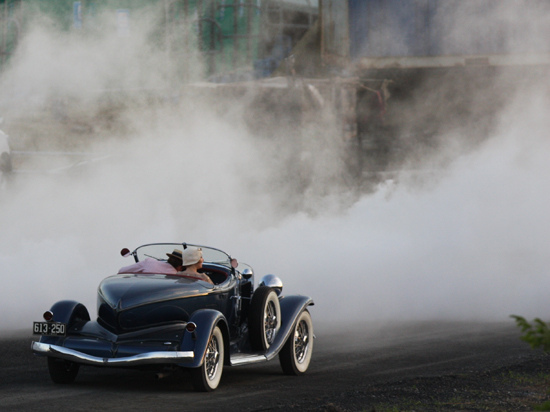 Is all that remains of the flame of love the smoke from an exhaust pipe? Photograph courtesy of Eva Rinaldi Celebrity and Live Music Photographer

Genuine romantic gestures, a vaguely insulting box of chocolates clearly panic-purchased from a Shell garage, garish cards emblazoned with questionable sentiments, or just another chance to sit weeping into a tub of Ben and Jerry’s whilst bemoaning your inevitable metamorphosis into Bridget Jones: from the cynical to the cheesy, everyone has their own idea of what Valentine’s Day means. In contrast, our ideas about what constitutes a classic love story sometimes appear frustratingly predictable, as top ten lists are dominated by Jane Austen and the Brontë sisters. Personally, I believe that two of the best love stories in literature require a departure from the well-trodden ground of BBC costume-dramas, and instead encourage readers to cross the Atlantic. Fitzgerald’s The Great Gatsby – not merely a classic romance but also frequently touted as a contender for the mythical “Great American Novel” – and Edith Wharton’s undeservedly less-read The Age of Innocence deny us the happy ending that we crave. However, this lack of closure makes them all the more heart-breaking and haunting, and thus perhaps the perfect antidote to this month’s sickly sweet Hallmark-fest.

F. Scott Fitzgerald’s 1925 novel seems to be a ubiquitous cultural reference point right now, with flapper dresses on the spring-summer catwalk and a Baz Luhrmann film adaptation, starring Leonardo DiCaprio and Carey Mulligan, in the pipeline for next winter. This can make us forget that the novel is, first and foremost, a horribly affecting story of ill-fated love. Narrator Nick Carraway moves to the glamorous West Egg area of New York, where his neighbour is the elusive Jay Gatsby, who has built himself “an illusion to live by”: a glamorous world of seemingly non-stop partying, champagne, and fast cars. All this, however, is merely an attempt to win back the lovely Daisy, now married to the boorish Tom Buchanan, who is essentially a ‘lad’ transported back to the Jazz Age. Gatsby’s love consumes him and determines his every act: yet what is most striking – and most heart-breaking – is Fitzgerald’s absolute refusal to romanticize his characters, who remain painfully fallible and human: both Jay and Daisy are materialistic and careless. Daisy in particular has the emotional range and subtlety of an ITV2 documentary presented by Peter Andre. Despite this, Gatsby’s pursuit of Daisy is the only genuine thing about him and this is more than redeeming. His chase for the unattainable becomes emblematic of a wider goal, the equally elusive American Dream. For those who haven’t read it, I won’t specify the details. But, like perhaps all the best love stories, the ending is less than happy and I defy anyone to read Fitzgerald’s final sentences without welling-up.

Edith Wharton’s 1920 novel The Age of Innocence is another story of thwarted love within a flawed society. The reader is transported back to the New York of the 1870s, a period known as the Gilded Age, reflecting its superficiality and hypocrisy. For those of you who like a lowbrow pop culture analogy, the world of Wharton’s novel is not unlike a nineteenth century Gossip Girl in terms of its cat-fighting and back-stabbing. Newland Archer (yes, he does sound unfortunately like a brand of ale) is happily engaged to the perfect, if slightly naïve and dull, May Welland. His world, and the New York society as a whole, is shaken by the arrival of May’s cousin, the beautiful Countess Ellen Olenska, who is scandalously fleeing an unhappy marriage. Inevitably, the two fall in love, yet the crushingly claustrophobic social codes of high society are destined to keep them apart, denying the opportunity to act upon real emotion by forcing adherence to outdated double standards. Like Fitzgerald, Wharton denies us the solace of a happy ending, and the final pages depicting Newland some years later, ruminating on what could have been, are again pretty emotive stuff. As with Gatsby it is the fallibility of the characters in The Age of Innocence that give the novel an enduring resonance: Newland and Ellen are shown to be hemmed in by their social environment and the expectations of others, and are thus perhaps far more empathetic and believable than a pair such as Cathy and Heathcliff.

You can’t condense the feelings of either pair of fictional lovers into a cheesy rhyming couplet on a heart festooned card. Both of these love stories demonstrate the very real and enduring knowledge of what it is to be human, make mistakes, and feel as though things are spiralling out of control. Perhaps it is this juxtaposition of the deep, uncontrollable love of the protagonists and their inability – due to their personal failings and to the limitations of society – to ever be with one another that ensures their lasting resonance.