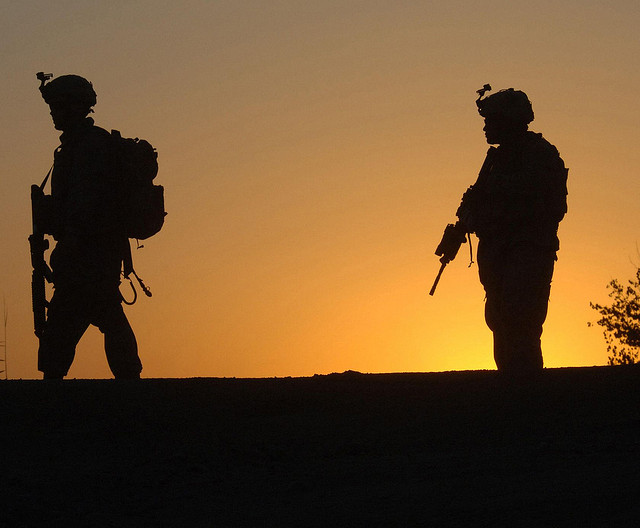 While Iraq and Afghanistan are undoubtedly America’s Vietnam of the early Twenty-First century, both American art and public consciousness have yet to question the wars or even to try to understand them in nearly the same way. The Yellow Birds is a novel that addresses the latter and paints a deeply troubling picture. It is written by Kevin Powers, a machine gunner in the US army who served in 2004/5 and went on to become a Fellow in Poetry at the University of Texas. Since its release, the novel has ridden high on a wave of glowing reviews and praise for the issues it addresses. It is no exaggeration to say that it has been immediately thrust into the canon of American war literature, a burden of extreme gravitas, especially considering the current scarcity of other literature dealing with these wars.

The plot of the novel is fairly simple. It centres on the narrator, John Bartle, and another young soldier, nicknamed Murph. Before the pair are shipped out to Iraq, Murph’s mother corners Bartle into promising to bring her son home. From the beginning, we are told that this is a promise he will fail to keep. Always present in both their military careers is Sergeant Sterling, a deeply disturbed man who delights in violence and is a near perfect soldier. From here, Bartle describes their doomed journey through hell, jumping between memories of Iraq and a troubled return home, with the mystery of Murph’s death always hanging heavily over the story.

However, what’s apparent from the start of the novel is its style. The observation that Powers’ background in poetry has served him well as a novelist is as obvious as it is true. The book is unashamedly constructed of image, simile and metaphor, so that no scene passes without being portrayed to the very best of Powers’ capabilities. Despite this, each sentence is honed down to be only as long as it needs to be in perfect execution of economy of language, and the result is a beautiful and strange combination of maximalist and minimalist writing. Clouds become ‘soiled linens on an unmade bed,’ mortars fall with an ‘orchestral whine’ and, the out-and-out favourite among reviewers: soldiers return home to keep grasping a ‘rifle that was not there.’ It is hard to fault a novel so carefully and poetically written that not a single word is wasted. Nonetheless, such a barrage of literary devices can grow wearisome and leave brilliant images and phrases passed over and forgotten. What’s more, it creates the bizarre idea of the increasingly damaged Bartle stopping in the middle of a war zone to think of apt phrases as bullets and bombs slaughter those around him.

This is to do a disservice to Powers, however. Although he elevates his prose, the content of the novel never shies from the horrifying reality of war. In fact, the bravery of this has been surprisingly neglected in the novel’s reception so far. The meaninglessness of the conflict, the ignorance of the public in America and the evil of having to murder human beings are all embraced with an honesty that is painful and humbling to read. The extravagance of the style is even, perhaps, part of the attempt to come to terms with the trauma of Bartle’s experiences from the perspective of the present, employing the power of language to its fullest to try and make sense out of the senseless. That the conflict is senseless is never in doubt. In one particularly significant scene, Bartle presses Sergeant Sterling for the last words of a soldier he saw dying and who delivered on this unreal Hollywood trope. When he relents, the reality is embarrassingly and terribly believable: ‘Hey, man, check if I shat my pants.’

One of the consequences of the massive amount of attention The Yellow Birds has received is the game of comparing it to canonical works of literature. In the enthusiasm to promote the novel, some have compared it to novels such as All Quiet on the Western Front and Hemingway’s A Farewell to Arms. A backlash has already occurred with some commentators arguing that the novel does not merit these comparisons, but it seems highly unfair to Powers to expect it to. In a sense, the novel has been required to punch above its weight because of its subject matter. Elements of immaturity, that should easily be forgiven in a first novel of such outstanding brilliance in other areas, have been picked on and are hard to ignore after the lofty promises of the book jacket’s quotes. One scene, for example, where Bartle visits a cathedral and talks with a Catholic priest, fails to rise above its clichéd foundations and jars the reader more because of the expectations behind the novel. The comparison with Hemingway is also a little forced. While it is of course fascinating to compare it to an older classic of American fiction dealing with war, the two authors’ styles, approaches and contexts are plainly different.

A much more illuminating comparison would be one with Powers’ contemporary Ben Lerner, another American poet turned novelist, whose debut Leaving the Atocha Station was published in 2011. Both Powers and Lerner show a new wave of American fiction, trying to find direction and meaning in the post-modern world of the Twenty-First century. Their novels could not be further apart in content, but both are very poetically crafted attempts to find a way forward in life and art. Ironically, Powers could be seen to provide something of a pessimistic response to Lerner. In Leaving the Atocha Station, an American student drifts in Madrid on an aimless university fellowship. One could read The Yellow Birds as showing that the enforced order of a structured life would only provide a worse horror for Lerner’s protagonist.

Also like Lerner, Powers is a self-concerned writer, focusing on the individual and ideas of ‘Americanness’. There is very little engagement with the culture or people of Iraq in his novel. However, instead of a blind spot in the book, this comes across as a deliberate choice. Neither Bartle, Murph nor Sterling have any understanding of the country they have been sent to. Their only concern is to stay alive, and, in brief moments, the potentially endless cycle of violence is hinted at, such as when Bartle realises the children they give candy to will soon grow up to fight them and defend their homes. Again, the bravery of embracing this bleak fact should not go ignored. The novel’s message has become even more urgent recently, as the number of US soldiers who took their own lives exceeded the number that were killed in battle last year. The Yellow Birds shows the damage the western world is wreaking on itself through its Arab wars, and the impossibility of understanding the damage being done to the other side. Comparisons with older, great works of American fiction might be inevitable, but we would do better to stay focused on the present, and make this novel a starting point for trying to understand the major conflict of our time.