The Three Types of Reader 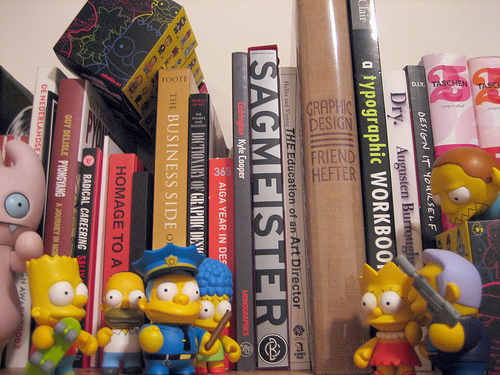 Can you spot the third type of reader?

In the first season of Desperate Housewives, Bree van der Kamp claims to be an avid reader of Rilke. Buffy Summers feigns an interest in Emily Dickinson to impress a handsome if touchy classmate, can quote lines of Frost from memory, and is given a poetry book as a birthday present by Angel (we’re not told which one, but most likely something pre-Victorian). TV’s most prominent poetry evangelist is Lisa Simpson, who has an extraordinarily wide range of interests: she is a fan of Robert Pinsky, enjoys Emily Dickinson and Longfellow, and reserves a special place in her heart for Allen Ginsberg (although, as an eight-year-old, what she makes of lines like “Cock, cock, and endless balls” is open to debate).

Bree reads because she sees cultural awareness as a responsibility, like churchgoing: sometimes an arduous responsibility, sometimes a tedious responsibility, but never an unnecessary one. She would never mix culture and leisure. (The other cultural pursuits she enjoys, like opera, are notable for the undivided attention they require.) Buffy reads because circumstances oblige her to: she demands something specific out of poetry, in this case to find a shared interest with the moody boyfriend. Culture, for her, is the opposite of leisure. Lisa reads for the joy of it: it’s hard to believe that in an exam for eight-year-olds she’ll be able to obtain any extra credit by writing on Ginsberg. For Lisa, culture and leisure are the same thing.

These three positions – culture and leisure do not mix, culture is the opposite of leisure, culture and leisure are identical – are not true or false in their own right. I suspect most peoples’ views on the subject would alter according to their mood or the time of day. Sometimes poetry feels like cake; other times it feels like a descending cake ceiling we must eat through or be crushed by. And other times we’re looking through poetry for reasons which have nothing to do with what poetry has to do with. (I spent this morning racking Ted Hughes for a quotation to back up a questionable point in my thesis.) The three positions are not even mutually exclusive. Hard work can paradoxically be relaxing, and something one enjoys can also be an obligation. But the three positions do, I think, cover all possible stances a reader can take towards a poem: even quite unusual readers. A publisher reads a poem in the hope that he can sell it, falling into the Buffy camp; a censor reads a poem looking for hidden meanings, anxious to let nothing slip past him, falling into the Bree camp; the poet’s boyfriend doesn’t understand a word but is overjoyed that his girlfriend has been published, falling into the Lisa camp.

We can’t choose the way in which we read poetry or anything else; our circumstances make the choice for us. But we can be aware, before we pick up a book, of the stance we’re taking towards the material we’re reading, and we can be vaguely aware of how this stance is going to affect our appreciation. At school, I was made to read Robert Frost and R. S. Thomas; after that, it took years before I could wring any enjoyment out of them by reading them for pleasure. (Now Frost is probably my favourite poet, though I still don’t have much time for Thomas.) Reading something for some reason which has nothing to do with what it is you’re reading (I read Frost at school to pass exams, not to find out about birch trees) is a great deadener, but an awareness of different types of reading can help you overcome each type’s limitations.

Finally, a postscript. While I was writing this I tried to come up with any more characters from film or TV who read poetry, and couldn’t think of any. Rory from Gilmore Girls seemed an obvious candidate, but all she reads is Melville and Shakespeare. (I’m only up to Season 2, so obviously this may change any time soon.) I still haven’t seen Battlestar Galactica or The Sopranos, but I can’t imagine who’d read poetry there. Nor can I explain this dearth of poetry on television, or why the only characters who read it seem to be weirdos. All suggestions are gratefully received.