The Temptations of ‘Chocolat’ 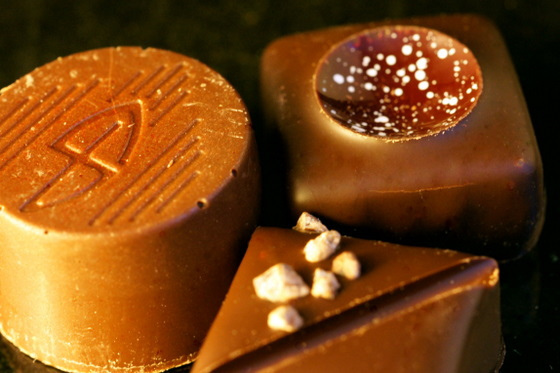 “the chocolates ‘gleam darkly’ as objects of pure temptation…”

Having given up chocolate for Lent, I’m currently writing this article with the help of (many) ginger biscuits instead. As the novel Chocolat by Joanne Harris is possibly one of the most tempting and seductive treats in the literary universe, even writing about the way Harris evokes tastes, flavours and textures is sheer torture. Epitomising one of the most difficult inner battles between the spiritual and the carnal, self-denial vs. self-indulgence, Chocolat is an irresistible read. Set in the fundamentally Catholic world of post-war rural France, Vianne Rocher’s magic chocolates enchant the village… not to mention every single person who reads the book. Here goes… let’s hope I haven’t broken my Lent resolution by the end of the article.

One of the most striking things about Chocolat is the overwhelming presence of food, particularly chocolate. It’s everywhere: mentioned casually at breakfast, at parties, at Vianne’s work. The first thing the priest describes is his daily diet, and food, particularly chocolate-flavoured indulgence, is constantly held over the parishioners’ heads as an example of temptation into sinful, ‘subtle naughtiness’. Chocolate and food are the driving force of the novel; it is them that ultimately provoke Reynaud’s meltdown, but they also form strong links of love and friendship between the inhabitants of Lansquenet. Sharing a cup of hot chocolate (which seems a lot more like melted chocolate with extra sugar than what English people would call hot chocolate) creates love and trust between the villagers, as well as with the river gypsies, whom they have previously avoided and treated with utter contempt. Self-indulgence when it comes to food is positively celebrated, using the inclusive nature of the chocolaterie in stark contrast with the strict, grand, but inaccessible church that Reynaud, the cure, personifies.

However, it is Harris’ prose that really seduces the reader. The very description of chocolate-making as ‘a kind of alchemy’ reinforces its magical, almost spiritual nature: the transformation of these bitter cocoa beans into ‘this wise fool’s gold’. The magical elements of chocolate-making are reinforced when it is traced back to its Latin American roots: Harris refers to Aztec gods, rugged and unforgiving landscapes which all combined to create ‘The bitter elixir of life’. Vianne suggests that it is this implicit wildness, the complete abandonment to one’s most primal senses, giving in to touch, taste and smell which threatens Reynaud the most. Through chocolate Vianne has access to a sixth sense; almost a second sight. The sensuality that accompanies both the production and consumption of chocolate seems to amplify human senses to the point where Vianne receives foreboding premonitions in the vapours of the chocolate. Chocolate presents a link to a far-off land and distant civilisations, where the world is ‘a wider, wilder place’.

What is also interesting is how Reynaud, the village priest, reacts to this invasion of chocolate during Lent, which is supposedly the Church’s most holy season. Although he expresses no small amount of contempt for both Vianne and his parishioners, what is striking is his internal struggle; how much he clearly wants to give in to his more primal desires. On first encountering the chocolaterie he notes the display in painstaking detail, the ‘Aladdin’s cave of sweet clichés’ where the chocolates ‘gleam darkly’ as objects of pure temptation. Although it is noted that he himself only eats soup, bread and fruit during Lent, beneath the maniacal self-denial lurks desires that shock even him. Fear is clearly at the root of his scheming and plotting, as when he comes across one of these ‘forbidden fruit’ he compares it to a ‘taste succubus which has me moaning’. The comparison could hardly be clearer: indulgence with food is compared to sexual indulgence, and evidently Monsieur le Curé is terrified of indulging himself in either, at the behest of the Catholic Church. Reynaud strikes me as a relatively sad character. He is bound to the Church, simply wanting his parishioners to love, yet fear him, whilst instead he comes to be overshadowed by a woman he despises: ‘I try to infuse the sermon with our own seductions, but the dark glories of the Church cannot compare with her magic carpet rides’.

Sweet treats, chocolate, even food in general all play a fundamental role in Chocolat, an observation that can perhaps be considered redundant, given the novel’s title. Vianne Rocher’s chocolaterie evokes all our senses and all our desires (my mouth is still watering); taking us into a magical world where, instead of being frowned upon, self-indulgence is lauded and encouraged. And, really, where else does that happen? In a world fraught with problems such as famine and economic crisis many forms of self-indulgence are looked upon in the harshest light possible; you only need to look on the Daily Mail website to see the proof. Although one might think that a book such as this, which celebrates the sensual and the immediate, has no place at the solemn nature of a festival such as Easter, in fact it doubles as a joyous story of rebirth, friendship and love. The bonds formed over chocolate don’t just melt away with the passing of the seasons. The magic that Vianne spreads over the village of Lansquenet-sous-Tannes lasts even after she leaves, as the self-deprivation of Lent loses its fatalistic solemnity and gives way to compassion and care. Whether eating and wanting chocolate is presented as pagan or not, it certainly seems to bring out supposedly Christian values. So, with that excuse, what’s to stop me tucking into my secret stash of Easter eggs right now?