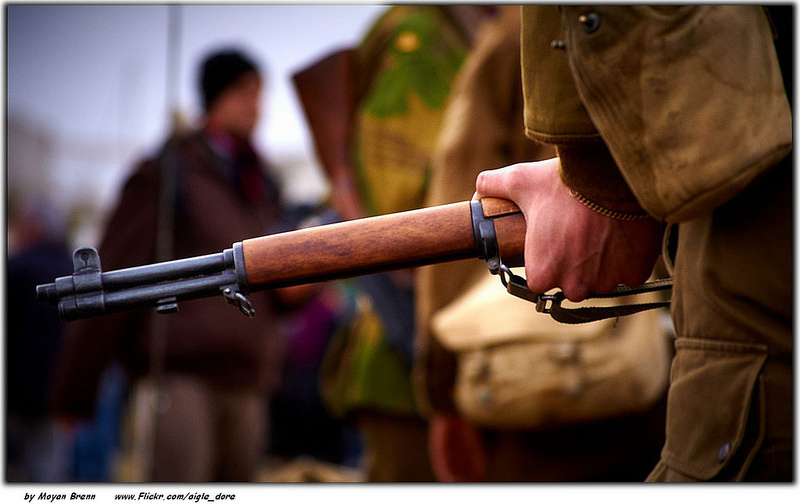 Are romanticised portrayals of war a way of dealing with atrocity?

Yet, Louis de Bernières describes the scene beautifully in his novel, making it all the more potent through this beauty. ‘The carnage had none of the ritual formality of such occasion that film and paintings might suggest. The victims were not lined up against the wall. They were not blindfolded, faced away or faced forward. Many of them were on their knees, praying, weeping or pleading. Some lay on the grass as though they had already fallen’. The author manages to create beauty in the chaos. But is this beauty deserved? And is he creating beauty where there is none – where there is, instead, only the chaos of war?

War is romanticised. There is no denying this. In the last few days, a 90 year old Nazi soldier was convicted in absentia for the massacre in Cephalonia – the very same massacre described in Captain Corelli’s Mandolin. And yet, these two images somehow seem incompatible with each other. The idealised scene portrayed in the novel somehow does not seem to fit in with the conviction of a soldier in the ‘real world’. And in this way, war has been disassociated from reality, placing it on a plane above and beyond our own.

In Captain Corelli’s Mandolin, the theme of music pervades the novel and provides a stark contrast to the destruction of war. In a way, the beauty of the music makes the horrors of war less execrable. Music lifts the characters’ spirits, making the war seem insignificant and the beauty of music and love all the more paramount in contrast. At one point, the novel reads: ‘how wonderful it was to be at war. How we whistled and sang as frantically we prepared to move’. On one hand, the whistling and singing seems to provide a sense of relief and a way to escape from the war. However, on the other hand, there seems to be a discord between the ‘frantic’ preparations and the joyful music. This highlights how, not only in novels but also in reality, the horrors of war are not quite comprehended, or accepted. War is romanticised, the soldiers are heroised, and the whole affair is made more jovial. This is far more appealing than writing about the horrors and destruction of war. Captain Corelli’s Mandolin portrays this by having war as the backdrop which runs through the entire novel, but this is overshadowed by the themes of music and love which are paramount in this novel, and make the war insignificant in comparison.

Louis de Bernières also uses Homeric themes throughout the novel, which monumentalises the theme of love. This also gives the novel mythical weight and makes all the different types of love all the more grand. Captain Corelli and Pelagia’s love is a form of forbidden love, because they stand on warring sides. However, this makes their love even more romantic – this relationship caused by the war is the most romantic in the novel. Pelagia’s relationship with Mandras is lacklustre, but with Corelli it is exciting and romantic. This, again, serves to highlight the romanticisation of war. Although the war itself is not romanticised through their love, the effects of it, including the relationships that it induces, are seen as exciting and romantic and all the more special because they survive amidst the destruction of war.

The way that history has been portrayed through literature has a lot to do with the romanticisation of war. However, this is not a deliberate falsity. Instead, it is human nature. We enjoy adventures and romance and stories which make us feel good about the world. The romanticisation of war reflects the attribute of human nature which looks for meaning, and good, and reasons for pain and suffering in the world. By romanticising war, the reader does not feel the futility of war; instead, there is beauty and meaning in the world. Fates, meanings and purposes are fulfilled: two strangers fall in love, the soldier has become the hero and the small Greek island has told its story.