The Literarius Curse Infecting Muggledum: A Boon or an Abomination? 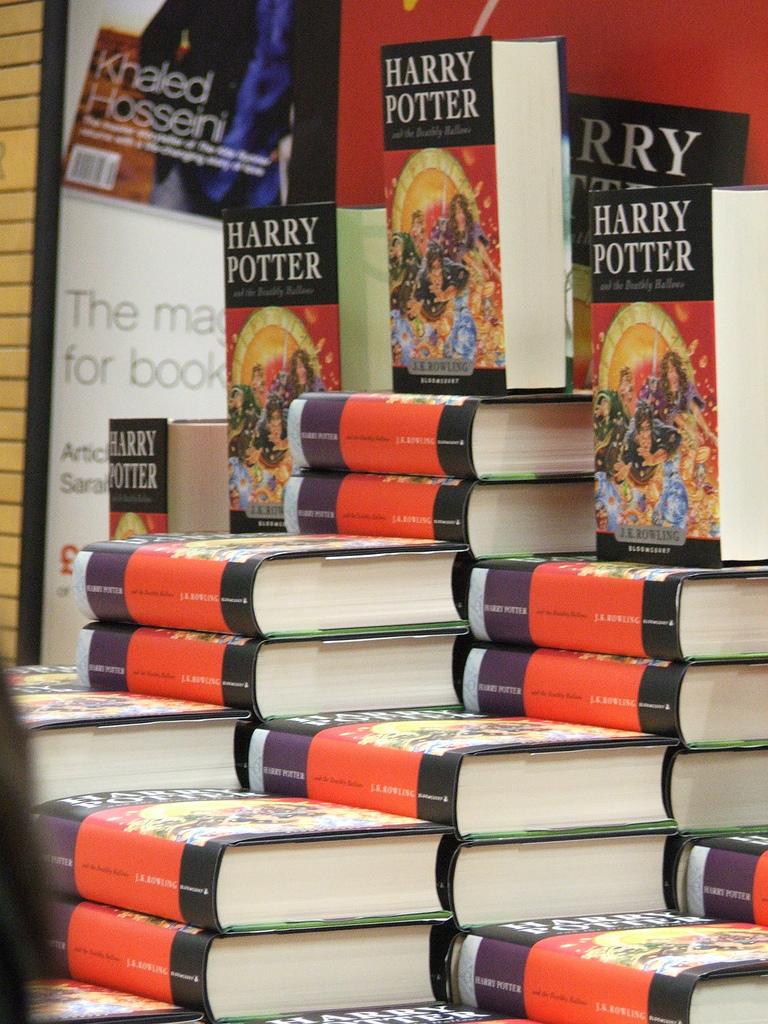 Are Harry Potter Books the only books on the shelves?

There has been much debate recently over the decline of reading as a hobby, and the need to encourage all young people to pick up a book once in a while. With such a fear among parents and teachers alike that little Jimmy never will take the time to read Swallows and Amazons, or hasn’t even heard of The Great Gatsby, certain modern authors have come to be held by many as beacons of hope for the youths of the 21st Century. But despite general appreciation of writers such as J.K. Rowling and Stephenie Meyer, there are still many scholars and critics who sneer at the acclaim of their works. In response to these polarized outlooks I would like to take a moment to consider exactly why people appear to have such strong and opposing attitudes, and whether or not these attitudes are well-founded.

I would definitely say that much of my education probably comes indirectly from reading, and it is likely that my grammar and vocabulary have improved in the process. But when I ignore that overdue essay and bury my head in an old copy of Harry Potter or (dare I say it) Twilight, am I really doing something constructive? Is it really enough to convince yourself you can read Latin purely based on your extensive arsenal of Harry Potter spells? Some people might say that cult-reading experiences such as the works of Rowling and Meyer are not in fact enriching the lives of their readers in any productive way, but giving a reading experience based purely on diversion from real life and enticement into a world which readers can never truly enter. Critics may even argue that, whilst a reading of ‘literary’ texts such as Little Women or Shakespeare might give readers some knowledge of a new culture, moral code or historical period, the Twilights and Harry Potters of the fantasy genre are not teaching readers anything but dissatisfaction with their own world. Perhaps we are being naive in thinking that such books are really introducing people to the world of literature; there are no doubt many people out there who regarded Harry Potter as a one-off reading experience, and haven’t picked up a book since.

The issue perhaps lies in the fact that such crazes as Harry Potter and Twilight rarely remain purely as books; they have permeated the everyday lives of their younger readers in a plethora of different media such as online content, computer games, and film adaptations. In such a way the readers’ love for the narrative is increasingly distorted until the excitement of the reading experience is completely undermined by a fanatic adoration of the content; that is to say, people forget that they enjoyed the action of reading and believe they can immerse themselves in that magical world to the same effect simply by watching the film or playing the game. I certainly believe in encouraging children to explore literary worlds further through other literary mediums such as the online experience Pottermore, but I am concerned that if people forget that Hogwarts was originally only reachable by reading, then they may forget too that there are thousands more books on the shelves today through which they could explore many more exciting new worlds.

While such concerns as these may seem reasonable, they are by no means related to the arguments of those sceptics who scorn these items because they do not consider them to be ‘proper literature’. This depends entirely on the point of view that the term ‘literature’ only includes texts focused on educating the mind or instilling good grammar and lexis. But there is definitely evidence to show that this is not the case. Of course, it is true that a wide vocabulary may come in handy when a friend is showing off the Scrabble app. on their iphone, but sadly this lexical smugness doesn’t quite make up for the fact that they’ve still got one iphone more than your ‘triple word’ square can ever give you. In actual fact with regard to everyday life such skills gained from reading are no longer fundamental; with autocorrect, online dictionaries and the ‘synonyms’ button society’s deteriorating literacy is encouraged by the available technology as much as it is by the neglection of a good, old-fashioned hardback. So why are we encouraging the general populace to read more? Why do we praise authors such as J. K. Rowling for bringing thousands more readers to the literary scene?

To my mind, it seems that almost any form of reading has a positive influence because it shows people that they can still find enjoyment in something which doesn’t require money or electricity, and demonstrates that children are comfortable in their own company. Reading teaches us to think and form opinions independently. Literary scholars might refute Rowling’s right to such public acclaim as she has received, but in the face of bare facts they simply cannot deny its existence. Professor McGonagall declares in the very first chapter of the first book that “There won’t be a child in our world who doesn’t know his name…” Little did J. K. Rowling know the prophetic value of those words! By 2008, Harry Potter had sold over 400 million copies; very roughly speaking that is one book per every seventeen people in the world at that time. I will always defend Rowling’s works no matter what critics may say about the plot or style because the Harry Potter series brought people to literature who had never previously ventured to try it. Perhaps sometimes scholars of English forget that, when all’s said and done, even William Shakespeare didn’t confine himself to traditional and correct literary practice; to early seventeenth-century muggles he was just making new words up as he went along. And they loved it.