The Heart and Stomach of a Poet

Sarah Parkin in Literature on 1 February, 2012. 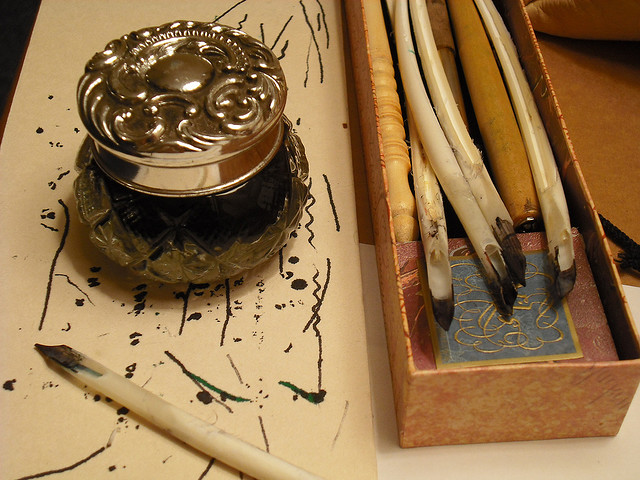 Who is the greatest writer in the English language? The standard answers, I suppose, will all be flying around: Shakespeare, Chaucer, Dickens, Austen, maybe even Wilde or Joyce. It’s a common argument among book-lovers (though I must say, Mansfield Park would be massively improved by the addition of a dragon or two), and one which often produces less obvious answers too. Take, for example, George Puttenham; in his 1589 work The arte of English poesie, he sings the praises of “the Queen our sovereign Lady, whose learned, delicate, noble Muse, easily surmounteth all the rest that hath written before her time or since” (his spelling is worse, but you get my drift).

Now obviously, Puttenham needs to keep his queen sweet, so there is an element of flattery here, but it seems he has a point: in the sixteenth and early seventeenth centuries, Elizabeth I was a highly respected literary figure. There are plenty of debates to be had about whether speeches or letters can be counted as literature, but as well as her prolific output in those areas she produced a substantial amount of poetry in a variety of languages, many of which circulated in manuscript form around her court.

If anything, the real surprise is how her literary output has been forgotten in the intervening 400 years, though there are reasons for this. As most people know, the reign of Henry VIII’s middle child was eventful, to say the least; exploration of the New World, the Spanish Armada, the imprisonment and execution of Mary, Queen of Scots, the succession crisis when she failed to marry and produce an heir, religious intolerance in England matched by religious war on the Continent, and the small matter of what many still consider to be a ‘golden age’ of the Arts in England. Given her pivotal role in one of the most fascinating eras of English history, it was to some extent inevitable that she would be predominantly studied in light of her political, social and religious roles.

Even for specialists in literature of the period, it’s difficult to study writing of this type: writers at the Elizabethan court would frequently share their verse in manuscript form around select circles of friends. Unfortunately, this meant that they often didn’t bother putting their names on the manuscripts, and since they copied down each other’s work with varying levels of accuracy, there can be several different versions of any given poem floating around at once. This means that, even if you do happen to work out who wrote a poem, it’s hard to be certain which version is the original, let alone whether the author might have changed it themselves later on – there’s rarely a single stable ‘text’ for a reader to refer to. Still, this is a problem faced when reading any of the Elizabethan court writers, but people are still reading Philip Sidney and Walter Ralegh, and since a of Elizabeth is now on the market, it’s time this poetess got the recognition she deserves.

I wouldn’t go as far as to agree with Puttenham – she may not be the greatest writer in history – but she is surprisingly good. It’s interesting to think about how her poetry plays into the propaganda which circulated about her during her lifetime. Woodstock, where she had been imprisoned during her Catholic sister Mary’s reign, had become something of a Protestant tourist attraction after she had taken the throne; on the wall was etched ‘O Fortune, thou wresting, wavering state’, a poem written during her incarceration in which she justifies herself as an innocent victim who will be vindicated and restored to her rightful place at the head of the English people while her enemies are punished. In her later years, when the famous image of the Virgin Queen was becoming more established, she replied to poems directed at her by her courtiers in exchanges which overlaid the language of loyalty with that of love, using the common tropes of romance to reinforce bonds of service. These were the poems which were allowed to circulate freely so as to cast her in the best possible light.

That wasn’t the case with many other poems, though. In fact, there are some which scholars are fairly certain were suppressed during the Queen’s lifetime. By the late 1580s and 1590s, when it was obvious that Elizabeth would never marry¸ she was writing poems such as ‘Now leave, and let me rest’ and ‘When I was fair and young’, in which she admits her regret at not marrying sooner and dramatises her own melancholy. They’re heartbreaking, demonstrating the vulnerability of a queen who needed to be strong and unflinching in her later years as murmurs of rebellion began to grow; her enemies would have loved them.

It might be surprising that a powerful ruler like Elizabeth I managed to produce a body of poetry, especially given how much has probably been lost over four centuries, but it really is worth a look. It ranges in tone from quiet menace to bold assertions of dominance via the sadness of a lonely old woman who found herself a victim of her own position; it certainly proves that Good Queen Bess was more than just Queenie in Blackadder. In any case, it will help you decide whether she really did have the heart and stomach of a concrete elephant.