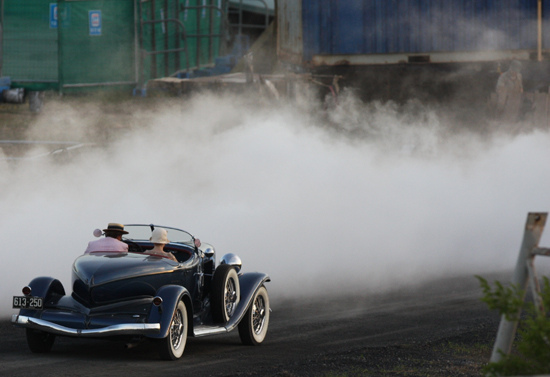 A novel which is “curiously heart-rending in its unbearable fragility and hopefulness”.

Fitzgerald’s classic, The Great Gatsby, is one of America’s best-loved books. This year, having read and hated it at A-level, I decided to pick it up and give it another try, which turned out to be one of the best decisions I made over the Easter break. Although it has become synonymous with the brash 1920s, for me, part of the book’s charm is the shimmering, delicate quality of the prose: there is something uncertain, something desperately hopeful yet fatalistic running through the novel. The way the book develops, and its beautiful language, puts me in mind of an iridescent bubble: slowly it grows and grows, until eventually Gatsby’s dreams are shattered and the reader’s with it. With the bubble gone, we see it could never have truly been possible, that this was as carefully constructed as Gatsby’s parties. Illusions and appearances are absolutely essential to the book: it is built around the shallowness of society, and so is Gatsby himself; he becomes the ultimate self-construction.

Illusions and appearances are reflected in the style as well as the characters. Although many have expressed doubt that a big Hollywood blockbuster can do it justice, to me the style of Luhrmann’s filmmaking could work with the novel. ‘Style over substance’ seems to prevail: although this sounds damning, atmosphere and imagery often triumph over plot movement, except towards the very end, exemplified in the breakneck car journey. While this emphasis produces beautiful imagery, ‘in his blue gardens men and girls came and went like moths among the whisperings and the champagne and the stars’, it can also befuddle and bewitch the reader. At the end, for example, it takes several attempts to realise that the object floating in the pool is actually Gatsby’s body. Every character seems to hide something: even Nick Carraway’s assertion that ‘I am one of the only honest men I have ever known,’ leaves a lot to be desired. This constant instability contributes to the fragile nature of the book – there is nothing solid to hang on to, from Gatsby’s colossal faux-Grecian-Georgian mansion, to Nick’s unreliable narration, to ‘waiting for the hottest day of the year and then missing it’.

Perhaps the most ambiguous and illusory part of the novel is Gatsby himself, just like the shadowy figures who whisper about him: was he a bootlegger, an Oxford man, a German spy? The crushing reality is that he turned out to be nothing, much – but what do we really think of ‘old sport’? Is he just a fantasist with beautiful silk shirts? Do we believe his smile, ‘one of those rare smiles with a quality of eternal reassurance in it’? What we are supposed to think of Gatsby is left ambiguous. Personally, I think he is quite a pitiful character: the original outsider looking in at everything he can never have, lost in the strength of his own delusions in his ‘ghostly heart’. Because really, was Daisy, thoughtless, shallow and self-obsessed, worth it? For me, this short quotation sums up Gatsby best: Nick Carraway can describe his parties and his house and his smile but in reality, Fitzgerald constructed Gatsby to fall, to show that men who dream too hard for too long lose sight of themselves along the way.

According to Nick Carraway, the book’s narrator, we are ‘borne back ceaselessly into the past’: and perhaps this is what is so charming about reading The Great Gatsby over and over. The world Gatsby inhabits is illusionary, but so is the myth of our own past, the legends that spring up around one’s own identity. In reading this book, visualising the ‘floating rounds of cocktails’, imagining Daisy’s voice, ‘full of money’, we can create our own myth, go back to a world which may not have even existed in the first place. Fitzgerald offers us both the charmed, hollow life on Long Island, ‘sea-change of faces and color and constantly changing light,’, but also the grey, foreboding banality of the Valley of Ashes, where Gatsby ultimately meets his doom. The ethereal compared with the stark, dreams brought crashing down, The Great Gatsby is curiously heart-rending in its unbearable fragility and hopefulness. We can all, to a certain extent, identify with the outsider, which is perhaps why, despite being such a remote and puzzling character, the book has lasted so long and is considered one of the classics of American fiction. The characters are not admirable; their world is not enviable in its shallowness and conspicuous consumption. Yet it strikes a chord. We want to be, need to be, on the inside, or need to appear to be on the inside. Particularly with the contemporary emergence of social networks, illusions play as great a part in our society as it did Fitzgerald’s, adding an extra dimension and empathy to Gatsby’s plight. Both humanity and lack of it is reflected in Fitzgerald’s language, from love to infidelity to passion to longing to deceit. By the end, like Nick, I am ‘simultaneously enchanted and repelled by the inexhaustible variety of life’.