The Colour of the Curtains 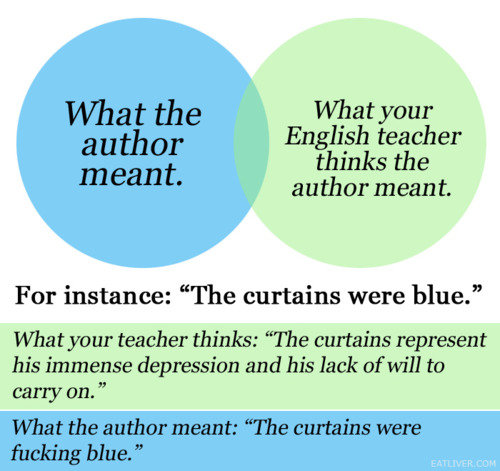 Does an English literature course really just consist of “making it up as you go along”?

Most people don’t seem to know quite how to react when you tell them you study English Literature. While it holds a certain amount of academic prestige, there is still a struggle to see what the purpose of English as a subject really is. Admittedly, it’s hard not to feel a little self-conscious at times, sitting down in the library next to someone with towering stacks of textbooks and notes on their desk, only to pull out a little novel to read as your work. George Steiner’s 1965 essay ‘To Civilize our Gentlemen’ highlights the rather uncomfortable idea that studying English might just be a way to read stories for a few years before settling down to a real job in the real world. As unsettling as this widely-held opinion may be for an English undergraduate, it does present an opportunity to collect some great reactions from those who hold it. I found my personal favourite last Christmas, when I told an American family friend (clearly a man of the sciences) that I studied English. He stared at me, confused and a little curious, before replying: ‘and you…enjoy that, do you?”

About a year ago, the internet came up with a meme illustrating this common, skeptical response. It might just be a meme, but in the fifty or so times it has been quoted to me it has been presented as indisputable proof that studying texts essentially consists of making it up as you go along. The meme reads:

For instance: “The curtains were blue.”

What your teacher thinks: “The curtains represent his immense depression and his lack of will to carry on.”

What the author meant: “The curtains were ****ing blue.”

Apparently, this is the last word on the matter. Even more bizarrely, a lot of readers and writers on the internet love it as well. For them, it is a rejection of snobbish literary fiction in favour of supporting proper, narrative storytelling. Actually, this is not such a rare reaction. The last person to quote the meme to me then went on to talk excitedly about The Hunger Games, and how much better the book is than the movie. It might not be such an attack on reading at all, then, rather a defence of good storytelling which says what it means and refuses to hide obscure meanings. This, at least, is surely better than dismissing reading as a pastime entirely.

Except, surely this concept renders the words of the meme merely an example of really bad and, worse, boring writing? If the sentence literally just means that “the curtains were blue” then who cares, and why is it even in this hypothetical novel? Most readers have seen curtains before, and therefore are not going to need a reminder that there will probably be some present in any room, nor require the rich added detail of their being blue. You can only hope there is going to be a shoot-out in this hypothetical, blue-curtained room; otherwise the literature people are championing is going to be very dull indeed.

Another problem with this attitude is evident in the punchline of the meme, with the implication being that whatever the author intended when s/he was writing is a ‘correct answer’ of some kind. But why is what the author intended so important? Obviously the author’s intention matters, but if that alone is the whole picture then why should we even read the book, when we can just ask them for it? Better yet, the author could tell us what they intend to say in the first place and save themselves the trouble of writing at all. The importance of our interpretation of someone’s writing is not in finding something we can verify as the ‘correct answer’, but in developing our own personal response to that writing. This illuminates our thinking and takes it in new directions; a process that is important, even if we are denied the satisfaction of being definitively ‘right’.

Perhaps the teacher’s reading says something about his class. He might be immensely depressed by his boring students, who want nothing more than an easy answer and are satisfied with the idea of blue curtains. If so, it’s easy to sympathize with his interpretation of a ‘lack of will to carry on.’ And yet, however much the students may want them, easy answers do not really exist in literature. The blog ‘All About Growing up and Becoming a Famous Author’ writes in support of this meme, but at the same time its writer unwittingly illustrates the impossibility of sticking to the meaning on the surface. After asserting that sometimes the curtains are just blue, she goes on to say ‘And he bought the blue curtains because he was broke and they were on sale.’ So, surely the curtains are not just blue then, because we can read something about their owner into them? Ultimately, we cannot help interpreting to some extent.

This is the beauty and difficulty of English. It rejects the easy answer, the self-satisfying experience of agreeing with each other that we’ve worked it out, got it right and can now move on without another thought. Of course, this does not mean we can read whatever we want into a text. There may be no right answer, but there are also a lot of wrong ones. This is the challenge and it’s good that the challenge exists. The meme might be a joke at the expense of overly-enthusiastic English teachers, but even if the teacher’s response is overblown it is still a lot more interesting than plain, meaningless blue curtains. If that really is all they are, however, if they mean nothing beyond the fact that they are there, then the author should tear them down. To quote novelist Ned Beauman, ‘the biggest crime that a book can commit is to be boring.’ Nobody cares about the colour of the curtains.