The Bell Jar and Publishing 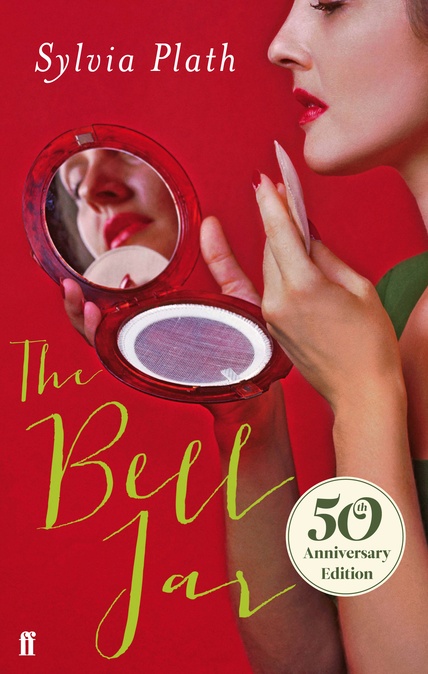 Faber’s redesigned cover for The Bell Jar, over which
“the internet exploded with voices of protest”.

Sylvia Plath’s literary reputation lies mainly in her incredible skill as a poet, but there are many people who remember her primarily as a novelist. The Bell Jar, her only novel, was published just weeks before her tragic suicide at the age of thirty, and draws upon her youth and struggle with mental illness. It is a vivid, immersive and fiercely evocative portrayal of post-war America and the hypocrisies and sexism that dominated women in society. It is also often hilarious in its satirical voice, cutting in its observations and affecting without descending into hysteria or indulgence concerning its narrator’s and author’s suffering. For all these qualities, it still occupies an uncertain middle-of-the-road position in American literature, overshadowed both by Plath’s poetry and other cult classic novels of the period such as Salinger’s The Catcher in the Rye or Kerouac’s On the Road. This year is the fiftieth anniversary of its publication and has been marked with the release of a new edition by publishers Faber.

Such anniversary and other special editions are becoming increasingly important today. With the explosion of e-books dominating the market in only a couple of years, the printed book is fighting to distinguish itself. Any book that can claim to be more than a run-of-the-mill paperback is a declaration of what physical books can do that their digital counterparts cannot. Smaller publishing companies such as The Folio Society and Slightly Foxed have been championing this cause and excelling in it by producing exquisitely printed and bound books that are a pleasure to hold as well as to read. This is especially important for the classics or more obscure books as it distinguishes and keeps them visible when they could otherwise disappear in a digital market. Many articles on literary affairs argue determinedly that the book will not die in the onslaught of the digital boom. However, the truth is less dramatic and a little bleaker. Of course the book won’t die; the real question is how severe the amputation will be.

In the ongoing developments of the publishing scene today, the majority of books that are read are those in full view. The well-publicised success stories, established names and regulars of the Amazon Kindle charts are fighting amongst each other to get a bigger slice of the pie, not to get to the pie in the first place. Previously, the playing field was a little wider. In a physical book store, every book has a fighting chance to be discovered as long as it is stocked. With e-books, however, the model is heavily tilted towards what is presented to the customer on the immediate chart pages. After all, who can find a book with a search bar that they don’t know exists?

This brings us back to The Bell Jar and its new fiftieth anniversary edition produced by Faber. In designing it the publishers had a choice: either to celebrate and try to cement its position as a classic, or to heighten its visibility to attract more readers. Whether intentionally or not, the latter was certainly achieved by their chosen cover design. It shows an elegant young woman touching up her make-up in a compact, her face reflected back at us in the mirror. The internet exploded with voices of protest, defending The Bell Jar against the demeaning charge of being chick-lit, as suggested by the cover image. Dustin Kurtz of the American publisher Melville House perhaps came up with the best summation of their opinion: “How is this cover anything but a **** you to women everywhere?” Undoubtedly, the cover hints at a piece of commercial fiction targeted at a women’s audience, no bad thing in itself, but also not what The Bell Jar is.

Or perhaps it is, as The Times Literary Supplement would argue. In the February 8th issue, it smugly points out the precedent for the cover from a scene within the novel: “whoever designed the new cover knows The Bell Jar better than its defenders.” And yes, the TLS is right to point this out, but it also fails to mention that this scene in the novel conveniently fits the commercial angle for selling the book. There are also many scenes of throwing up in The Bell Jar. It even provides one of the book’s most memorable and funniest lines: “There is nothing like puking with somebody to make you into old friends.” Yet, the stringent literary values that the TLS implies may falter at the prospect of selling a book with vomit on the front cover.

Nonetheless, the key word here is sell. For better or worse, publishing is a business and books need to be sold. This is not necessarily a bad thing, however. Strip away the headmaster-like pretension of the TLS in “just think: all that tweeting and blogging time could have been devoted to reading” and there is an important truth there. No matter how it is achieved, more people finding and reading such a deserving novel as The Bell Jar can only be a good thing. Perhaps then, if this cover earns it enough readers to secure its position without the need of future marketing, we may see the edition the novel deserves one day. It’s just a shame we may have to wait for the hundredth anniversary to see it.