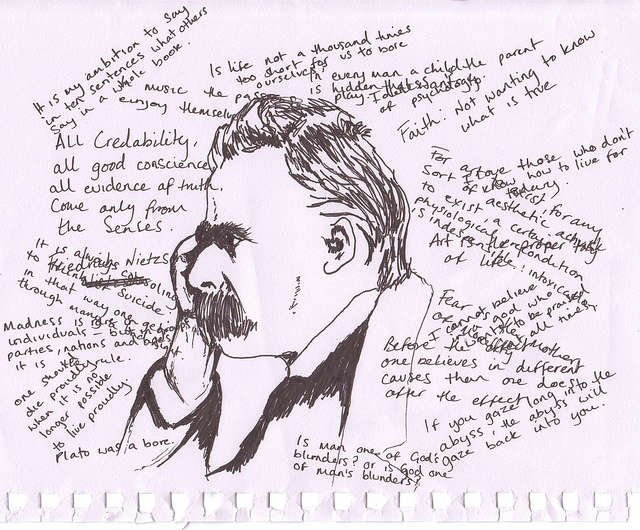 “You have your way. I have my way. As for the right way, the correct way, and the only way, it does not exist.” – Friedrich Nietzsche

I attended a lecture recently in which the professor’s essential thesis was that the critical meaning of a text – its ‘essentiality’, if you will – is divorced from any arbitrary emotion. By this he was referring to emotion of the writer potentially fuelling the piece, as well as emotion of the reader potentially weaving a garland of subjectivity into the piece. As was to be expected, chaos ensued; even the stereotypically reductionist philosophy undergraduates, the target audience of the talk, simply could not see how the emotions of reader and writer could be extricated from essential meaning – surely (they argued) that would constitute a misunderstanding of the text? Even a misplaced purpose?

Whilst I remained largely ambivalent over the course of the debate the arbitrariness that literary criticism has developed into struck me. Whilst I agree that this ‘distance’ is necessary, given the form that ‘criticism’ has as a whole developed into, particularly in terms of philosophy, I am well aware of how it may be frustrating. The very fact that literary criticism has lately reached the point where critics must be critical of the decline of criticism puts your day-to-day reader at a dangerous distance from viewing any literary medium through a structured, objective lens. The divorce of medium from medium can seem overwhelming and, to be frank, self-consciously pretentious – pretention in its most frustrating form.

In many ways literary criticism can often seem ironically subjective. For example, Freudian criticisms (to cite the common example) are tinged with Freud’s own interpretations of psychology. If his ideas are considered ‘critical analyses’, and yet are still subjective, why should emotional reactions not be considered equally significant for others? Emotional reactions ought to be appreciated in their own subjective right; in the same way that a text may be appreciated as being ‘Freudian’ or ‘Realistic’. On the other hand, the intermeshing of the different strands of criticism into a single ‘mass’ is perhaps what we need; an objective view accounting for all, or at least all that we are able to. If only that were possible!

This, unfortunately, is an inescapably cyclical debate. Each mind represents a different ‘mass’, and so here are some insights into some of the more respected minds on the scene of literary criticism:

Samuel Johnson: As (naturally) enthusiastic readers of poetic epic, this may shock you… Dr. Samuel Johnson, renowned 18th Century literary critic, supposed single-handed writer of Johnson’s dictionary, composer of The Rambler (yes, that Samuel Johnson) did not like Paradise Lost. He found it difficult to read and overly complex, and even criticised its moral grounding. This kind of view is often dismissed as shallow and too narrow, which in itself demonstrates issues with literary criticism. We do not know where to draw the lines. What’s more, Johnson advocated a changed ending to Shakespeare’s King Lear, which was subsequently the only version performed for a considerable number of years. He found it too emotionally hard-hitting. Interpret that kind of ‘poetic undercutting’ as you may!

Alexander Pope: Verse satirist and 18th Century poet Alexander Pope is latterly renowned as representing the epitome of arbitrary readings; arbitrary, I find, in a fantastically clear and poignant way. He also never grew taller than 4″6. I cannot help but wonder whether or not this ‘deficiency’ had any ‘inherent bearing’ on his work…

T.S. Eliot: Eliot’s poem ‘Gerontion’ was accused of anti-semitism for its implicit negativity towards Jews. Craig Raine argued against such allegations in his book In Defense of T. S. Eliot; an argument that has also been criticised as flawed. Terry Eagleton has since pointed out that Eliot’s literary merit has been established without a doubt, regardless of any prejudices he may have had. Perhaps this is an example of a circumstance where a work must be analyzed in two individual paradigms; that of ‘motive’ and ‘what is on the page’. On a lighter note, Eliot also published a book of poems on the practical psychology of cats, Old Possum’s Book of Practical Cats, hence Eliot’s nickname ‘Old Possum’.

Gloria Watson: Watson also writes under the pseudonym bell hooks (intentionally uncapitalized!), perhaps in an attempt to be objective by using her grandmother’s name. Though a somewhat paradoxical attempt this is, for me at least, a part of what characterizes her: acceptance of the impossible, but continuing efforts to push alongside and through the impossible regardless. Her advocating of ‘intersectional feminism’ (a feminism that attempts to account for all ‘brands’ of society, accepting the inevitable subjectivity we each have but trying to overcome it nonetheless) demonstrates how we cannot fully incorporate all perspectives, but we can try: a notion I find applicable to the study of literature and literary perspectives. We cannot see ‘all’ ideas, but we can take into account as many as possible; identifying and analyzing as many of these approaches as we can, and only making a judgement after this has been done.

Friedrich Nietzsche: Nietzsche is perhaps most famous for his notion of ‘the superman’, (a goal for the hypothetical man to set himself so that he may become the best that he may be) and his interpretations of relationships through the binary of ‘master vs. slave’. Whilst many do not take so extreme a view as Nietzsche, they have not completely rejected his theories, or stopped his proposals from becoming archetypal in their own way. That said, Nietzsche himself criticised Socrates as ‘a buffoon who got himself taken seriously’, implying that perhaps he was slightly quicker to reject the theories of others!

Virginia Woolf: Like T. S. Eliot, Woolf is generally known for her modernist criticism of literature, arts and culture. However, what is interesting when reading a little more closely is that in her own criticism Woolf almost seems to criticize the critic. This is even present in her novel Orlando, which is not even a formal ‘critical essay,’ where she ambivalently mocks past critical ideas.

What reigns as clear throughout Woolf’s critique, as well as the other examples, is that critical opinion is one of ambivalence; understanding and accepting one’s own flaws as well as those of others, and accounting for the limits of human experience. Even in writing this article I am arguing with myself! Criticism is inconstant, and we are each human and irreducible.