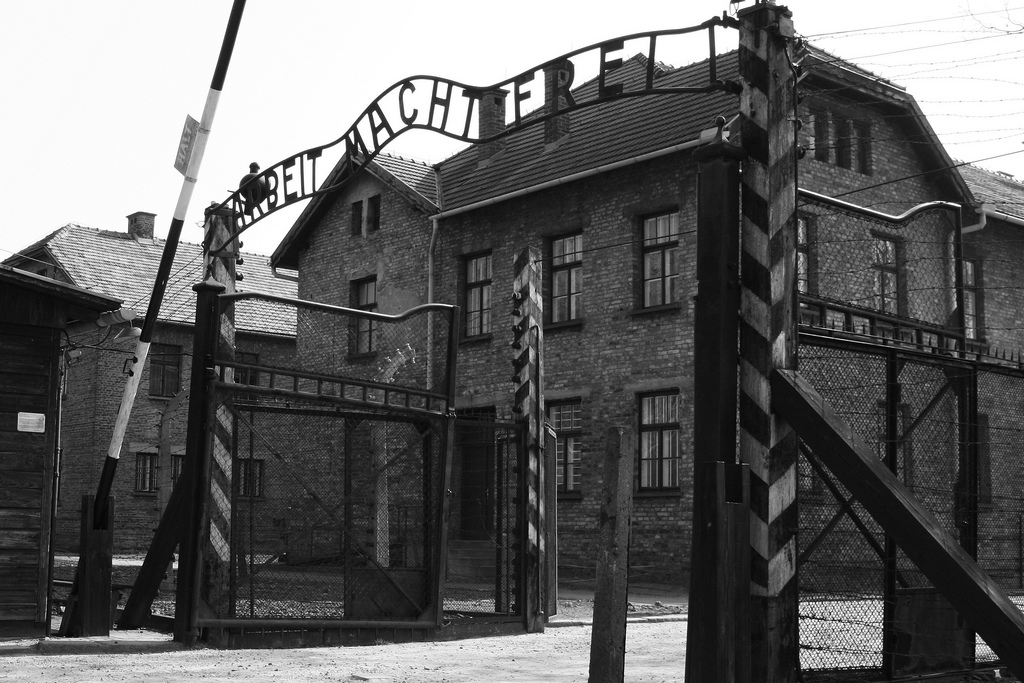 Time’s Arrow leaves one reeling in an ethical no man’s land. On the surface its divisive mix of banal, scatological humour and harrowing images of the suffering at Auschwitz give an impression of grandiose irreverence. Indeed, many have condemned Amis for his exploitation of the Holocaust and the lucrative – yet grotesquely voyeuristic – interest it evoked. However, rather than renouncing the novel as the experimental product of Amis’ seemingly limitless ambition and arrogance, the reader must delve beneath the ostentatiously provocative surface and surrender himself to the swirling flux of the novel’s enigmatic progress. If he has the stomach for it, there is much to recommend the reader to Amis’ controversial offering; the novel provides a new and insightful perspective on the Nazi mentality. The author constructs a dystopian dimension in which body and soul are divided, time runs backwards and individual identity is an abandoned concept. As Amis painfully illustrates, it is only in this fictional dimension that the Nazi ideology can be comprehended as “logical”. This grotesquely funny novel is not, therefore, devoid of moral purpose. But beware … the passage to enlightenment is neither calm nor straightforward!

Time’s Arrow depicts the life of Tod Friendly, a Nazi doctor who works closely at Auschwitz with Josef Mengele, the notorious SS physician who carried out disturbing and inhumane experiments on camp inmates. Though this may seem to be a typical Holocaust narrative, the text is elevated from the mundane by Amis’ literary flourish; Time’s Arrow is narrated backwards by the protagonist’s alienated and impotent soul. The novel begins with the doctor’s death, and proceeds to hurtle from a sense of monstrous foreboding to the revelation of a dreadful secret, culminating in a return to the whitewashed innocence of childhood. The narrative spins from rural America to urban New York, on from Europe to the Vatican and Auschwitz, pausing at intervals to provide a bemused commentary on the apparently ludicrous behaviour of the “human beings” as they go about their backwards lives. Further confusion in the eddying chaos of Tod’s reversed existence lies in the constant adoption of different pseudonyms and identities at each new location.

Amis is scrupulous in his application of the reversed chronology. Dialogue appears non-sequential, whilst the spirited narrator is quick to point out the great pains he must undertake to translate the “pitiable chirruping” of “affable, melting-pot, primary-colour, You’re-okay-I’m-okay America” from the nonsensical (“Aid u too y’rrah”) to the intelligible (“how are you today?”). In the early stages of the novel the temporal inversion constructs a farcical world of limited sense and simple hilarity: the government spread rubbish on the streets to be collected by litterers, men who hailed taxi cabs now salute them goodbye. Sustenance issues from the toilet, ingested through various orifices, whilst humans slaver and retch to fill their glasses and plates in the restaurants and bars which have become “drool parlours” and “fancy vomitoriums”. Mechanics go about “the long chore of patient wreckage”, whilst doctors no longer heal, but rather wound their patients (an advance warning of the horror to follow).

The humorous resonance of these banal absurdities is obvious, yet the reader is in for a shock as what begins as an ingenious yet trivial stylistic trope acquires darker connotations in the context of Auschwitz’s topsy-turvy morality. The jovial opening account of an inverted everyday existence proves to be a backdrop to the far more sinister implications of a dark world in which to kill and to heal are one; the world of applied biology. At Auschwitz Amis explores the Nazis’ mission to “dream a race”; to cut out the gangrenous Jewish appendix from mankind and to eradicate life not worthy of living. Nazi doctors are thereby invested with a godlike power – in exterminating a race they are healing a nation. Whilst the rest of the novel depicts the resultant absurdities of a temporal and therefore logical inversion, Nazi ideology is already backwards and therefore acquires an unsettling kind of sense. Creation and destruction become confused in a virtual enactment of the Phoenix Myth. The Jewish race is conjured from the heavens, born in a literal baptism of fire and restored to vitality by the use of a poisonous gas. They become the ungrateful benefactors of gold teeth and jewellery from the guards who clothe them and are united with family members by the “matchmakers” of the selection ramps. The sequential mechanics of Birkenau are in “perfect harmony with the engine of nature”.

The playful outrage of Tod’s soul at his lack of control over his corporeal actions – “guess what. Tod has started fooling around. Yeah. With Gaynor.” – here transmutes into something much worse. The protagonist is reunited with his physical self, being “one now, fused with a preternatural purpose”, but committed to a phoney enterprise. The success he talks of is the successful implementation of Nazi ideology. He expresses discontent at the ingratitude of the Jews and the inelegance of the operation, thus producing a sense of horror in the reader. This is matched only by the realisation that the utopian activities depicted at Auschwitz are in fact an exact portrait of the Nazi mentality; the creation of a supreme race that is pure and enduring. Like the novel’s narrator, this race, though mortal, will be “unkillable”. He will be the incarnation of Nietzsche’s “Übermensch”.

For some this is a step too far. But is Time’s Arrow really a shameless and inappropriate literary experiment? The formal opportunities offered by the reverse chronology are fully and successfully exploited, though potentially at the expense of the necessary respect for the subject matter. Nevertheless, if the reader is willing to accept this the “trash and shit” of the opening phase of the novel acquires metaphorical significance. Amis’ reader is lulled into a sense of gentle calm as he floats on the surface of the novel, acclimatising himself to its stylistic reversal – but not without a lurking suspicion of the horrors concealed in the depths. Then comes a tidal wave of perception, forcing the reader to submerge himself in the gushing ethical chaos of Auschwitz as Amis reveals a truth that is “wrong in time”.