Review: Mo Said She Was Quirky

Jeanloup Pranchere in Literature on 22 August, 2012. 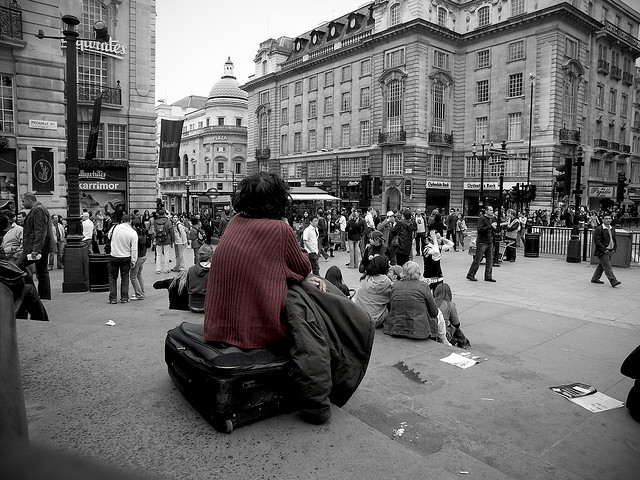 A world away in London.

Challenging and rewarding, is an exceptional novel by one of the best Scottish writers today.

Helen is a Glaswegian woman who now lives in London, working nightshifts as a croupier in a casino. One morning, as she goes home from work in a taxi with her colleagues, she sees two homeless men cross the road. The scene is surprisingly tense as a sense of threat arises from the slow progression of the men, one of them having a limp. Both Helen and Danny, the usually bold taxi driver, sense how uncanny the situation is. This seemingly random and insignificant encounter is at the core of the “plot” of the novel, as Helen is convinced she knows one of the men: “Brian, it was Brian, her brother Brian. How could it be but it was, it was his movements and his shape my God Brian, it was Brian.”

There is always a certain reluctance when trying to apply the notion of “plot” to any of James Kelman’s novels, the action tending to be often internalised rather than external. Mo Said She Was Quirky is no exception, and it could be argued that it takes the process one step further. Concretely, this means that readers solely interested in the development of an external plot can read the first three pages and the last three pages of the book if they hope to find an answer to the question that runs throughout the whole text: was it actually Brian?

The rest of the book is devoted to Helen’s inner thoughts and existential worrying as she goes home, tries to get some sleep, talks to Sophie, her 6 year old daughter or Mo, her Pakistani boyfriend who works as a waiter in a restaurant, before she eventually goes back to work the following evening. I do not want to suggest here that the book is tedious in any way, but readers should be warned that Mo Said She Was Quirky certainly cannot be described as an entertaining read. It is a tense and almost exhausting book. The narrative is draining in the way it painstakingly renders every single random thought that crosses Helen’s mind. Not that the novel is particularly long or laborious, as it is rather a fascinating narrative, but the reader is really made to feel the sense of being imprisoned in the character’s head, of having no way out of these unstoppable ramblings about families, racism, sexism, Scottishness, and so on. The rhythm is best understood by first-hand experience of the text, when Helen can’t stop thinking of her encounter with the homeless man:

“It might have been him and it might not have been him. It was like watching a taped movie and you get interrupted by somebody and miss something important, so you have to rewind. Helen had to rewind. No she didnt. The whole day long my God rewinding, what else had she been doing? Replaying and replaying, replaying or rewinding, doing both.”

And so Helen spends her day “replaying and rewinding” her life; switching between a present situation that does not seem to offer any possibilities, sharing a bedsit with Mo and her daughter who has to sleep in a cupboard due to the size of the place, and a past that keeps haunting her; memories of her dead father, unloving mother and abusive ex.

This claustrophobic/paranoid stream of consciousness is not unusual for Kelman, indeed it is one of his trademarks, but it is probably the first time he pushes it to such an intense level, turning the text into an extremely dense and suffocating intrinsic monologue. For this reason mainly, Mo Said She Was Quirky might not be the best starting point for readers who are not familiar with the author’s style. Not an easy read, it remains an extremely rewarding one as the novel translates perfectly the inner turmoil of Helen’s daily routine. Her story is both unusual and typical within Kelman’s literary canon. It is the first time he has experimented with a female voice in a novel (something he had done a couple of times in his short fiction, see for example the excellent “A Sunday Evening” in Greyhound for Breakfast), it is also the first time that any form of so-called “bad language” is almost completely absent from his typical fiction (as opposed to the experimental and difficult Translated Accounts, that marked a radical stylistic departure from the rest of his works). Helen herself is also quite different to the sometimes angry and usually excluded characters Kelman employs. But she does share with them some characteristics that define a typical Kelman character; a certain naivety, a concern for others and a similar tendency towards self-imprisonment. Likewise, Scotland and what it means (or does not mean) to be Scottish bear a certain importance in the text, although maybe less so than in his previous novels.

The only moments that interrupt the constant flow of consciousness are the conversations she has with Mo and Sophie, made rare due to their respective work shifts and the girl’s school hours. These interactions come as breathing spaces within the main narrative, genuine moments of relief when both Helen and the reader can appreciate what lacks in her life and in the book: simple human contact. Not only are these passages enjoyable as they introduce breaks into the narrative flow, they also show that Kelman is able to render more than the complexity and randomness of the human mind. The dialogues involving Sophie are especially impressive in this respect; Kelman has managed to produce, in words and in attitude, a perfectly plausible 6-year-old girl.

If different content-wise and perhaps more difficult than some previous novels, the voice and technique displayed here are identifiable from the very first lines as Kelman doing what he does best; putting down on paper the inner world of a working-class individual, and turning the seemingly mundane and uneventful into an internalised contemporary tragedy of the British underdog.