Review: ‘How to Be a Woman’ by Caitlin Moran 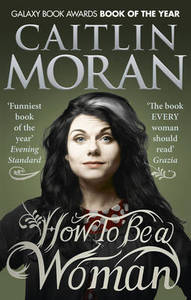 “Is this what feminism means today?”

When I first set eyes on Caitlin Moran’s novel ‘How to Be a Woman’ I noticed two things. Firstly, that the title presumes to tell me how to ‘be’ based solely on the fact that I am a woman and, secondly, that the woman on the front cover has unkempt hair, wears doc marten boots, stands with a masculine gait, wears minimal make-up and is dressed in ill-fitting clothes; in short, she represents (at least to me) the clichéd ‘feminist’ stereotype.

The blurb reads, ‘Caitlin Moran rewrites The Female Eunuch from a bar stool and demands to know why pants are getting smaller’. I think ‘written from a bar stool’ is an accurate description of this book… Moran’s style of writing is colloquial and informal at best; she uses text speak like ‘tbh’, disregards rules of grammar and punctuation such as the use of the full stop, and her language is perpetually hyperbolic. Moran uses brackets and capital letters to interject angry messages on every page. She raises her voice in a way that screams ‘LISTEN TO ME, I AM A FEMINIST AND I WANT TO BE HEARD’. Oh God!

Now, Caitlin Moran is infamous for her dry sense of humour, but sometimes she does push the boundaries. In a desperate effort to be funny Moran tries to fit her ‘Marmite’ humour into practically every sentence; it invades even the most sober of topics, and consequently makes light of them. One example is where she compares the machine in her abortion surgery to a Dust Buster… Do we actually find that funny?

A vast portion of ‘How to Be a Woman’ is dedicated to clothes and accessories; bras, small knickers, high heels and handbags. Moran rants continuously about how bras hurt, and how she dislikes small knickers, and how she can’t walk in heels. How very 1980s of her. I would suggest burning her bra, but I am fairly sure that’s already been done. Women are not forced to be fashion slaves; a lot of women choose to dress well and fashion can be extremely liberating for them. Professional women love spending their money on clothes and shoes. Yes, that’s right, professional, well educated, emancipated women. While men may spend their money on flashy cars and gadgets, we tend to, but don’t always, spend our own on clothes. Maybe I am only speaking for myself, but from a very young age I enjoyed dressing up, while my brother enjoyed playing with toy cars. Was this indoctrination by the media or a natural inclination?

Moran posits that women embrace fashion to please the male gender. Okay, but then why do men feel they need to work out and dress well? It couldn’t possibly be because women like well-dressed, ‘buff’ men, could it? It couldn’t be anything to do with the fact that women go gaga over a strapping man in an expensive suit. It cannot be denied that both genders can be superficial; women may have the physical pain of wearing heels (should they choose to) but they also judge men on superficial qualities such as penis size, how much money they have in the bank, and how well-dressed they are.

Moran also dedicates a whole chapter to women’s anti-ageing products and plastic surgery. I would like to point out that men also have an aversion to turning grey and adding on the pounds. Speaking of weight, Moran also dedicates a vast amount of the first chapter to a preoccupation with her weight and then, only upon losing weight, decides she can be attractive to men. This hardly sends a favourable message to her ‘feminist’ readers. Moran talks about weight exclusively as a feminine issue, and this seems rather biased. When young boys are fat, they get ridiculed just as much, if not more, than girls. Even in adult life having a weight problem can be debilitating for both genders can’t it? I know plenty of women who would not be attracted to an overweight man. It works both ways!

Certainly, Moran’s overwhelming focus on the effects of unisex issues on women alone seems to unfairly belittle the corresponding problems of men. I would never accuse Moran of being a man-hater, but I believe that she makes a number of assertions that would offend the average male reader:

I object to this statement; the idea that only women are changed by parenthood is ludicrous. In this day and age, parenthood is a joint effort. Yes, of course, men cannot breast feed, and they don’t go through the pain of childbirth, but to belittle the role of the father in rearing a child shows only ignorance. As for career-orientated women giving up their job, it is only an option; one which many women decide to take but which many also don’t. If they do, very often, it is because they want to spend time with their children. This is the twenty-first century and many men actually expect their wives to get back into the work-place, not look after the baby and bake cakes all day!

My final point is on the issue of ‘feminism’ itself. One of the reasons why men yawn when you mention feminism is not because they are sexist, or because they don’t want equality, but because ‘feminism’ often takes the form of a long, self-indulged rant; something that Caitlin Moran is guilty of in this book. ‘How to Be a Woman’ is not ‘The Female Eunuch’, and this is certainly not ‘The Second Sex’. Those are feminist texts that at least try to offer an objective, academic analysis; Moran makes no such attempt. This is very much her story and her view on gender inequality in a book which purports to be a feminist text and, annoyingly, contains rather frivolous definitions such as this:

So here is the quick way to see if you’re a feminist. Put your hand in your pants.

a) Do you have a vagina? and

b) Do you want to be in charge of it?

If you said ‘yes’ to both, then congratulations! You’re a feminist.

I studied feminism both at university and at school from two very passionate feminists. However, neither my professor nor my teacher were in possession of a vagina. Moran addresses feminism as though it were a uniquely feminine standpoint. She forgets that feminism was first a political movement and is, still, a belief in equality. I feel like this book does not grapple with gender inequality in modern society, but rather superficially laments ‘issues’ such as periods, hair removal, bras and high heels. Yawn. Is this what feminism means today? For a book entitled ‘How to be a woman’ it spends a significant amount of time focussing on the (arguably) negative aspects of womanhood”.