Marisa Taylor in Literature on 9 December, 2013. 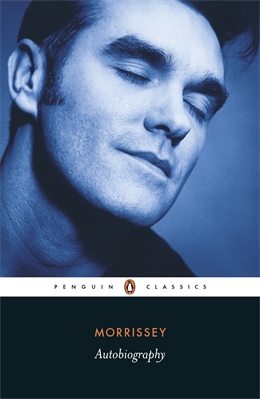 In a 1987 The South Bank Show documentary on The Smiths, Morrissey says that “I feel the Smiths create their world…The Smiths create their own environment and you can either go in or you can say ‘no I want Diana Ross instead’, and it’s your choice really.” Over 25 years – and a successful solo career – later, the sentiment behind the long-awaited Autobiography remains the same: either choose to enter, accept, and embrace Morrissey’s world or find something else to read instead. In this way, Autobiography is demanding of the reader; it never attempts to be accessible or easily digestible, and this is what makes it a refreshingly honest, utterly fascinating, and ultimately frustrating read.

On publication, Autobiography was immediately greeted with an atmosphere of hostility and disbelief, prompted by its instant status as a Penguin Classic, an esoteric accolade usually reserved for the literary greats such as Homer, Dickens, and Austen. However, whilst the critics were debating literary theory, devoted fans were starting the book they’d anticipated for over a decade, modestly beginning with “My childhood is streets upon streets upon streets upon streets”.

This promising opening begins the reader’s transportation into a vivid vision of bleak, post-industrial Manchester, where Morrissey is struggling to adapt to a world in which “the ordinary process of living takes up everyone’s time and energy”, “dodging life’s bullets is known as survival”, and school’s “negativity exhausts [him] to a permanent state of circumstantial sadness”. The mundane existence of working class Manchester is celebrated and elevated, despised and chastised, as the young Morrissey sees beauty and glamour in harshness and struggle, but simultaneously flees from anything resembling the ordinary. He doesn’t “want to live unseen, camouflaged within the crowd” and instead bravely aligns himself to society’s margins, preferring to be “acceptable to one’s own self” rather than “acceptable to others”.

In this ‘How Could Anybody Possibly Know How I Feel’ isolation, the young Morrissey lives for art, expressing obsessive enthusiasm for Lou Reed’s “half-sung melodies of menace”, the “opposite to polite and antiseptic” New York Dolls, and the poets who “can tell you everything you need to know about your own sorrow, and about the joy and sadness that is usually found side by side”. These artists all serve as reminders that “the good life is out there somewhere”, and thus Morrissey commits himself to the pursuit of his own art, determinedly deciding “I will sing, too. If not, I will have to die”. Although this penchant for the poetic and the melodramatic may seem hyperbolic to some readers, what else should be expected from the man who once, deadpan, said “I do maintain that if your hair is wrong, your entire life is wrong”?

However, in typical Morrissey style, settling old scores eventually takes precedence in the narrative. We learn that Morrissey is in constant search of perfection and is angry with those who fall short of his idealistic vision, even if that someone is his ever-striving self. As a result, the memoir is peppered with self-parody and self-deprecation, often to hilarious effect: “I bored my own self into unconsciousness every single day”.

The majority of the work is written in the present tense which often creates chronological confusion but perfectly evokes the process of remembering, in which fragments of life are fleetingly unshrouded and seemingly unrelated events blur together. The content itself is also frequently contradictory; we are told that “no teacher at St. Wilfred’s will smile” before “Miss Redmond smiles lovingly at Anne Dixon”. Morrissey seems either oblivious or indifferent to these inconsistencies, as though satisfied in the fact that his identity cannot be pinned down long enough to sustain a definite perspective. The reader is thus given the impression of the protagonist not as a fixed entity, but as a conglomeration of conflicting characters who surface with different intensities and different perspectives accordingly: the man who looks forward to the funeral of the “irritating” Julie Burchill is the same person who pities humanity for being “cursed by the sadness of being”; the man who is confident enough in his talent to state “I have never had anything in my life that I did not make for myself” is also the man who continually questions his fans’ enthusiastic adoration.

Throughout Autobiography, Morrissey refuses to simplify himself into a manageable format for the reader. He revels in his own complexities and refuses to limit himself to one narrative voice. This refusal of limitation is, perhaps, the only constant aspect of his personality, and this is reflected in his refusal to organise his life into chapters or confine his prose to paragraphs or sentences of manageable length. His prose style is full of twists and (sometimes painful) contortions which work hard to resist definite assertions and to retain the possibility of multiple interpretations. Consequently, the should-be-straightforward is often blurred into intriguing vagueness and the alluring mystery which has been so central to Morrissey’s appeal is masterfully maintained in a genre, which by nature, promises revelation. However, despite its constantly changing moods and styles, the narrative is pinned together by an intellectual sharpness, wicked humour, and a constant Wildean wit: “’Do you ever get tired of singing “I, I, I, I,I,I,I,”?’ Jerry asks me. ‘I?’ is the indignant reply.”

Although the work is deeply original and unapologetically demanding, the persistent reader, who chooses to enter Morrissey’s world despite its contradictions, confusions, and complexities, is rewarded with a rare glimpse of a fascinating character who has lived life on his own terms and condensed this life into a beautifully poetic and frequently hilarious prose. Overall, Autobiography is an infuriating and instantly lovable paradox, and thus, the perfect and most revealing reflection of Morrissey himself.