Rebels and Rakes: The Past of the Byronic Hero 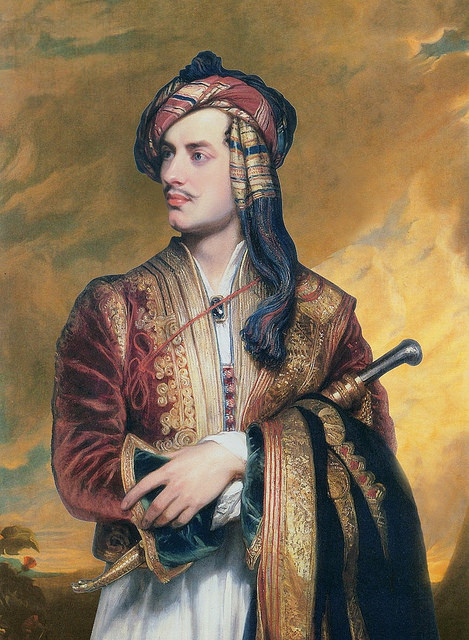 Though few people have heard of him, the Byronic hero has in fact dominated popular literature since his creation in the 19th century; indeed, he is still massively popular today. To see why, just take a look at popular literature: have you ever read Twilight? Have you watched Van Helsing? In any Romantic- or even Gothic- story, it is possible to find Byronic influences, from the look, style and behaviour of the hero to his wild and shocking lifestyle. Despite his contemporary popularity, however, the development of this elusive figure spans two centuries and stretches all the way back to the famous Romantic poets of the early 1800s- and in particular, perhaps unsurprisingly, Byron himself.

George Gordon, Lord Byron, was no stranger to notoriety during his lifetime. Described by Lady Caroline Lamb (who later went mad thanks to his rejection of her) as ‘mad, bad and dangerous to know’, Byron’s reputation as a skilled poet was equalled only by his infamy in high London society. At university he was said to have kept a bear as a pet, frequently ran up huge debts due to his flamboyant lifestyle and after he left his huge number of affairs caused multiple scandals, reaching a low point in 1816 when rumours of his affair with his half-sister Augusta Leigh forced him to leave England for good. Ten years later, his early, tragic death in Greece only added to the myth that had by this time sprung up around him. Byron actively encouraged this myth, inventing himself through his poetry as a tortured, sensitive artist who was haunted by his past misdeeds, as a ‘fallen angel’ figure; indeed, he himself was the prototype for the tortured nature of the Byronic hero, which helped to cement his status as one of the most memorable figures of the entire Romantic era.

Byron adapted this self-image for use in his poetry, most notably in his first major poem The Corsair. Released in 1814, it caused a sensation, not only for the frankly staggering amount of rhymed verse that Byron had managed to conjure up, but also for its setting, story and above all its protagonist, Conrad. Subtlety was not Byron’s forte: Conrad was portrayed as a pirate king whose secret love affair with Medora was hidden by a cold and fierce exterior. His reverence and respect for women, contrasted with the ‘laughing devil in his sneer’, drew the template for the Byronic hero and added a glamour to his actions- after all, who can fail to be seduced by the idea of a lovable rogue, especially one whose love for women is contrasted with his apparent love of killing? Byron perfected the notion in his later works- Manfred, Lara and even Don Juan with a mysterious, glamorous and above all tortured hero whose often-tragic death at the end of the story would, perhaps aptly, come to mirror that of Byron’s himself.

Over the years this sense of glamour surrounding the figure has only grown stronger. The Byronic hero has made appearances in everything from blockbuster films (try X-Men) to weighty tomes like Jane Eyre. The Brontë sisters’ depictions of characters like Rochester and Heathcliff developed the figure even further, creating a man defined by his love for the heroine and pushing the limits of what was acceptable in literature- as well as testing the audience to see how far he could be seen as redeemable in the face of extreme violence, taken perhaps to its epitome with Oscar Wilde’s Gothic extravaganza The Portrait of Dorian Gray. The hero’s tortured, dark past and his potential for redemption, often at the hands of the woman he loves, are the two key aspects that have enthralled audiences for centuries, even making an appearance in (yes) Twilight, where Edward Cullen’s tortured battle with himself closely links back to Byron’s depiction of pain and anguish.

Despite the Byronic hero’s long and sometimes unsavoury history in the annals of literature, making his appearance in everything from romance novels to absolute classics, it is impossible to deny how popular he is. Byron’s masterpiece lay in creating a figure that could keep an audience guessing, whose tormented past elicited curiosity and sympathy, and whose eventual redemption implied that anybody could find happiness. Despite its continual development over the years, from villainous to morally ambiguous to heroic, it seems a firm fact that this particular literary construct will be keeping people enthralled for years to come as well.