Kate Hutchings in Literature on 8 December, 2010. 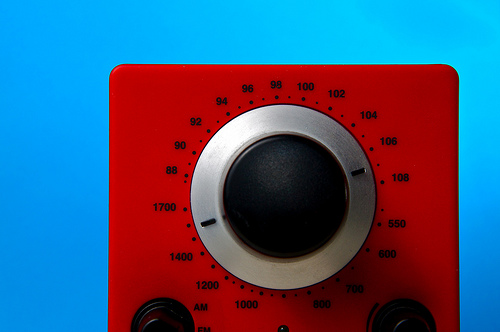 “[Today] radio may seem like a technology whose time has come and gone. At best, many view radio affectionately, like a lingering great aunt, now pushed to the periphery […]: once a dominant force in the world’s media life but now ‘the forgotten medium’, no longer as glamorous or important as its shinier successors.” These lines written by Edward Pease and Everette Dennis sum up the response I seemed to get from everyone last year when I said to them: “My dissertation? Oh it’s on radio drama…” Most people seemed quite interested, but would follow up those interested noises with lines such as “Isn’t radio drama old?” and ever since, I’ve been battling against this perception that radio is a literary medium exclusively for the old and blind.

Certainly, radio as a whole is not so much in the public eye as visual media (no pun intended). No one stands around the coffee machine saying “No, I didn’t watch X Factor, but did you listen to ‘Just a Minute’ or ‘The Archers’ yesterday?” But, believe it or not, the absence of Cheryl Cole from radio doesn’t make it any less worthy of tuning in to. In fact – cue the drum roll here – radio can be highly entertaining and a lot less brain-dead than much television, yet it also has its fun and low-brow moments.

Indeed, since attaching myself to a 24/7 drip-feed of Radio 4 eighteen months ago, I now know about innumerable objects from the British Museum and the cultures and histories behind them (thanks to “A History of the World in 100 Objects”); I can get a daily dose of film, book, music, performance and visual art chat and interviews via “Front Row”; I can finally understand some of the boggling things scientists talk about through the fun and irreverent “Infinite Monkey Cage”. And, believe it or not, when you start listening to “Gardener’s Question Time” you suddenly do genuinely want to know what is killing Edith’s rhododendrons… OK, well that may just be me. In all seriousness, for all you literature buffs out there – how is your Sunday afternoon complete without “Open Book” and “Poetry Please”?!

It really is like getting lost in another world: listening to a piece of radio literature is incredibly immersive. When you watch a TV programme, a film or a play you are made very aware that you are at a distance viewing a detached piece of drama. Radio literature is much more like getting sucked into a book. Indeed, and I’m sure some people will argue with me on this, but I find that radio literature can do a better job than the book in terms of making you feel swept off into another realm. When I listen to a piece of radio literature I don’t have to hold a book and keep readjusting my position to get comfortable, I can settle down, shut my eyes and forget my immediate environment.

I don’t seem to be the only one that feels absorbed by radio literature: Robert McLeish once went as far as to say that radio drama isn’t really an aural medium at all because it is instead multi-sensory. He claimed that in his mind radio drama was “aromatic and tactile” as much as aural or, indeed, mentally visual. On another note, McLeish points to a further important point: he states that one great advantage of radio literature over print is the “sound of the human voice – the warmth, the compassion, the pain and the laughter.” Radio literature is very much alive and vibrates with human emotion. Not, that I dislike printed literature – I think that’s an important thing to clarify here. But I do think a lot of people believe that that is the only thing out there.

So now you’ve had a taste of what it’s like to listen to a piece of radio literature and a sample of what’s out there to listen to. I can feel you all stretching out for the knobs of good old FM radios as I speak… but of course, you don’t even have to have a radio to listen to this literature: you can livestream online, download podcasts or use iPlayer. And, unlike so many other media, it is all free: so, no need for a TV licence.

Being free and being so versatile, radio literature is also able to be bang up to the minute. And that is one of its main advantages as a literary medium. BBC Radio Drama’s vision now is to move listening beyond the static “at home” experience to a roaming and fluid one which keeps pace with our busy lives. Their goal is to make free audio plays available for download anywhere at any time on internet enabled phones. And even better, these plays will be written to allow you to interact with your immediate environment and follow characters in the same geographical place as you: so you might download a drama set in the Tudor court which you can follow through the gardens of Hampton court, or you might download a Viking saga to listen to whilst wandering the streets of York: the potential for combinations of plays and locations is endless.

What I personally find very exciting is that the very first of these kinds of in situ plays is currently available to download and listen to on location in Gateshead and will still be available until the end of December. It is called “Take Me to the Bridge” and was written by Sean O’Brien, the only poet to ever win the Forward Award more than once. I tried out the experience a few weeks ago and genuinely feel it is a beautiful piece of writing which works fantastically with its environment. So if this article has given you a thirst for radio literature it might be worth you taking the ten minute journey up to Newcastle now the trains are running again to give this new kind of drama a try. The piece only lasts 18 minutes so it won’t take up much of your day, yet it allows you to play a part in something very new and fantastically creative. If you’d like to find out more about the experience and show your support then do join the Facebook event detailed below, and if you do go along and try it then don’t forget to leave feedback on the event (which is checked regularly by the BBC for any comments) because without feedback and support BBC Radio Drama might not fulfil their vision of opening this up across the country: your comments really can make a difference. And finally, of course, your support will help me in my cause to show that radio literature is no longer a forgotten dinosaur but is in fact a living medium which involves and listens to young people and challenges what we consider literature to be.