Katie Ashmore-Marsh in Literature on 11 December, 2017. 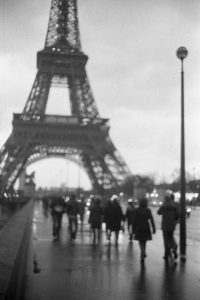 ‘a haunted traveller in a world of phantoms’ image source: Flickr

Baudelaire wrote his ‘Tableaux Parisiens’ within Les Fleurs de Mal during Haussmann’s modernisation of Paris, and the poems consider twenty-four hours spent within the capital. However, these are not the ponderings of a decadent flâneur enjoying the new cityscape created for the bourgeoisie but rather ‘a haunted traveller in a world of phantoms, an ailing prophet roaming through the cosmopolis-inferno’[1]. The city itself is presented as a transitory and unfixed landscape throughout. We see a description of the city in ‘Parisian Dreams’ of ‘shifting wonders’ which ‘no mortal ever saw’ and where the ‘irregular vegetation’ of nature has been replaced by ‘water, marble, and metal’. This almost aggressive rejection of the Romantic idyll of nature introduces us to a city that seems to reject what is human and what is natural. Indeed, Brombert states that it seems that Baudelaire feels that ‘it is evil… not good, which is done naturally’[2].

Furthermore, Haussmann’s Belle Époque Paris was a city literally divided upon class – the quarters for lower class residents and women situated outside of this newly polished centre. Indeed, the interactions that these upper-class men had with the lower classes would have been only seeing them in places where they worked for them. Notably, lower-class women often did not earn enough money within their jobs in the service and entertainment industry (be that bar work or dancing in the opera) to support themselves, and many would subsidise their work by engaging in prostitution. We see Baudelaire’s narrator seem to accept that ‘suffering and vice, disease and love, death and eroticism constitute inescapable couples’[3]. Indeed, in ‘To an Auburn-Haired Beggar-Maid’ we see our narrator tell the beggar-woman that she should be a prostitute in order to raise better funds than begging. We see that her poverty co-exists with her sexuality: ‘whose dress through its tears and holes / reveals your poverty / and your beauty’. The repeated direct address here brings a sense of inescapable lecherous intent from the narrator who, through the conjunction, connects her ‘poverty’ and ‘beauty’. It seems that Gilson is correct in her assertion that Baudelaire seems to use female figures ‘to serve the ends of his art’[4].

We see Degas, painting in a similar time period as Baudelaire was writing, similarly note the connection between Belle Époque culture and prostitution. For example, in L’Etiole, we note the dismembered body of a gentleman waiting behind the curtains whilst a ballerina takes her final bow – an acknowledgement that female ballerinas would often prostitute themselves after their shows to enable them to add to their income. That the man’s head is out of view reflects perhaps the anonymous and business-like nature of these bourgeoisie men soliciting prostitutes but also serves to make this shadowy figure, waiting in the wings, much more sinister. Furthermore, the disfigured perspective of the canvas, with no clear vanishing point and the background seeming to turn into a blur of visual brushstrokes emphasises the art object for what it is: paint on canvas. This could perhaps be a condemnation upon modern life in the era, flat and soulless, placing art solely as artifice. However, it is notable that although he seems to contend with the degradation of lower-class women in society, like Baudelaire, there is not an overt condemnation of this practice. The ballerina in practice remains sexualised: we are forced to be a member of the voyeuristic audience looking down upon her, weighing up her worth, and complicit in the practice going on. Moreover, her body is sexualised, with her flesh given a glowing nubile sense through the use of chiaroscuro absent within the rest of the image, and through Degas’s technique of mixed media, layering pastel and oil together to create a very tactile picture surface. Both Degas and Baudelaire seem to reveal a Paris that is full of inequality and danger, especially for lower-class women, but neither condemn it.