Yasser Nasser in Literature on 4 November, 2013. 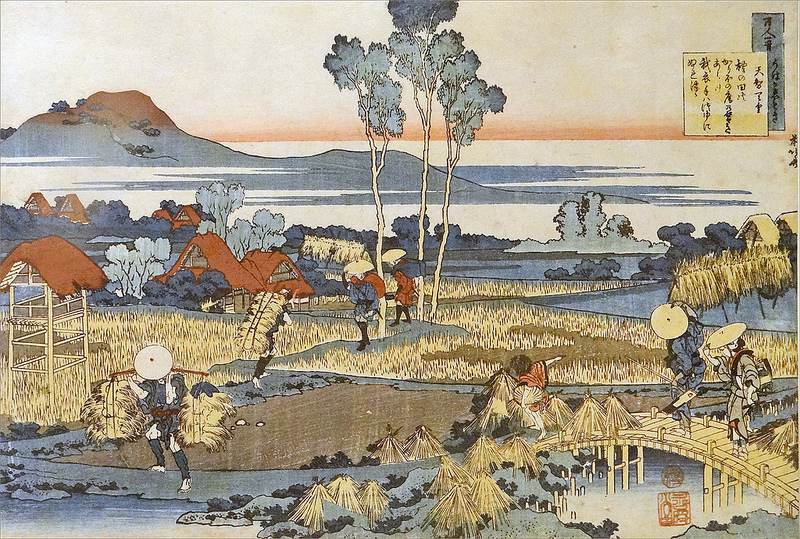 Literature from other cultures can be enthralling, argues our contributor.

Literature is something that all cultures can appreciate on some level or another. In the West, we have a rich catalogue of impressive works and authors, to all of whom we give credit where credit is due (for the most part). However, the fact remains that this tradition of impressive, wildly influential literature extends past cultural boundaries as well; there is much to be learned by reading works from different parts of the world. It allows you to experience a facet of a foreign culture in a way that many people would never get the chance to experience – you are, in a sense, completely immersed in a place and time that is different in ways you could never imagine.

It is a shame, then, that there are some legendary works out there that some of us will often just completely ignore, simply because we have no idea as to what they entail. East Asian literature, in particular, can often seem rather daunting, simply because there’s so much of it; moreover, some of the most renowned works of the region, such as Romance of the Three Kingdoms, are so thick that they put people off immediately. However, there are probably easier places to start.

Ugetsu Monogatari is perhaps one of the best examples I can give of a work that encompasses much of the qualities – both good and bad – that East Asian literature often features. It is a rather short work, being little more than a compendium of nine fables, but it is excellent nonetheless. When you read it, you truly feel as though you have been transported to another, more interesting world; isn’t that all we could ever want from a good book?

Ugetsu Monogatari was written by Ueda Akinari, one of Japan’s foremost authors in the 18th century. The book is generally considered his masterpiece, and is one of the most influential works in all of Japan, having helped to shape the country’s culture and mythos; “Ugetsu” is also a movie by the legendary Kenji Mizoguchi, following the plot of one of the book’s stories, and is widely considered one of Japan’s most celebrated films.

As mentioned above, Ugetsu Monogatari is a collection of nine fables, all written featuring different characters in different time periods; most elements of these stories can be traced back to various Japanese myths and legends as well as certain supernatural tales from China. The name of the book itself literally means Tales of Rain and Moon; in China, rainy nights are associated with supernatural happenings. 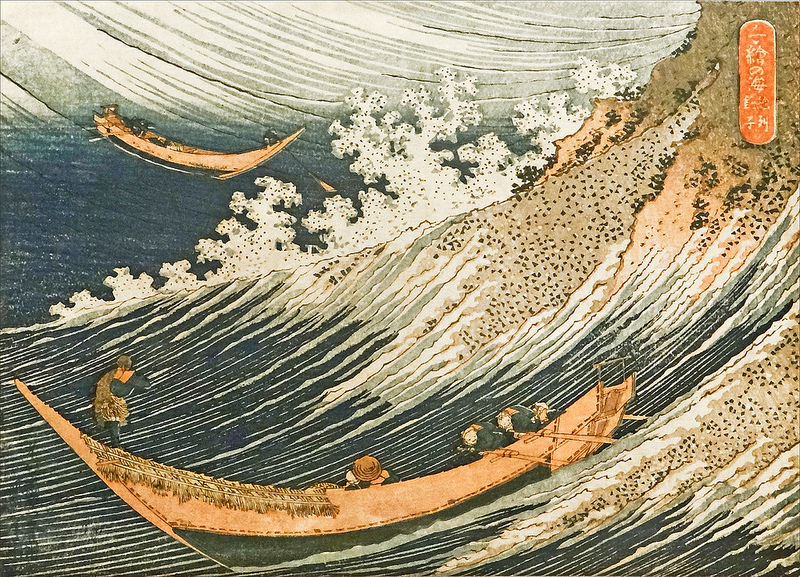 Weather and the supernatural are significant in Japanese literature.

Indeed, most of the stories in Ugetsu Monogatari weave together supernatural elements and worldly affairs in a rather seamless matter. Just like the Greeks, the Chinese and Japanese in particular have never had much issue in using fantastical features in their stories to try and tackle difficult societal issues. That is exactly what the Ugetsu Monogatari does.

This review won’t focus on the content of most of the stories – one wouldn’t really be able to do the book much justice that way – but instead it will simply focus on a rather brief analysis of Ueda’s writing style and the techniques he uses to make his storytelling so compelling. Moreover, there is one fable within the book that I found particularly compelling and interesting and so, as something of a taste of what Ugetsu Monogatari really has to offer, I will address its narrative and theme.

Considering that, obviously, the original Ugetsu Monogatari was written in Japanese, it is rather hard to directly analyze Ueda’s writing style. Multiple translations of his work have appeared throughout the years – my personal favorite would probably be Anthony H. Chambers’. Though he frontloads the book with an ungodly amount of expositional background and history, his translation keeps it simple and tries be as true to the original source as it can be. With that in mind, the style that Ugetsu Monogatari employs in its various stories is very easy to immerse oneself in. As with most works from this period, the stories employ the use of an omniscient narrator; although this style has recently fallen out of vogue – rather undeservedly at that – it serves the fables quite well here. Having a story told through the eyes of a ‘floating’ narrator who observes every scene can be very immersive – it really makes you feel as though you are actually there, watching scenes play out. Moreover, it really adds a strange, mystical element to many of the fables, giving the reader a sense that they are being told an old-wives’ tale by a wandering bard.

With most of the fables that Ueda presents us, there is an excellent blend of Japanese history and mythology. Nearly every single one of the nine fables in the book has a historical context behind it that helps shape the story; furthermore, the supernatural elements that Ueda throws in are considered part of Japanese folklore as opposed to something that he conceived of himself, creating a definite authentic feel. Admittedly, some general background to Japanese history is probably necessary to fully appreciate every reference Ueda uses, but thankfully Chambers’ translation serves to assist readers in that aspect. 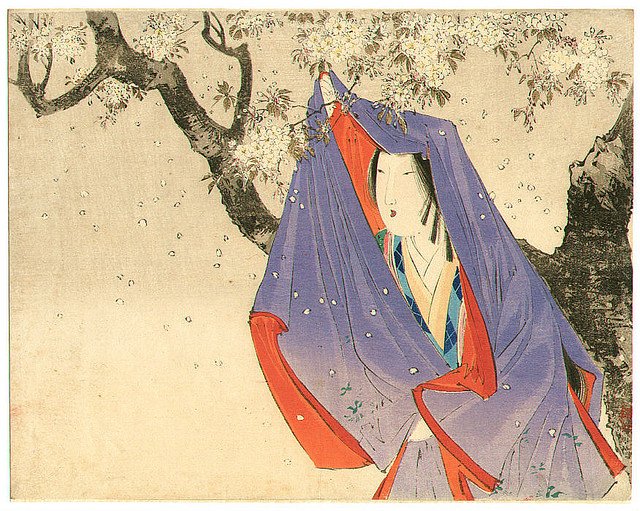 Miyagi receives a promise from her husband that he will return.

Perhaps unlike something like Aesop’s Fables, the stories that Ueda relates are not quite so cut-and-dry. The themes that each story tries to convey can often be quite dark and not particularly transparent; that just makes it all the more fun to read, though. For example, in the third fable, Asaji ga Yado (The Reed-Choked House), we are presented with the tale of the disgruntled farmer Katsushirou and his wife Miyagi, taking place in 1455. Katsushirou decides to leave for the capital, seeking better fortunes, much to the dismay of his wife. He promises her, however: “I shall return this autumn, when the arrowroot leaf turns over in the wind. Be confident and wait for me.” Miyagi places her faith in him and he sets off.

Violence breaks out in Katsushirou’s home province during some political turmoil, based on an actual historical scenario, and the road back home is blocked off. Thinking Miyagi to be dead, – when in reality she refuses to leave, having faith that Katsushirou will return to her – Katsushirou stays with his in-laws for seven years. He grows a little anxious and finally returns home, only to find Miyagi still alive, albeit unnaturally aged. He goes to bed with her, but in the morning she is gone, leaving only a note behind:

“Nevertheless, I thought, and so deceived

I have lived on until today!”

Coming to terms with Miyagi’s suffering, Katsushirou finds out from an elderly neighbor that she waited for him for five years, before succumbing to an illness. He travels with the old man to a temple, praying to the Buddha all night to give Miyagi’s bitter spirit some peace. The story ends with the old man telling Katsushirou about a beautiful woman named Tegona, who had killed herself out of desperation to escape dozens of accosting suitors. It all finishes on a rather somber note, with Katsushirou putting together a teary couplet:

“Tegona of Mama, in the distance past –

This much they must have longed for her, Tegona of Mama.”

Though the story seems rather straightforward, there is a surreal depth to it that carries it to new heights. It must be understood that in medieval Japanese society, and in many ways modern Japanese society as well, that a promise is an exceptionally powerful thing; an oath is binding in ways that overcomes even death. Moreover, in a way, the entire story is about the ephemeral nature of life itself, and how, in a sense, it is part of the natural order – the retaking of the village by nature is significant in this respect. Practically all of the fables in Ugetsu Monogatari are just as thought-provoking.

It is understandable that this sort of book wouldn’t be for anyone, what with its rather archaic style of storytelling, but at the very least it can be said that Ugetsu Monogatari will be an enjoyable read. If it doesn’t successfully capture your imagination, then it is doubtful that anything will.