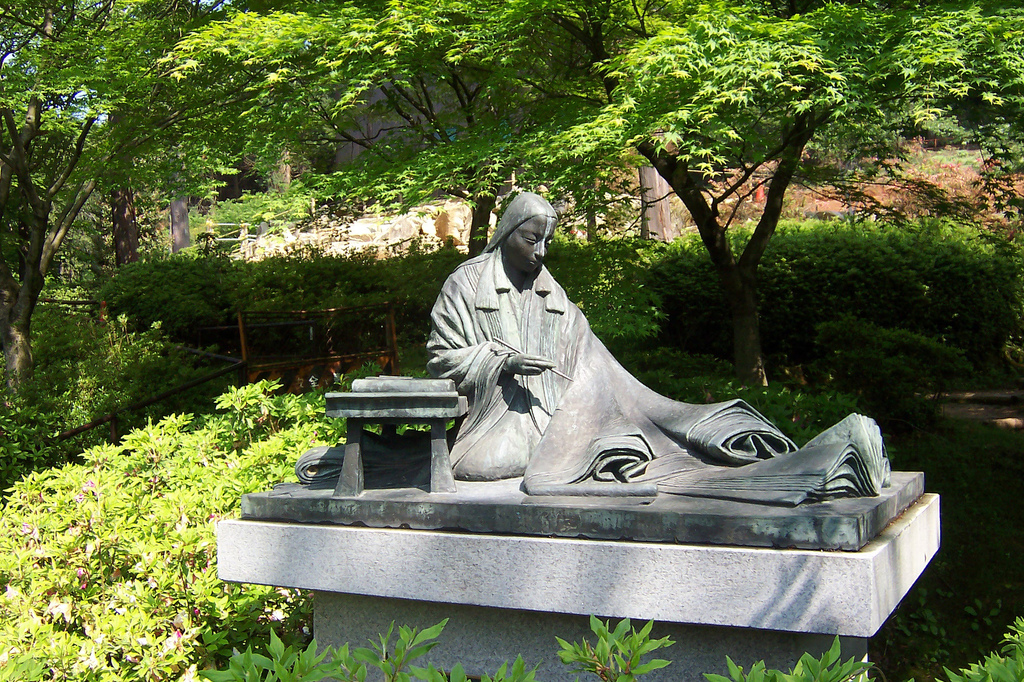 A statue of Lady Murasaki, author of The Tale of Genji.

As discussed last time, just as we have an impressive collection of influential works and authors in the West, the cultures of East Asia do as well. We previously looked at Ugetsu Monogatari as a prime example of Japanese literature, highlighting supernatural elements of Japanese and East Asian culture that are still significant today. This time, I would like to introduce the reader to yet another monumental work of Japanese literature – The Tale of Genji.

The Tale of Genji is perhaps a little more well-known outside of Asia than the Ugestu Monogatari, but I suspect that this has little to do with people actually reading the book; it is famous for being known as the world’s first novel. What historians generally mean by this is that it is perhaps the first work of prose fiction with enough complexity, coherence and unity in theme to actually make it a ‘novel’. Of course, this is all rather subjective, but at the very least it does serve to introduce The Tale of Genji as a work that is seen as not only important but also very good.

And good it is. Unlike Ugetsu Monogatari, this is a single piece of work with a plot that spans years, following the same character throughout the course of his life – Genji (you guessed it!). Genji is in many ways unlike any protagonist I’ve ever come across; he is a character that you can both sympathize with profusely and despise with a passion. More than just that, though, he is a real, rounded character with weaknesses and strengths that are constantly explored and challenged.

Before I go into the book’s plot, it would be worth mentioning a little background first. The Tale of Genji was written sometime in the 11th century by a woman named Lady Murasaki, in the Heian period of Japanese history. This is a period that is always celebrated for its emphasis on high art and is generally regarded as the peak of the Japanese imperial court – after the Heian era, the Emperor became more and more irrelevant, with militaristic shoguns gaining prominence. This was a time of peace and culturally flourishing, and certainly that becomes very evident when you read the book.

The Tale of Genji is set in the same period, in Kyoto itself. Lady Murasaki, as her honorific would denote, was a noblewoman herself, though little else is actually known of her; regardless, she would have had some insight as to the life of the Japanese court and it is no doubt that the world around her was an influence in creating such a rich piece of work. The Tale of Genji shines precisely because it transports the reader to 11th century Japan, allowing you to perhaps envision what life in the Imperial Court must have been like, with power-relations and scandalous affairs constantly on your mind.

In terms of the actual writing style, what is often praised about Murasaki’s prose is that her writing seems very organic. Having read the translated version by Edward G. Seidensticker – often regarded as the translation that is most true to the original text without compromising any readability – I would certainly have to agree. Murasaki, like many writers from the period, used the third-person omniscient perspective, allowing the reader to have insight into the minds of all of her characters, keeping up with their emotions and thoughts; this really allows for significant psychological analysis. This is what I meant by saying that Genji is a rounded character – you are exposed to the way that he thinks and his passionate mindset through Murasaki’s honest, natural prose that simply paints the picture in a very clear and concise way. There is little purple prose to be found here, and it never seems like Murasaki allows her novel to be saturated by overly descriptive wording; a rather common fault in other works from the period.

I’m rather loathe to actually delve into The Tale of Genji’s plot too much, nor do I think an in-depth analysis of the novel’s themes would actually be entirely helpful; at the very least, though, a small synopsis might help whet your appetites. The issue is that the novel is in many ways a very personal one – it is a book that concerns itself almost entirely with the matter of youthful love and just how sporadic and devastating it can be. Murasaki clearly wanted to explore what she thought was a very interesting part of court-life in the period: the way that personal relationships fluctuate in relation to one’s status. However, and this is where the issues really arise, that is just my interpretation – many literary historians have looked at the novel and have tried to assess just what themes it does and does not try to confront. This is really a book that you have to read in-depth to fully enjoy and appreciate.

With that disclaimer out of the way, onto the plot. The book consists of fifty-four chapters, and is generally dived into three parts: the story of Genji’s early life and success, his later years and nostalgia. For the sake of spoilers, I won’t actually mention what the third part of the story deals with – that is up to you to find out.

The Tale of Genji is just that – a tale involving all of Genji’s life. It follows him from his birth and childhood through his rather vivacious adolescence and young adulthood all the way to his somber older years. Throughout his entire life, Genji involves himself with various different women – the book itself is in many ways an account of his affairs and their consequences. As he grows older, he becomes more and more remorseful, with his love-life slowly disintegrating even as his political career is on the rise. Genji never really gets everything he wants – he wants to have a powerful position in court, but also create a stable relationship that provides him with the affection that he feels he deserves. This dilemma forms the basis for most of the plot’s impetus. In many ways, The Tale of Genji is a tale of Genji’s constant instability, discontent and the tragedies that occur around him as a result of all of that.

I cannot say that this is a very happy book. Indeed, if there is any criticism to be leveled at the work it is that it does not balance out the rather emotionally heavy content with more light-hearted content. But, I suppose that is really the point; Genji’s life, from its very beginning, is tragic in more ways than one, but that has more to do with the choices he makes than anything else.

None of this really does the novel the justice it deserves, though. However, I do hope that your interest is at least slightly piqued, and that, at the very least, through The Tale of Genji it has been displayed just how deep and complex the literary works of East Asia can often be.