‘I, Too’: marginalised American identities in poetry (part one)

Katie Ashmore-Marsh in Literature on 17 February, 2019.

History and narrative are intricately knotted together: narrative is ‘essential to the business of historical explanation’[1]as it allows us to ‘fill in the gaps and provide a smooth flow of change’ in a history where there are otherwise ‘radical discontinuities’[2]. Although history contains multiple presumably contradictory narratives, modern appreciations show there is usually a major narrative told: ‘the phrase “master” or “meta” narrative has grown popular for describing stories which seem to assimilate different cultures into a single course of history dominated by the West’[3]. 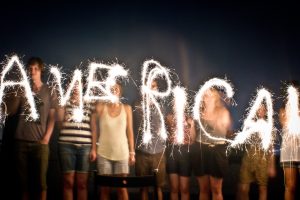 This essay considers three poets who are often removed  from the “master” narrative of America. The three poets and poems considered will be Langston Hughes’s I, Too, Allen Ginsberg’s America, and Joy Harjo’s An American Sunrise. These consider perspectives outside of what most would consider the “master-narrative” of history in America: queer people (Hughes and Ginsberg), African-American people (Hughes) and Native American people (Harjo). All three authors sing celebrations of their own histories whilst remaining indebted somewhat to the “master-narrative”. Yet all also seem to conclude that they will go on to forge different futures free from this hidden “labyrinth”.

All of these poets have conflicted relationships with the “master-narrative” of America, but seem to emphasise some connection to the country.

Ginsberg begins by talking to America as if it is a separate entity ‘America I’ve given you all and now I’m nothing’[4]and is full of bitter criticism ‘America when will you be angelic?… when will you be worthy of your million Trotskyites?’[5]. The repeated rhetorical question and parallelism makes this a criticism ‘sounding like a State of the Nation address’[6]though we know that this comes from a single citizen, bringing attention to the irony that America is not a sentient being that can answer but is rather ‘a collection of weighty and singular opinions bearing down on the persona’[7]. Ginsberg’s critique still shows connection to America and after this questioning he still identifies with America in an ‘oddly personal’[8]way: ‘it occurs to me that I am America / I am talking to myself again’[9]. This is not ‘Ginsberg’s confession of his true Americanness’[10]due to the emphasis on the individual with repetition of the first-person pronoun. Rather, this connection alludes to Hughes’s earlier I, Too, showing a counter-cultural American identity. Ginsberg removes the adverb ‘too’ perhaps as he is a white man and therefore more accepted within the “master-narrative” of America. He seems already within this “master-narrative” through the use of the present tense when identifying as America where Hughes talks in terms of the future. Yet we see that though he identifies with and even personifies himself as America, this is fractured through the allusion to Hughes.

Hughes also has a complicated connection to America, not through his own critique but the prejudice of the “master-narrative”. Like Ginsberg, Hughes has a fractured narrative voice. This manifests in a psychological duality as the poem ‘seems to be at war with itself’[11]. In response to his marginalisation, the narrator is capable of a ‘laugh’[12]but also an aggressive future tense assurance that he will ‘grow strong’[13]and ‘nobody’ll dare’[14]to continue to separate him. These simultaneous statements connect to the concept Du Bois has of “double consciousness” in African-Americans, a result of ‘two warring ideals in one body’[15], being at once technically an equal member of society yet subject to discrimination like segregation. This aggression from one’s own country explains the ‘too’ in ‘I, too, am America’[16], but the shift from the opening “singing” America indicates that Hughes is, like Ginsberg, unable to celebrate this “master-narrative”[17]. However, Hughes uses synechedoche to speak on a personal level for the African-American community whilst Ginsberg is able to remain deeply personal. Both are critical of relating to America, both conclude that they are a part of the country, even if marginalised, though Hughes speaks for an entire marginalised community and Ginsberg personally.

Harjo also takes Hughes’s ‘I, too, am America’[18]and transforms it: ‘we are still America’[19]. Like Hughes, Harjo seems to speak for a group (Native Americans), but unlike him, she uses the collective rather than synechdoche, adding a sense of multitude to the threat that this is an America that they are ‘ready to strike’[20]. By using ‘still’ America, Harjo introduces a contradiction not within the speaker themselves but with past and present. We know the narrator has already ‘ran out to meet’[21]themselves, a personification of the mentally divided individual Hughes and Ginsberg present, but unlike them showing resolution to this inner conflict. The conflict lies with the “master-narrative” of America forgetting its past, illustrated in the statement that ‘we / were the heathens, but needed to be saved from them’[22]. Here the paradox shows the contradictions of the “master-narrative” which would show history being rightfully taken from Native American “heathens” when we know they need to be ‘saved’, and moreover this Christian imagery is introduced as being ‘invented’[23]calling the whole binary notion of ‘heathens’ and ‘saved’ into question as well as the presumably also ‘invented’ “master-narrative”. The separation implied between ‘we’ and ‘them’ creates a closed sense of an America that Harjo identifies with: it is not forcing oneself into a collective (Hughes) or recognising that one is part of the collective history (Ginsberg) but rather a re-writing and re-claiming of history stemming from the “labyrinths”. 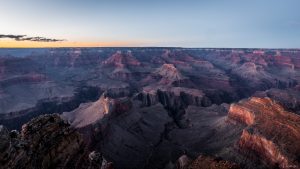 [17]And unlike Whitman, whose poem I Hear America Singing is referenced here