Halloween Special: The Gothic Tradition on our Doorstep

Justina Crabtree in Literature on 2 November, 2011. 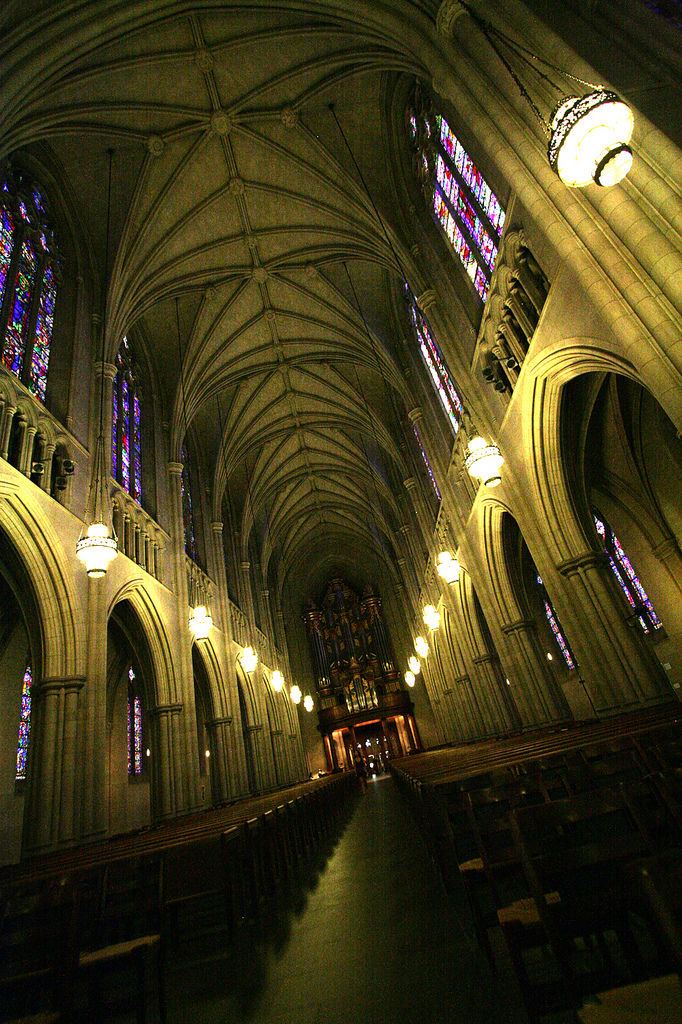 The pointed arch – a key characteristic of Gothic architecture

The deep chill of the afternoon effortlessly penetrates through to one’s very bones, whilst the gloomy, clouded sky threatens rain. A group of strangers meet in a Medieval hall, shields of bygone families adorning the walls and dark beams pressing down upon them. No, this is not the beginning of a hashed attempt at Gothic fiction in under 1000 words. Sunday 23rd October marked the last day of the Durham Book Festival, a month long celebration of literature both old and new, including a vast array of lectures and readings. As a part of this literary fete, I had the pleasure of attending a guided walking tour of Durham, the mission statement of which was to “apply the word “gothic” to Durham”. We were led on a trail to various points of interest around the city which particularly relate to the Gothic tradition, culminating in what John Ruskin termed the “8th wonder of the world”, Durham Cathedral.

The meaning of the term “Gothic” has altered over time, originally referring to an architectural style beginning in the Medieval period, many examples of which can be found in Durham (aspects of the cathedral being prime examples of this). The most prevalent feature of Gothic detailing is the pointed arch, constructed in order to point the viewer’s eyes up towards heaven. This new style jarred with the ideals of classical architecture still popular during the medieval period, chiefly designed to convey balance, symmetry and elegance. This discordance mirrored a historical event that had occurred many centuries before, as a barbaric German tribe – the “Goths” – invaded Rome in the early 5th century, destroying all traces of the classical culture they encountered there. The term “gothic” was adopted a second time in the 19th century, this time with regards to developments in literature. Prior to this period, literary works had seen a classical revival; texts being filled with allusions to Greek and Roman myths, predominately restrained and didactic in tone. Key purveyors of this now deemed “neo-classicism” include Milton, Pope and Defoe. However, in 1764, Horace Walpole shocked many with what is largely considered to be the first Gothic novel, The Castle of Otranto, involving death, prophecies and mystical knights. As Gothic architecture was intended to create feelings of wonderment, mystery and helplessness in those entering the buildings, Gothic fiction was so deemed as it evoked a similar effect in its reader.

One particular area of Durham drawn to our attention by the tour guide was Grey Tower, situated in Wharton Park just outside of the main city centre. The building gained infamy during the Victorian period and children would run past for fear of a supposed ghostly presence. Sightings of the “Lady of Grey Tower” date back to the 1880s, where several witnesses claim to have seen the deathly pale face of a woman staring down at them from the window of one of the highest rooms. Though details are subject to speculation, a young woman may have been murdered on the steps of this location. Local legend has it that the doorstep forever remained wet after the killing, even in the best of weather. In the 19th century, this impressive building housed Isabella Varley Banks, a Mancunian writer of Gothic fiction. She is viewed by many literary critics as the successor of Ann Radcliff, author of The Mysteries of Udolpho. Often publishing under the name of “Mrs George Linnaeus Banks”, she confessed to choosing the tower due to a morbid fascination with ghosts, the supernatural and generally spooky things, noting its “uncanny reputation as a haunted dwelling”. Grey Tower became the setting of two pieces by Banks, her novel The Waif of Wearside, and the shorter tale Stung to the Quick.

Moving closer into the centre of Durham, the tour brought us to Divinity House, a building just behind Palace Green. It was here that John Meade Faulker resided, appointed Honorary Reader in Palaeography – the study of writing – at Durham University in 1921. Faulker is author of the little known Gothic novel The Lost Stradivarius, which explores the idea of evil being manifested in an object (as opposed to a human being). Faulker writes of a wealthy Oxford student discovering an ancient violin, and through his playing becoming obsessed with a particular piece of music which appears to summon the ghost of the instrument’s previous owner. The story is set both in England and the Continent, developing the themes of moral corruption, love and macabre fixation.

This year, the Durham Book Festival has seen the launch of a new novel, The Possessions of Doctor Forrest by Richard T Kelly. The tale describes the ensuing series of mysterious events after the protagonist goes missing one summer evening. David Peace, another contemporary writer, deems Kelly to be “drag[ing] the gothic novel kicking and screaming into this new century replete with its own horrors and demons”. Having been led around Durham’s beautiful Gothic wonders, the inclusion of this text as the festival’s featured book seems an entirely appropriate choice, with the ideas of mystery and horror perfectly highlighted by the city’s darkly beautiful architecture. Though being a prevalent literary tradition for over two centuries, Gothic literature has continued to fascinate readers, remaining undeniably exciting and relevant today. And the reason for this timelessness? “Gothic” draws to attention the unknown: things we have no control over or simply cannot explain. These concepts have forever remained elusive to the hard-working human consciousness that constantly seeks answers. Writers like Banks and Faulkner relished the sensation evoked by Durham’s Gothic architecture. Through writing, they exercise their compulsion to share it with others and thus spread the uneasy – yet addictive – feeling of disorientation.