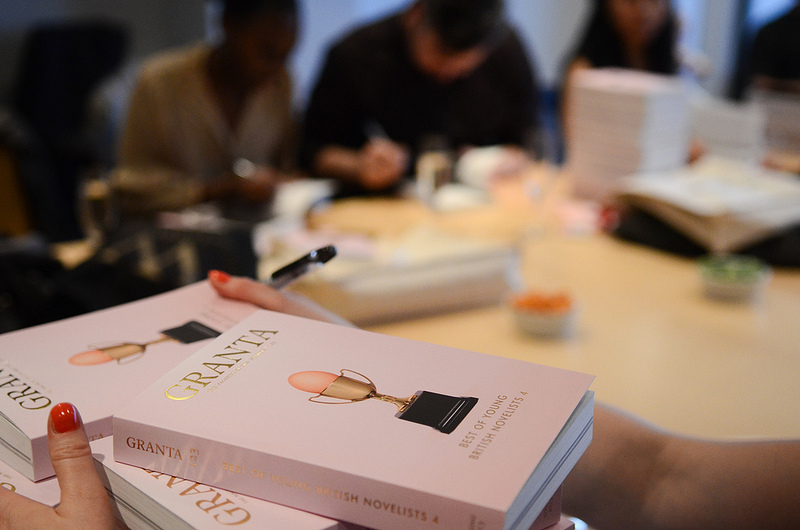 Halfway through Granta’s anthology of work from its chosen twenty “best of young British novelists” writing today, is a photo-shoot in the tradition of the ‘photo essays’ that usually divide issues of the magazine. Nadav Kander’s shoot is dark and atmospheric, with each author photographed individually in a grey room at a table where a candle continuously burns down to a smouldering blob of wax in the last photo. Of course, with a setting like this, the shoot does edge onto the pretentious side at times. But then, this is inevitable in a collection celebrating elite literary novelists. Indeed, embracing it was definitely the best option.

Perhaps unfairly, the photos alternate between one and two page spreads for different authors. Some props such as books, a hip flask and a baby are used and someone has evidently had a lot of fun with a blur effect on some of the photos. On the whole this produces few iconic images, but no particularly bad ones either. Helen Oyeyemi, Tahmima Anam, Naomi Alderman and Ross Raisin stand out in the more memorable images, which you can imagine being used again in their career, yet the others are a little forgettable. Unfortunately, and surprisingly, there is no group shot like the one given for press releases, which is a notable omission.

Then again, the photo shoot is really only a bonus to the main content of the writing, although, in a less meaningful sense, it does provide a useful reference for putting names to faces in a collection designed to show the best novelists of the generation. Ross Raisin’s ‘Submersion’ is a good piece among many good pieces; made all the better, and more satisfying, for being one of the few short stories in the collection among many novel extracts. It tells the story of two brothers searching for their father, who was lost after a village flooding. Raisin’s writing uses a blend of first and second person narration which, while always used with sufficient skill as to not weigh the narrative down, never feels entirely necessary. Never, that is, until the end, when its cumulative effect pays off to give the most powerful of all the endings in the collection, and also, as it happens, ends the collection itself.

‘Submersion’ is also one of the few stories set in Britain, albeit not explicitly. Such a setting is in the minority in the collection. Adam Foulds gives a fantastically British piece of fiction in ‘A World Intact’, an excerpt from his upcoming novel, which follows an upper class soldier about to join World War Two. The dialogue has that unique quality of creating a voice intrinsic to the speech with lines such as ‘what are you leaping into the breach for? Damnfool question. And I have a pounding headache. Christ.’ However, ‘A World Intact’ is commendable as more than a historical time capsule; it is also a powerful example of fine and evocative writing.

Jenni Fagan also sets her piece in Britain, specifically a bus on the M4, in ‘Zephyrs’. Her style is far from the measured poetry of Foulds, but is none the worse for it. In one of the most postmodern pieces her writing reads like a more coherent William Burroughs, portraying the pressure of dour sordidness in an explosion of voices: ‘he tuts more – he might as well stand up and roar TUT MOTHER****** TUT–TUT ****ING TUT!’ The effect is overwhelming and exhilarating.

One of the most compelling, and distinctly British pieces, however, is Sunjeez Sahota’s ‘Arrivals’. This piece is set in the world of immigrant workers in Manchester, seen through the eyes of the protagonist Randeep. Here, more than any other writer in the collection, Sahota creates a fully realised world and way of life in the short space the authors are allocated. One of ‘Arrival’s most distinctly British and powerful elements is its use of understatement. Admittedly, Randeep’s conditions are not as bleak as those of the labourers in Anam’s Dubai-set piece, but nonetheless, life consists of little more than large working hours for small pay. The lack of melodrama makes the narrative especially poignant and very believable. People simply have to get on with life. Small hopes are often crushed, such as Randeep’s tentatively placed suitcase outside the flat he has acquired for his newly arrived wife, just in case she invites him to stay and their marriage for citizenship becomes something more. And yet, life must go on, and work still has to be done the next day.

However, many of the stories are definitively American. In ‘You Don’t Have to Live Like This’, Benjamin Markovits takes us through an American student’s college years, and it is easy to mistake it for a piece of American coming of age fiction. While it is impossible to define a clear, shared, trait among writers of a nation (and attempts to do so can quickly grow ridiculous) there is still a feel to some fiction that seems to place it as being either British or American. Markovits could easily pass undetected in a list of American fiction.

Helen Oyeyemi too shows American influences proudly, bringing New Orleans to life in ‘Boy, Snow, Bird’. Although Britain is present in the piece in the bookstore-owning and out of place Mrs Fletcher, the distinct ‘Americanism’ in the collection is evident. This is not to say that there is any complaint to be made here; when the writing is this good the setting seems perfect whatever the author’s choice. But it is worth noting, particularly in a collection aiming to showcase the best of British writers.

Zadie Smith provides another crossing point in the river of Anglo-American writing, setting ‘Just Right’, an excerpt from an upcoming novella, in her adopted home of New York. Smith is a veteran of the list, having appeared in the previous one a decade ago, and is probably the most well-known writer. Having already established her literary career, in ‘Just Right’ she proves why she should still be here, expertly taking us into the world of a small boy with timeless concerns of children such as his overbearing mother: ‘these conversations, much dreaded, always left Donovan with a free-floating sensation of guilt, all the less manageable for the indeterminacy of its source.’ The biggest drawback of the piece is again the unfortunate but probably necessary format of excerpts. A slice is never enough; the reader can’t help but want the whole thing.

Martin Amis showed his mettle in the very first list of best young British novelists with an excerpt from Money, a novel that literally jumped back and forth between America and Britain and their influences. Now, forty years later, America seems to be dominating Britain’s writers. But perhaps this is too simplistic. After all, the nationalities, settings, and influences in this collection range globally and represent the diversity of a modern cosmopolitan Britain. Indeed, the list’s diversity has received much praise, and rightly so, as there is no doubt that each writer included is of such superior quality as to clearly belong there. A lack of cohesion amongst them may just be the price for this diversity, yet it is hard not to miss that sense of a collected generation, rather than just a collection of writers.

These are ‘unreaderly times’ as Freeman declares, and has been proved by Granta’s own recent implosion, with Freeman’s own and all major staff’s resignation after pressure from the owner over the magazine’s failure to turn a profit. These are frighteningly new times as well. Whether this list proves as accurate at identifying the writers of the future only time will tell, but if this list shows that things have changed, it also shows that there will always be fantastic writers, regardless.