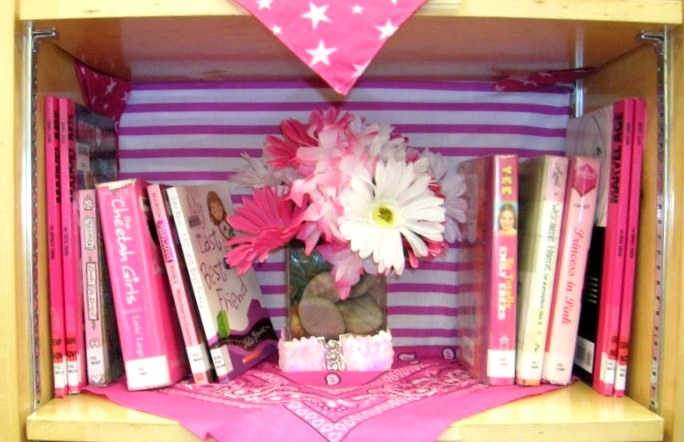 Is this the bookshelf of a self-respecting, ‘serious’ literature lover?

When we had just left school, a friend and I went inter-railing around Europe. Being young and slightly pretentious we chose a selection of very ‘serious’ books to take with us. For two weeks we struggled through Flaubert and various other profound, ‘thought-provoking’ works, each not quite prepared to admit to the other how torturous these books had become. Eventually, around halfway through the trip, our academic poise broke and in a pretty grimy hostel in Budapest, we lost literary self control. Amidst old copies of Lonely Planet and Hungarian versions of Mills and Boon, we found what, at the time, we saw as literary manna: sparkly jacketed, predominantly pink and hotly reviewed by Heat and Grazia magazines, by Wendy Holden was just what we needed. There are times and places for different books and if anything was learnt from the trip aside from the unfortunate effects of Ouzo, that was it.

Even now, whilst reading English at degree level and thoroughly immersed in the pages of all those books which have something VERY IMPORTANT to say, it is easy to get a distorted view of what constitutes ‘literature’. Unfortunately, chick-lit is not a module offered by the Durham University English department, although even I can admit that if you place Sophie Kinsella’s alongside something like Joyce’s Ulysses such an omission may be justified. However, this does not mean that chick-lit is entirely lacking in worth as a genre in its own right.

One of the problems that people have in admitting their fondness for novels of this particular ilk is that the term ‘chick lit’ has come to suggest a certain type of book. We all know at least one: held together by pastel covers and dramatic romantic plot line, climaxing in some sort of crisis in which main character finds herself alone having consumed 4 boxes of Krispy Kremes and a bottle of Pinot Grigio. Following this, a life changing decision leads to love, friendship and almost certainly a fairytale ending. Though this stereotype is not completely without grounds and has proved to be popular with the masses (think Bridget Jones), it is not altogether fair to deem chick-lit puerile rubbish. The damning judgements made by many readers fail to reflect not only the quality of writing, but also the diversity of subject matter within some of the texts. I say some, for there are a few for whom no defence is possible. Katie Price, I do not welcome the fruits of your labour onto my bookshelf.

Though this applies to every genre, what makes it particularly hard to differentiate between the men and the boys, or perhaps in this case the girls and the women, is that when it comes to commercial women’s fiction, novels are presented in a very similar manner. Despite the old idiom, books are judged by their covers. It comes with the territory – if you want to give yourself an air of gravitas, you hold a secondhand hardback in your hands. If you want to appear girly and fun the aesthetic of a book is even more critical, but you’d far sooner clutch a bright, cheery and happy-go-lucky glossy pink number. However, chick-lit comes out with some of the worst physical misrepresentations, often causing us to think twice before walking out the house with something we know we’ll be judged for going near. What appears at first to be a book which, quite frankly, you’d be embarrassed to get out on the tube, can actually turn out be something genuinely worth the read.

Nonetheless, writers from Nancy Mitford to Jilly Cooper have kept us entertained for generations, writing novels which are hilariously witty, often incredibly insightful and whose characters remain with us for life. F. Scott Fitzgerald once noted that part of the beauty of literature is that within it, you find something universal. In part, I think this is why books such as Bridget Jones’ Diary are so popular; aside from the great humour which permeates the work, every woman who reads it sees a little of Bridget in themselves.

If we’re very honest, these books are probably not going to change your life, neither will they make you a better person, yet on the upside they won’t leave you on the verge of some sort of existential crisis. What they do offer are lighthearted stories which address the many issues of modern womanhood in ways which enable us to laugh not only at the characters but also at ourselves. Certain novels can suddenly become appropriate during different phases in our reading lives, and I will certainly be pleased to occasionally indulge in a little chick-lit.