A Generation of Non-Readers

Everywhere we look technology is present in our day-to-day lives: people shuffle down streets as they stare intently at their phones, earphones blasting, the world securely blocked out. Couples sit across tables in cafes, browsing their social media rather than acknowledging each other. Young children stay indoors, staring into the light of a screen when the sun is shining outside and they could be making the most of it.

As a member of the generation who grew up with technology I, like many others, am sick of hearing the cynics of technology describe the world in this way.

They don’t understand that we have revolutionary new forms of entertainment and communication that the generations before us could only dream of. Because of this, we are often inclined to dismiss these cynical people, saying ‘Oh they’re just irritated because they don’t understand how to use a smartphone.’ As a generation that is highly reliant on technology, we are inclined to ignore those who criticise our lifestyle, but could there be any truth to the grumblings of the anti-technology voices we hear?

One of the most significant concerns regarding technology is the effect it has on young children who are still developing, as they become more exposed to devices such as phones and tablets. In 2014, Ofcom found that 11% of 3- to 4-year-olds have access to a tablet, but it is unclear whether this early exposure to technology can have a negative impact.

Research from the University of California, Los Angeles, compared evel and twelve year olds by having half the children spend five days without access to technology, and the other half maintain their average amount of screen-time throughout the period. The children were then tested on nonverbal emotion recognition and it was found that those who had gone without technology were better at recognising the emotions of others. The researchers suggested that it is useful for children to take a break from screen-time in favour of engaging in more face to face communication, to improve their social skills.

Along with issues surrounding face to face communication, it has been suggested that children using technology also have a reduction in time spent reading. Since reading has been connected to both educational success and emotional development in young children, a decrease in the amount children read is clearly a cause for concern. But what should the solution be? Should parents seek to remove the influence of technology within their households and force children to find their enjoyment in books, instead?

Julia Donaldson, author of The Gruffalo, agrees that technology is a distraction from reading. In 2011, when presented with the idea of an interactive eBook version of The Gruffalo, she dismissed the idea, stating ‘The publishers showed me an eBook of Alice in Wonderland […] they showed me the page where Alice’s neck gets longer. There’s a button the child can press to make the neck stretch, and I thought, well, if the child’s doing that, they are not going to be listening or reading […] they’re just going to be fiddling with this wretched button.’ 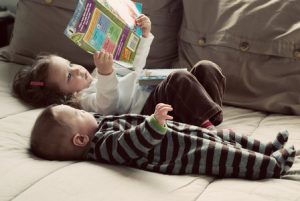 Is it the case that future generations are doomed to be illiterate because they can’t stop fiddling with wretched buttons? The significantly more optimistic National Literacy Trust would say no. In fact, these wretched buttons could be the solution to the current decline in reading. The National Literacy Trust is a charity looking to raise the literacy levels of the UK and has found, conversely, that touch-screen technology can more effectively engage children aged three to five than reading books. While those looking to undermine technology would blame this on falling reading levels, the National Literacy Trust want to use this information to promote the use of eBooks for young children. Furthermore, the combination of reading and technology has been found to bridge the gap of literacy between children from low and high income backgrounds. This is because children from low-income backgrounds will spend longer reading on a touch-screen than they will from a book. Likewise, twice as many boys as girls will spend longer reading stories on a touch-screen than they would from a book, suggesting that the gender imbalance in reading could be shifted using technology. If technology is better at maintaining the attention of children, especially the groups of children who read less, surely it can be used to encourage children to spend longer reading?
Although children may not be able to explore The Gruffalo in eBook form, many other children’s books have made the decision to branch into the digital sphere, seeking to encourage maintained reading using interactive elements. Apps like ‘Icky Mr Fox’ and ‘Even Monsters Get Sick’ present stories like any regular book, but they have the added element of interactive games that help develop the plot and simultaneously widen young readers’ vocabularies.

Technology cynics may sneer at the prospect of teaching children to read through apps and eBooks, but the National Literacy Trust suggests that adapting technology in this way is having a positive effect on the reading levels of children. In 2014, the percentage of children who read daily outside of school had risen to 41.4%, higher than it was in 2005, before the numbers began dropping – and before current engagement with technology.

Technology has faced criticism in almost every area of life, but sometimes it is worth dropping the pessimistic outlook in favour of understanding that technology can actually benefit our lives, just as it is designed to do. Children’s reading levels had been dropping long before three-year-olds had access to tablets, and if apps and eBooks are they key to re-inspiring children to read, perhaps the cynics should learn to embrace it.