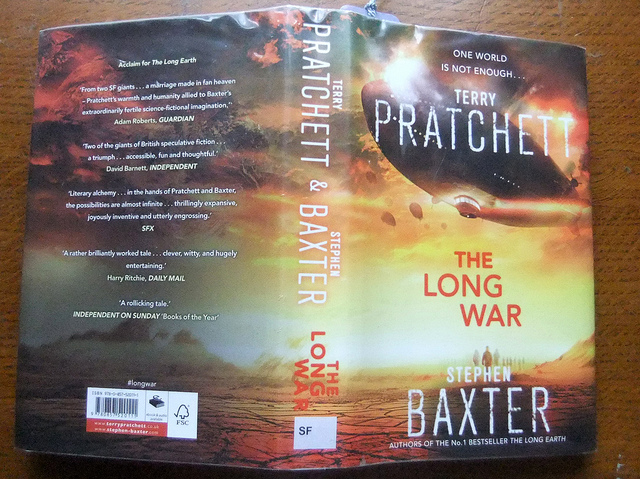 “There are worlds waiting. All it takes is one small step…”
– The Long Earth

On Saturday 12th October, highly acclaimed science-fiction writer and novelist Stephen Baxter braved the most dismal weather Durham had to offer to appear at the 2013 Durham Book Festival. The event was held in one of the upper rooms of the historic Town Hall, and this remarkable medieval setting only added to the sense of anticipation which was already building at the mere names of two literary, science fiction giants. Along with our host Professor Simon James, a senior lecturer and academic at Durham University, Baxter was here to talk about his new book, The Long War, which is the second of a series co-written with Discworld author Terry Pratchett.

Many readers might wonder why such well-established authors as Stephen Baxter and Terry Pratchett would choose to co-write a series, and the festival audience were certainly very interested to hear the background behind this intriguing collaboration. Baxter explained to us that it was in the mid 1980s that Terry Pratchett first came up with the concept behind The Long Earth, and this was the period in which his hugely successful Discworld series was just getting off the ground. It seems that upon the great success of his other works Pratchett put aside The Long Earth, and it sat dormant in the back of his mind for a period of over 25 years. Baxter referred to The Long Earth as a ‘world-building novel’, a term frequently used by science fiction critics, and it seems that it was this ‘world building’ which at first seemed of too wide a scope for Pratchett’s taste, but was of particular interest to Baxter. The two writers, already good friends, met up to discuss the possibility of co-writing a series together. Baxter animatedly described to us how he and Pratchett spent hours ‘bouncing ideas’ around and letting their imaginations run away with them. He commented that, in some ways, there was more than just the two of them contributing to the plot; the Terry Pratchett of the 80s was still very much present in the form of his original vision for the books. As one might expect with two such creative minds working in tandem, both authors had their own pet storylines and characters, and used these interwoven elements to permeate the novel with references and tributes to other stories and ideas which they admired. It is certainly worth noting that, though The Long War is a science fiction novel, it is by no means distanced from current concerns and cultural influences; Simon James comments that the books are ‘working with particular myths’, and Baxter even fondly remarks that he believes that Pratchett was inspired by popular television series Star Trek when writing about his character Maggie and her warship, the latter of which being reminiscent of the iconic sci-fi spaceship, the Enterprise.

The series, which started with The Long Earth, is set in 2015, at a time when humans have learned how to step into a parallel world; a planet identical to our own, except unpopulated by human beings. Futuristic fiction of this nature is often charged with ethical and political significance, and The Long War is no different. Many readers might think that this series presents a convenient allegory for colonisation and all its associated concerns, quite literally distanced from the bias and confusion of the modern world by the alternative time and space of science fiction. It has also been suggested that the treatment of the unevolved, humanoid beings discovered on the new world, which Pratchett unflinchingly names the ‘trolls’, may represent a kind of allegory for oppressed native peoples throughout history. Baxter freely acknowledged that neither he nor Pratchett actively discourages the link. The implications of colonisation are a key theme in the series, and The Long War even explicitly references the American war of Independence. However, this novel can by no means be confined to a single political allegory; Baxter suggested to the audience that the books reflect many different ethical approaches to the notion of the ‘new world’, drawing to mind other, troubling, notions of animal cruelty, biblically ordained anthropocentric dominance and topical ideas of sustainability and ecological responsibility.

Unsurprisingly, Baxter explained that both he and Pratchett are concerned that humanity has not husbanded its native planet very well, and are interested to know whether we would learn from our past faults in a completely new environment. This ‘what if?’ motif is something which Baxter acknowledges runs through a lot of his work, and in his writing there is a particular focus on landscape and the effect of changes in the landscape on society. One member of the audience questions this ecological theme, with reference to The Long War and Baxter’s 2008 novel Flood. It was suggested that in his books humans are portrayed as being ecologically irresponsible, even stupid. When asked if this was his honest opinion of modern society’s approach to the environment, Baxter repeated that this is something by which both he and Pratchett are concerned. However, he further remarked that, though such issues are invariably raised by books such as Flood, human culpability is not the focus; Flood is a thriller first and foremost. Baxter jokingly assures us that he is actually “relatively hopeful that we’ll muddle through, one way or another”, but from his words the audience get the feeling that Terry Pratchett perhaps takes a more pessimistic view. In fitting response to these unsettling questions, Professor Simon James refutes common sci-fi critical opinion and exclaims that “science fiction is anything but escapist!”

The Long Earth and The Long War record a tale of discovery, exploration and colonisation, themes Baxter also acknowledges to be of great personal interest. He explained how he is very interested in science, and remarked on the difference between him and Pratchett in this point. If a broad generalisation may be permitted, Baxter seemed concerned with how things change and we move on into the future, whereas Pratchett perhaps takes more pleasure in depicting what we will find where we get there. One thing which particularly struck me about Baxter’s comments was that he described The Long War as being “quite an American book”. Themes of discovery, conflict and the ethics of colonisation are deeply rooted in American literature and wider culture, and Baxter remarked that The Long War encapsulates the ‘survivalist’ attitude of the Americans; the notion of coming through hardships the stronger for having survived them. The Long Earth certainly presents a dangerous world, though a very rich one. However, one member of the audience did question why there was not more violence and danger included, as must have been tempting for two science-fiction writers faced with a ‘world-building’ blank sheet on which all sorts of terrifying, cannibalistic horrors might be painted. Baxter explains that this was simply a question of personal choice – both he and Pratchett wanted to create a “sense of wonder” with these books, and “a more utopian vision”. The world they depict is a gentle one, and though there may be danger in the background, it is not the focus.

Though I had never read any of Baxter’s work before, I came out of the talk excited to have found a new author whom I was confident I would enjoy reading. Stephen Baxter is an engaging, funny, and highly intelligent speaker, and I believe most of the audience there will have emerged all the more keen to appreciate his skill with the written word as much as they had enjoyed hearing him speak. If they are looking for a continuation of the weird and wonderful style of Discworld then Terry Pratchett fans might be disappointed, as would ardent Baxter readers; this book is the creation of two science fiction stars, and so has grown into something original and unique.

For those readers interested in pursuing more of Baxter’s works, he also has had another novel recently released, called Proximo, which is the first of two in a science fiction series.