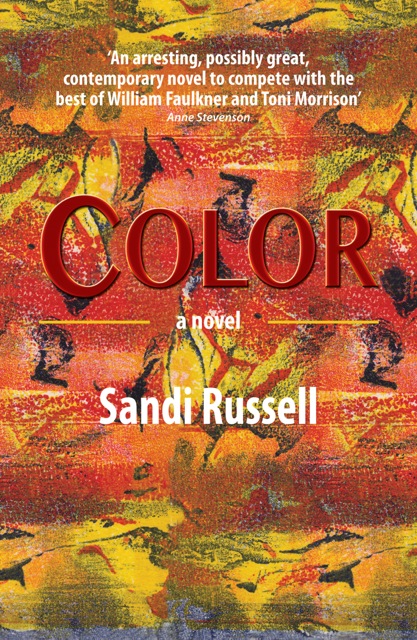 Sandi Russell “captivated” at the event with her readings from Color.

Sandi Russell – Durham resident, jazz singer, literary critic and now the author of her first novel, Color – gave an enigmatic reading at the Clayport Library at one of Durham Book Festival’s free events for the public. This naturally attracted not only those who were committed to parting with their cash for insight from a particular author, but also those who just wanted to give the book festival a go. The variety in attendees ranged from eager school and university students, an odd English lecturer or two and a few stunned individuals who perhaps came with the intention of acquiring a novel from the library and left having been captivated by Sandi.

Having spent the previous night engrossed in the novel, I was unsure how a reading could capture all of the variety and animation Sandi pours into her characters and suddenly aware that I was there to form an opinion. However as I waited eagerly, already attuned to the world Sandi creates in Color, I realised that many of the other members of the audience were to be introduced to it for the first time.

Sandi initially thanks the audience for venturing out so early on such a wet and windy Sunday morning and then launches into explaining her purpose for writing Color. She tells the attendees that she “wanted to bring together one person’s quest for identity with the inner lives of a community.” Once she begins to read the excerpts it is immediately clear just how her novel achieves this.

Charlotte is the reader’s stronghold; the voice of the present day, and like Sandi herself, fully embroiled in the world of the arts as she exhibits her work for the first time in a sleek Manhattan gallery. However, Sandi’s novel is just as sure of where it has been as well as where it is going. The setting of a simple family reunion permits Sandi all the focus needed to address the different narrative voices of the “land that spoke to her in Virginia”.

It is in these monologues that Sandi engages the audience most with her new work. Gasps can be heard across the room as she speaks as Eddie, a drug-addled individual obsessed with sex, dirt and wheels. The hope of the American Dream as a way out of a static life is more of a narcotic for him than any “crack” or “crystals”. Unlike many of her predecessors, depicting the relationship between the outward appearance of North America as we know it and African and Native American heritage, Sandi chooses to engage with the controversial in a less abstract and more real way. Toni Morrison has Beloved beg us to ‘show me your diamonds’ but Cousin Sister has merely the “fake jewelry” of the real and disillusioned.

Sandi’s inhabitation of memory provides both a background to the current day narrative as well as a convincing exposure of the difficulty of finding true identity, and for many of the women, repressing sexuality. This makes it an all the more poignant contrast at the reading when Sandi provides the audience with the animated yet innocent voices of the children, waiting eagerly to be able to eat the chicken at the dinner table. It is in her portrayal of such minor characters that Sandi succeeds not just as a writer but as a performer.

At the end of the reading Sandi signs copies of her books, and whilst many authors may undertake such a business as a mere formality and commercial enterprise, Sandi thanks each individual for coming and seems more than happy to stay around and chat. Ultimately Sandi has succeeded in her “performance”, as she called it. I left feeling I had been transported from a slightly stoic chair in the Clayport Library to the Tidewater County and dusty earth of Virginia. I might not have been able to identify with the rich culture she presents but I believed in it, and more importantly it encourages the reader to question the worn-out, battered concept of the American Dream. For Sandi Russell the American Dream is not completely dead; it just faces more challenges than ever.