DBF Review: Debate – Is Reading Good For Us?

Shalaka Darshane in Literature on 20 October, 2013. 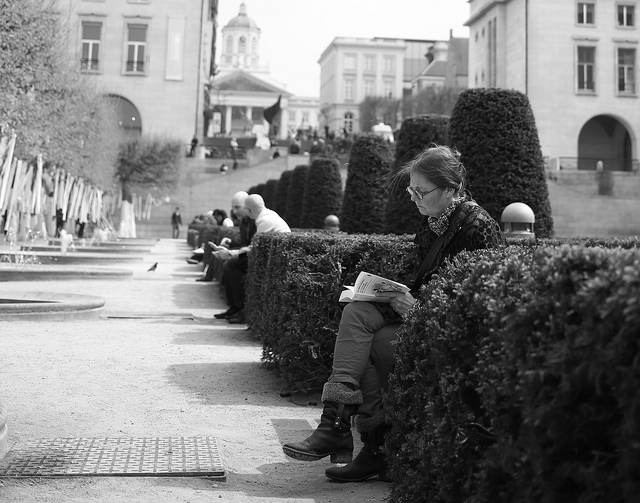 It was with an appraising glance that the sizeable audience in Durham Town Hall on Sunday October 13th welcomed three speakers for a debate on whether reading is good for us. There was a definite atmosphere of anticipation: who would dare have the audacity to argue against the question at a Book Festival in a university town?

The discussion welcomed a range of writers including Professor Philip Davies, author of Reading and the Reader, Dr Rita Carter, author of Mapping the Mind who specializes in the human brain, and Professor David Herman, author of Storytelling and the Sciences of Mind who has recently begun working in the English Studies department at Durham University. The debate was chaired by Peter Guttridge, also a novelist and journalist. With the proposal of such a controversial question to three professionals all earning money through their readership; eyebrows were raised to see how the speakers would tackle the provocative question.

First to speak was Dr Carter, who opened with a joke and reassured the audience that she would not be arguing that reading is anything but good at a literary festival as being lynched by blustering book-lovers was not high on her agenda that afternoon. She spoke lucidly about the cerebral and social benefits of reading, explaining how we are not evolutionarily trained to read so our brains must be taught to do it. She also touched on the societal benefits and the freedom that literacy generates (the idea of imagination as a form of transportation). With the mental and social advantages of reading being covered, the debate was off to a promising start but the audience were not yet satisfied: which of the two following speakers would serve as the controversial opposition to the question?

Professor Davies took a literary approach to his passionate speech about the benefits of reading, particularly for children. He spoke about how reading overcomes material disadvantages at home and how teaching children to read for pleasure and leisure improves test scores. His enthusiasm about reading in schools was not naïve though – he also pointed out the decreasing numbers of people reading for pleasure. His infectious excitement for literature came to a head when he recited The Exequy by Henry King to the audience. He concluded by affirming that reading is beneficial and proclaimed that this poem by King was a good thing to be in the world.

Perhaps if Davies’ argument was too literary, Professor Herman’s argument was too academic. Using several sources, he picked up from where Carter left of and described the evolutionary and social benefits of reading. Although keeping up with Herman’s presentation was more challenging due to the many academic sources he referenced, he was also the only speaker to scrutinise the problems that may be associated with reading. Herman raised the question of how different communities may perceive reading: he considered whether a community’s idea of reading is the same as the academic idea, and whether this gap can cause problems in society. The changing platform of literature from books to online reading also featured strongly in his argument. However, he did not consider the Internet to be detrimental to reading as it provides a new medium for communal reading and writing. Nevertheless, although raising reading-related issues, Herman, like the other speakers, also determined that it is, in fact, good for us.

So far, it seemed that the debate, although interesting, had been quite tame, so when the floor was opened to questions there were a few that obliged the speakers to think carefully. However, the most difficult question of the debate was probably the final one. An audience member asked that if the speakers put such a weight on the importance of reading, how is it okay to leave this large a responsibility on parents? Davies argued that children love reading to their parents and, similarly, love being read to. He likened reading to a gateway drug that would open children up to more things they enjoy doing. However, this seemed to be missing the point, and the audience member then used his own life as an example of a household where reading came to him a lot later because his parents did not have the experience to teach him. This was probably the most poignant moment of the whole debate, and as Carter began to form her answer on the practicality of teachers having to encourage reading in schools as well as teach, the time ran out and the debate came to an abrupt and almost disappointing end.

Although the debate seemed to end unsatisfactorily, the audience was contented after an interesting, informative and lively discussion on how reading is good for us. It was, perhaps, sensible for none of the speakers to attempt to contradict the question too much whilst facing a large group of literature enthusiasts. Furthermore, although slightly disappointing due to the drama that would have ensued, the speakers retained a legitimacy and integrity by refusing to play devil’s advocate and arguing against their own beliefs for the sake of it.