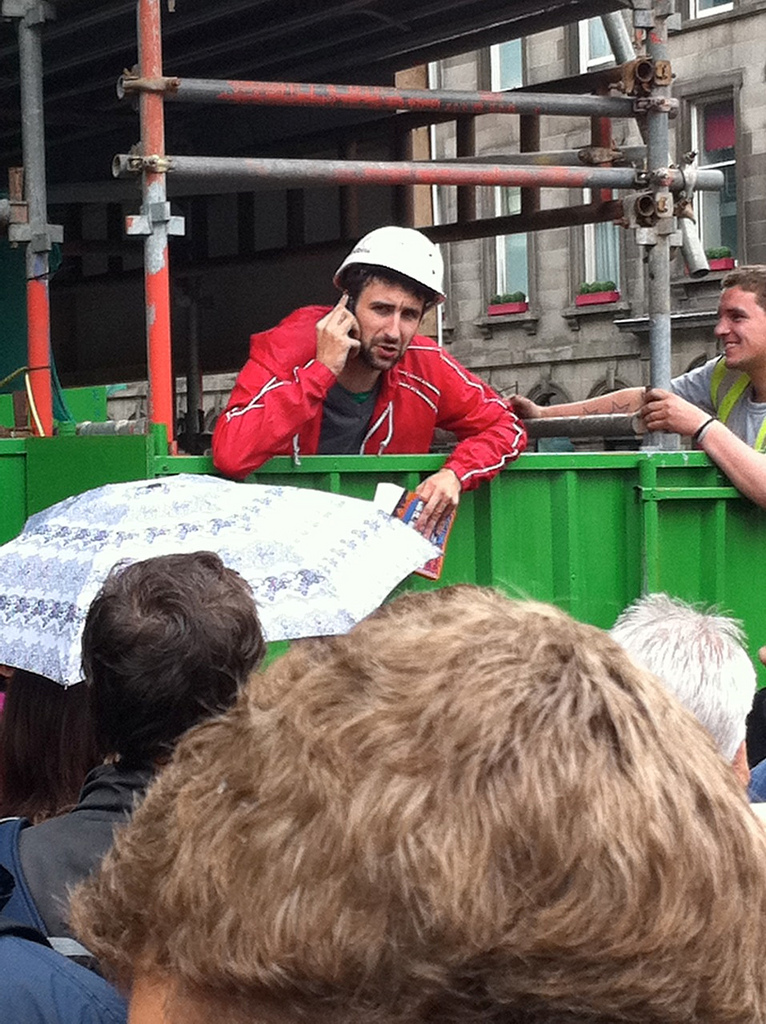 Mark Watson as author: at one of his book launches.

Many of us know of Mark Watson as that funny comedian seen on ‘Mock the Week’ or ‘Have I Got News for You’, but did you know him as an author? During his Durham Book Festival address, Mark Watson emphasised the fact that he wants to be taken seriously as an author; while his comedy is just that – comedy, he wants readers to take his books seriously, in order to see and appreciate a different side to him. Despite having followed a career in comedy, Mark had always aspired to become an author. From a young age he wrote stories of his own, starting off with titles such as ‘Mark and Dad’s Adventures’, and as an undergraduate he studied English Literature.

‘It was basically only my mum that bought my first two books’, Mark says, concerning his debut as an author. However, this new career is now developing as he is making himself known as a writer. His new book The Knot reveals the drama in the unsuspecting life of wedding photographer and underdog, Dom. Like many of his novels, it takes an unexpected twist exploring a taboo topic often not approached by authors: ‘The format of the novel allows you to explore things about being human that are difficult to do elsewhere,’ says Mark. This is one of the reasons he enjoys writing; it allows him a form of self-expression very different to performing comedy. He says his motivation for writing is the longevity of books compared to comedy shows. Books are solid and tangible, unlike a performance; writing is generally about wanting to express things that you could express no other way than through writing. It is like ‘clearing baggage from consciousness’, he says.

Mark explained how he likes to plot things quite carefully, compared to other authors who seem to let their subconscious mind develop the story and see where it takes them. Although he plots things with care, his books still don’t always turn out as planned, for example, his new book about a hotel which he is currently writing has turned out a lot more positive than he first thought: ‘There is even almost a happy ending, I was disgusted with myself,’ Mark exclaims. He went on to explain how good an experience it was for The Knot to be abridged for Radio. By listening to this new version (which he was not responsible for abridging) he was able to notice how the parts he thought were indispensable actually were not particularly important for the plotline, despite having tried to plan the plot so carefully.

The audience questioned whether he ever considered writing under a pseudonym, to which he jokingly answered that he could not as his mother would be annoyed and wouldn’t let him. However, he admitted that he has considered it, especially as he laments the fact that his name is not very unique or memorable. Nevertheless, he wanted his name to be associated with his novels and with writing, and so discarded the idea. Revealing his comedic roots, Mark then joked that he may wish to use a pseudonym for a future novel that treats content he wouldn’t necessarily attach his name to – ‘the audience would never know’, he grinned.

There was also mention of ‘the death of the book’ when Mark described the 100 online short stories he had written to accompany his novels. Normally thought of as a recent topic, Mark said he was tired of journalists writing articles on the subject every couple of years or so. ‘Books have been around for a long time,’ he says, ‘a lot longer than journalists!’ He believes the internet should be seen as opportunity rather than a threat. It has, indeed, produced a shift in the way our brains work, but Mark believes ‘one needn’t cling to old formats’.

Mark ended the night with a book sale and signing, with photographs being taken and further questions answered. ‘The Knot’ is available to purchase at most bookshops for a retail price of £12.99.