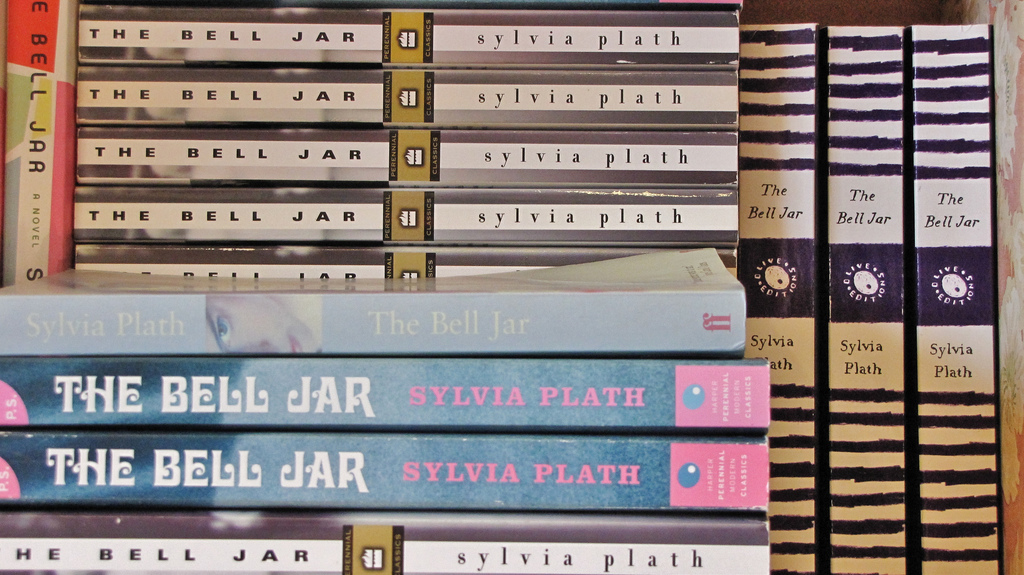 “The intense portrayal of Esther Greenwood’s fall into mental disintegration loses none of its force no matter how many times the novel is read”.

On Sunday October 13th what is sure to be an animating and intense discussion of Sylvia Plath’s only novel, The Bell Jar, will be taking place at Empty Shop HQ. This ground-breaking piece of work was published in 1963, the very year in which Plath took her own life. It is often hailed as a rite of passage novel, charting a character’s haunting descent into psychological turmoil through an utterly masterful use of imagery and symbols. It is quite easy to deduce why The Bell Jar strikes a chord with so many readers; the severely raw and distressing plight of the novel’s main character, Esther Greenwood, makes for an incredible, if not haunting read.

If one mentions Sylvia Plath and her work in a discussion then feelings of bewilderment, claustrophobia and intense sadness may enter the mind; Plath sadly suffered from depression and its poignant manifestations in her work make for challenging and upsetting reading. The Bell Jar is no different and, if possible, is fantastically more candid and uninhibited than any of Plath’s previous work. The intense portrayal of Esther Greenwood’s fall into mental disintegration loses none of its force no matter how many times the novel is read. The depression that Esther suffers originates from her belief that, no matter what she chooses in life, she will ultimately always be subservient to men. Plath also deals with the constraints placed upon women in society and the difficulties faced by those who are unable to, or who refuse to, meet these societal expectations. Esther, for example, desperately struggles with the idea of living effortlessly as both a married woman and a career woman. Plath poetically and painfully writes about these worries which deeply penetrate Esther’s increasingly damaged psyche and leave her unable to cope with her situation.

Crucially, what Plath portrays perfectly in this novel is the absolute ordinariness of her principal character. Esther is just a normal young woman finding her way in the world as she transitions into adulthood, with the story beginning as she starts a month long fashion placement in New York. Perhaps the novel resonates with so many readers because it presents a hauntingly honest truth; anyone can suffer from depression. ‘The Bell Jar’ – a metaphor in this novel for feelings of entrapment and despair – can descend upon and incarcerate anyone, even those like poor Esther who seem to be living the high life. What is more, the matter of fact way in which Esther informs us of her suicide attempts expertly reveals the extent of her depression. She begins to view her trapped, ‘bell jar’ circumstances as normal, resigning herself to feeling low and unhappy. This passive acceptance of what is ultimately destroying her, combined with Esther’s increasing vulnerability as the novel progresses, is poignant and distressing for Plath’s readers to say the least.

Through The Bell Jar Plath asks us to evaluate and perhaps reconsider our own interpretations of depression, and to what extent society should be considered accountable for instigating it. Plath’s novel beautifully exposes to readers the harsh reality of feeling unequivocally stripped of any sort of meaningful existence in a way so wrenching and seemingly personal that one cannot help but dwell on the significance of the issues raised in her novel.

Any reader who appreciates The Bell Jar in all its frank openness should be sure to attend the book discussion, which is absolutely free. However, prior booking is recommended through the Gala Theatre website.