DBF: An Interview with Sandi Russell 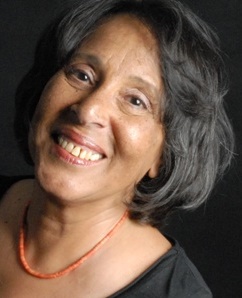 Having achieved success both for her critical work Render Me My Song – African women writers from Slavery to the present, and as a Jazz singer, Sandi Russell recently gave a reading of her first novel, Color, at Durham Book Festival. A review of the reading can be found . The Bubble sent Alex Opie to interview Sandi at her home in Durham and, amid the coffee and biscuits, to find out more about the intriguing themes her work explores.

The Bubble: You’ve been involved with many other forms of writing in the past but Color is your first novel. What was it that prompted you to write a novel now?

Sandi Russell: I think this novel has been “in me” for a long time. My mother is from the part of Virginia, near Jamestown, where “America really first started.” Every time I would visit there it was as if the land was speaking to me and even my relatives were speaking to me, saying “write about this.” There was something coming from that area that was agitating me. Because of some of the things a few of my relatives said to me about Virginia law and history I found myself reading a great deal, and before I knew it I had started writing this novel which originally wasn’t your linear novel; it was poetry and prose. It took the form of what Black Americans know as “call and response” in the Baptist church. The poetry was the statement; the statements were made in the seventeenth, eighteenth and nineteenth century, depicting a situation or a character. The response was in prose, from the descendants of the people speaking in the poetry.

TB: Being in the audience at your reading at the Durham Book Festival, I heard you read with such cadence and expression. When writing, do you often consider that your words might be read aloud?

SR: I didn’t write for my work to be read aloud but I’m a natural performer and I wanted as many people to hear about the book as possible, not just because I wrote it. I think a lot of the information in the book should be known and would be interesting to people who know little or nothing about the culture I write about. My writing is informed by music and it should have a pulse, as a poem or song would.

TB: You have obviously incorporated your extensive music knowledge into your writing. One of the characters in Color talks about how hip hop is misrepresenting black culture. Do you believe this misrepresentation is a problem for society?

SR: Some hip-hop music has been detrimental to a group of people who already have difficulty reaping the benefits of society, and what they can hope to gain. It doesn’t help people in understanding black culture; hip-hop, which was once political has now become so sexualised, particularly in its presentation of women.

TB: As well as references to different styles of music, different texts have been included as a kind of prelude and epilogue to Color, such as a snippet from the poem written for President Clinton’s inauguration, as well as your own nature-driven poetry that offers a voice to the river and Pocahontas. Through the inclusion of these texts are you trying to present the “American Dream” as something that means different things to different people?

SR: I suppose it does to some degree but really it means Freedom – the freedom of having plenty, and a life without stress where all the good things are yours. There is the promise that America will deliver but sometimes this victory can be hollow. It doesn’t always deliver the things that are important such as love, peace and respect. I was looking at a dollar bill the other day and it says the famous line “In God We Trust.” In America sometimes religion and monetary value can be seen as one. Many detrimental things have been done in the name of religion: slavery was one of them.

TB: Color contains multiple voices and many shifts in perspective that frequently alter the tone. Why did you decide to do that?

SR: I wanted to show a microcosm of the disintegration of the South and also how the “American Dream” has affected every one of these people in the book. It has failed and deluded them and they are the voices of a wider problem.

TB: You mentioned at your reading that Henrietta was the ‘lynchpin’ in Color. Is there a particular reason you used her character for this role?

SR: We writers have to get our point across and I wanted a voice that would get to the underside of America’s history. The voice of a “madwoman” allows you to express hard truths in a comical way; it is not about what Henrietta is saying but how she is saying it. She encourages readers to involve themselves.

TB: Do you have any advice for The Bubble’s readers who are aspiring writers or are looking to get published?

SR: The situation in publishing at the moment is very difficult because suddenly everyone believes they’re a writer, but just be dedicated, persistent and believe in yourself. Don’t think you have to write to fit into a category; just persevere and be patient that you will be heard, seen and read.

TB: What are your plans for the future; is there another novel in the pipeline or are you planning on returning to music?

SR: I’m going into the studio soon to record the audiobook of Color. The reading was a great way of practising the voices for some of my minor characters but I also hope to make another CD.

Sandi Russell’s Color is published by Mosaic (Teesdale) and is available for purchase from retailers now.