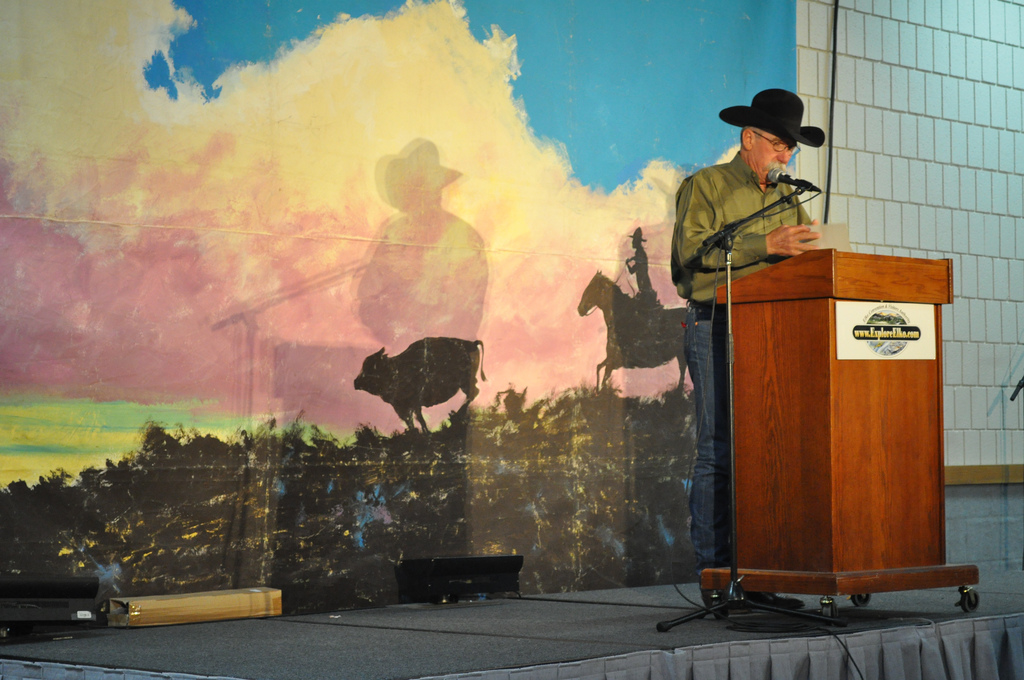 On November 1st, the good people of Heber City, Utah will celebrate the opening night of the Cowboy Poetry Gathering and Buckaroo Fair. A few months later, preparations will begin in earnest for the 25th Annual Texas Cowboy Poetry Gathering in Alpine, perhaps the only poetry event with its own spurmaker (this year, Mr. Wilson Capron). The timing for this event is less than ideal; it comes one short week after the National Cowboy Poetry Gathering in Elko, Nevada, named by Glamour magazine as one of “the ten best places in America for a woman to find a real catch”. Known as “the National” (a Senate resolution has deemed it the only Gathering worthy of the name), but also simply as “Elko”, the town has hosted an annual cowboy poetry event of one sort or another since 1926. As their (incidentally brilliant) website informs us, “all of this makes any sensible person wonder.”

In Elko in 1926, the Pioneer Hotel played host to a poet called Badger Clark, a 43-year old minister’s son who was one of the best-known cowboy poets of the time. His “Cowboy’s Prayer (To Mother)” would later be recorded by Tex Ritter and Johnny Cash. Today, cowboy poetry is mostly published online and in specialist journals, but Clark had work placed in Pacific Monthly and Poetry (Chicago) throughout his career. His first volume Sun and Saddle Leather ran to forty editions, and his Collected Poems was probably the best-selling poetry book of 1920. Dr. T. W. Hornaday reviewed it: “Some of the Sun and Saddle Leather poems have taken hold of me with a grip that only imbecility even can shake loose.” Ruth Hill wrote in the book’s preface that “he has tied the West to the Universe”.

This is pushing it somewhat. Since the Preface was written, cowboy poetry has become resolutely insular. (It is the only poetic genre I know of where a regular trope is a plea for stronger border controls.) It has also developed very little. A stanza of Badger Clark’s poetry is tonally indistinguishable from one of a cowboy poet writing today; they are reproduced side-by-side below for comparison.

I ride alone and hate the boys I meet.
Today, some way, their laughin’ hurts me so.
I hate the mockin’-birds in the mesquite—
And yet I liked ’em just a week ago.

But you rarely found a rider,
or a nighthawk or a cook
That couldn’t lose himself inside
a good, old fashioned book.[1]

One hundred and fifty years of cowboy poetry have seen no technical innovation; metre, rhyme and tone are the same in poets today as those of 1850. Similarly, there has been no real expansion in subject matter; given that it is one of the few poetic genres demarcated by the job of the poet (imagine plumber poetry or dentist poetry), this is perhaps unsurprising. At its worst, it can descend to kitsch and dangerous mythologizing of a violent, lawless period in America’s history, which glosses over environmental destruction and Native American genocide.

I don’t think Clark’s poetry is “tied to the Universe”. More crucially for its current reputation, it isn’t tied to the University. As Hill writes, “cowboys are the sternest critics of those who would represent the West” – the sternest and, in the present day, the only. Their sole critical criterion seems to be how “genuine” the poem is; this amounts to whether or not the author is an actual cowboy. Ignoring Kris Kristofferson’s wise proscription (“If it sounds country, then that’s what it is, it’s a country song”), reams of biographical information are cited to judge one poets’ cowboy reputation against another. Sometimes this descends into farce. Here is Hill on Badger Clark: “He is a church member of irreproachable daily walk and conversation but somewhat uncertain orthodoxy. He never wears a starched collar and generally appears in a coat only when meteorological conditions or an occasion of ceremony make it necessary. He is six feet tall.” Three critical books have been written on Clark’s work, all of them biographical. The website of the Badger Clark Memorial Society reproduces all his Christmas cards (“Many thanks for the sherry pralines”). This makes a refreshing change from impenetrable critical theory, but at the same time it is somewhat limiting.

Cowboy poetry at its best calls to mind Kipling, first of all[2] (and we should remember Kipling’s Selected Poems was edited by T. S. Eliot). The thundering metre, the representations of dialect and the sing-song rhymes are familiar to an audience brought up on Barrack Room Ballads. George Orwell, a shrewd literary critic, writes an essay on Kipling which I believe is largely applicable to most cowboy poetry also:

Mr. Eliot describes Kipling’s metrical work as “verse” and not “poetry”, but adds that it is “great verse” and further qualifies this by saying that a writer can only be described as a “great-verse-writer” if there is some of his work “of which we cannot say whether it is verse or poetry”. (…) Even with his best passages one has the sense of being seduced by something spurious, and yet unquestionably seduced.

With that in mind, here are some excerpts from cowboy poems which I think come close to these “best passages”.

It may cause a feller to weaken,
It may sort of shorten Life’s path;
But I’ll tell you right here, plainly speakin’,
I sure do enjoy a good bath!
Said Charlie, “Son, I dabble at creating cowboy verse.
Sure it won’t stop the cravings of my always hungry purse.
No gentle, smooth-mouthed horses fit the underside of me.
It takes a hair-brained renegade to cede my poetry.”
But It aint as if I got bucked off,
you know, I bailed out of that wreck,
and I’m pretty agile for a fat ol’ man,
otherwise I would have broke my neck.
He grabbed the tube, and applied some lube,
And what he did next was quite heinous,
The sire turned pale, as he seized his tail,
And shoved the hose up his anus!
Castrating a calf is a matter of taste;
Some do it slowly and others in haste.
A wolf is a might mean varmint at heart.
He is cruel and wicked, and man! is he smart.
So I never could pity a wolf a whole lot
If he got caught in a trap. I was glad he was caught.[3]

Cowboy poetry, as you may have gathered, is an unusual genre. It is also extremely popular. The various Gatherings and Roundups, often featuring a mock campfire in the centre of the stage, draw audiences far in excess of many regular poetry readings. Several cowboy poets (Baxter Black is prominent among them) have their own poetry-themed radio shows. Many make a good living as songwriters; Steven Fromholz, 2007 Poet Laureate of Texas, has written for Willie Nelson and Lyle Lovett.

One of my favourite things about reading poetry is the junkyard, going-up-into-the-attic-with-just-a-torch feeling. The best poetry casts everyday stuff into weird focus; Byron’s feelings on fish-sauce, William Carlos Williams thieving plums from the fridge (I had a housemate just like him in my second year of university), Plath foolishly letting her toddler chew a balloon. Deep ruminations on sex and death are all very well, but imagine if you met your friend for coffee and that was all they talked about. Somewhere in the corner of that attic there’s a trunk labelled “Nondescript Americana”. You slide it open and lift out the book, vast as a Gutenberg bible and titled Cowboy Poetry. Sitting down among the detritus you blow off the dust, open it at random and begin to read.

[2] To this (English) reader. To an American reader, the presiding spirit is more likely to be Robert Service, who is barely known in England; to an Australian, Banjo Patterson. All three were roughly contemporary and wrote very similar poetry. (For my money, Patterson is the best of the bunch. “The Man From Snowy River” is an incredible poem by anybody’s standards.)