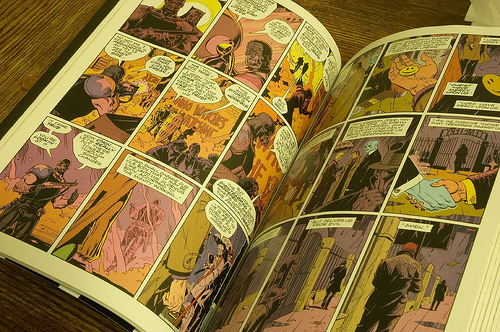 Who watches the Watchmen?

As I start writing this I can see your eyes already, those accusing eyes, “This is a Literature section,” they seem to say, “at Durham University! Take your silly picture books away and read a real book, for real people. And then have a shower.” It’s okay, really, I’m used to this, used to my girlfriend’s sighs while I expound my ideas to the walls. “It’s okay darling, he’ll shut up soon,” she mutters to her English Literature degree as she drifts off to dream text-only dreams. I’m used to my classmates bewilderment as I describe the educational benefits of reading Arabic comics, “Where’s your pre-Islamic Arabic poetry?” they ask as I skip out of class unburdened by weighty reference tomes. The worst of all though, is the film buff. “Comics? Oh gosh I loved The Dark Knight.” This article goes out to you, you poor, poor people, for you know not what you do.

You see, it is my insistent opinion that the influence of the “comic book film” on the comic as a nervously emerging art form is the equivalent of a rooftop avalanche on an unsuspecting student. It reinforces two of the most incipient ideas about comics, firstly that they are predominantly about superheroes or violence, and secondly that they are effectively just story-boards for Hollywood studios, the poor man’s movie. Now, admittedly, most comics are indeed about violence, and yes, such mainstream comics often seem to be prostituting themselves in front of the film studios, but these ink-covered hussies are to the art of comics what Twilight is to great literature.

Allow me to throw this out there: comics are a combination of pictures and text, just like film, but neither medium is merely a combination of pictures and text. The way comics combine those two communicative forms is unique, different from film, and amounts to an artistic medium in itself. Take, for instance, how time exists in the comic; it is not simply linear, it exists as a collection of frozen points, which can be viewed and reviewed in any sequence. In a comic, the direction of time is defined by the reader. And not only does the direction of time vary, a comic panel can express a second, an hour, or a day, in a stationary, single picture. The transition between panels can encompass years, or no time at all, and what occurs in that intervening time exists to be shaped by the readers imagination. Comics offer a potential for reader interaction unmatched in any other form, and certainly untranslatable to film.

A truly great comic then, will make full use of this potential, and many other unique aspects, to produce a piece of art that could not be expressed identically in any other medium. It is my, now more serious, opinion that the mark of a great comic is not that it has been made into a film, but that it is incapable of being made into a film, incapable of being translated precisely into any other medium. Take the inevitable Alan Moore quote about his recently filmed masterpiece Watchmen:

“I didn’t design it to show off the similarities between cinema and comics, which are there, but in my opinion are fairly unremarkable. It was designed to show off the things that comics could do that cinema and literature couldn’t.”

Of course the resultant film, while as true to the source as possible, was a critical failure. Whatever made Watchmen one of TIME magazine’s greatest novels of the 20th century, couldn’t transfer to film.

Other examples abound, such as the Pulitzer prize winning Maus, described by the Wall Street Journal as “the most affecting and successful narrative ever done about the holocaust” (and they’re right, it makes Schindler’s List look like the Inglourious Basterds). Art Spiegelman, the author, has repeatedly refused to allow it to be made into a film, as well he might; the pacing, the imagery, not to mention the breadth of scope and transitions of time, are unimaginable in any other form. Spiegelman told a story, that could have been told, in its most basic form, in any medium, but his skill with comics takes it beyond the basic and into the realms of mastery. Simply put, the story of the Holocaust exists in many forms, but Maus could only exist in comics.

But who here has read Maus? Or Adrian Tomine’s exploration of the disconnection of city life in Sleepwalk? How about Thompson’s beautiful and sad meditation Blankets? Or the post modern stylings of It’s a Good Life, if You Don’t Weaken? For the most part, the art of comics is now inherently bound up in the art of films, in Iron Man and the Dark Knight. Of course the great irony is, in fact, that if a comic is capable of being made into a film, it is, almost by definition, a bad example of a comic. Admittedly, light, whimsical comics like Scott Pilgrim have made very effective light and whimsical films, and Sin City is an interesting case which I will spare you in this piece (pity my girlfriend). But the point remains, the continuing plethora of comic book films simply reinforce the idea of the interconnected, and symbiotic nature of the two media.

If all of this results in simply obscuring and hiding the work of talented artists and writers, then it is hardly a new phenomenon. Serious comics of the sort I am discussing started in the ’70s with Will Eisner, and by and large, have not grown much in mass appeal since then, obscured as much by comics’ own stereotypes and superheroes as by associations of other mediums. But, arguably, comic book films do more than simply obscure. Films offer comic writers and publishers an escape from the preconceptions and judgements that plague the comics industry. By allowing works to gain elusive mainstream acceptance and recognition, “The Comic Book Film” becomes the apex of the art of comics, and removes the need, or indeed desire, to look inwards and explore the potentials within the medium itself. The real art of comics is resilient, it wont die, but as long as comics cannot find main stream appreciation without resort to film, its development will be sadly curtailed.