Character Changes in Les Misérables: from book to stage/screen 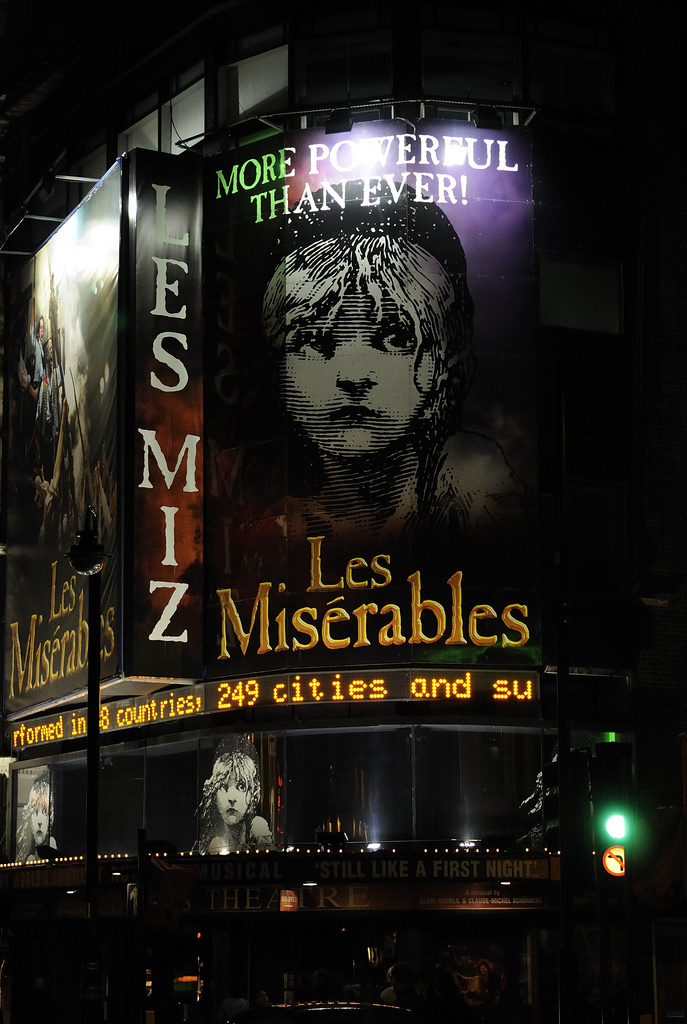 Who do we have here? Not the “Disney princess-perfect Cosette?”

The vast majority of people reading this I suspect would have heard of the longest-running musical and newly released film, which will no doubt win Anne Hathaway an Academy Award for Best Supporting Actress. The majority of those will know that the film and musical are based on Victor Hugo’s mammoth of a politically charged novel. Of course, in adaptations some things are inevitably, well, adapted; dates may change, events may be cut and characters may be altered a little, which always seems to annoy fans, but the fact that certain characters have been fundamentally changed; these being Javert, the Thenardiers and the female leads of Cosette and Eponine.

Javert is the primary antagonist of both the novel and the show, but what really characterises Javert in the musical is his dogmatic belief in God. His song Stars is full of religious language: he describes Jean Valjean as ‘Fallen from God//Fallen from Grace’ and swears to God that he will catch Jean Valjean. He asks God for help in his quest; he explicitly says ‘Mine is the way of the Lord’. It would be an understatement to say that Javert is deeply religious in the musical, which is odd considering that Javert of the novel follows the law purely for the sake of following the law- a legalist to the core. This Javert is quite atheistic, and only really respects religion as an extension of authority. In other aspects the character Javert is similar in both the novel and the adaptations – he is an upright, law-abiding man; perhaps cruel but ultimately misguided. This is a concept stressed more in the novel, but I feel that the musical still successfully portrays Javert as sympathetic and misguided rather than evil. Victor Hugo’s message in this characterisation is that Javert represents the laws of nineteenth century France, and how those laws were ultimately flawed.

The real evil in the novel is embodied by the Thernadiers, who are cast as the much-needed comic-relief in the musical. Their entrance song ‘Master of the House’, whilst undoubtedly portraying the Thernadiers as being antagonistic, also shows them conforming to the ‘Loveable rogue’ stereotype; perhaps they are the characters that you love to hate. There’s something fun in the way that they con and swindle people, and they are used to great effect for both physical and lyrical comedy. It is because they are portrayed in this way that people don’t get angry at the fact that effectively these villains get off scot-free; there is no punishment for the Thernardiers at the end of the musical or film. In fact, we know they are even better off than they were, having looted the bodies of the rich students during the uprising. We do get flashes of their nature from the novel in the musical with Thernadier’s song in the sewers ‘Dog Eat Dog’. Whilst this is a stark contrast to the more comical ‘Master of the House’ it still doesn’t really capture the nature of the couple according to the novel.

When it comes to Cosette we simply get a watered-down version of the character in the musical; so watered down in fact that if one were uncharitable they might say that it would be a stretch to call her a character. She is Disney Princess-perfect and her character wouldn’t really be that out of place with a menagerie of talking animals, so naive is she and so little does she know of the outside world. In the novel, whilst she is still sweet and naïve she has a proper personality; she is more world-wise and is committed to helping the poor, so much so that she contemplates becoming a nun and devoting herself to charity. The musical does show her and Valjean helping the poor of Paris, but she seems like a passive participant. She is more active in the novel; rather than simply waiting for Marius to whisk her away she actually engages with people and the world around her, and wants to escape her sheltered life. Her relationship with Marius grows over the course of several months in the novel, rather than the instant ‘love at first sight’ which happens in the musical. This is not only gives realism to the characters but also to their relationship. A relationship which seems almost forced in the musical rather than a natural development as in the novel. The relationship is either too perfect for such a tragic setting or it is a relationship built purely on physical attraction rather than on personalities, both of which seem unfulfilling and lacking. Cosette’s devotion to charity is included to represent the fact that she, like Valjean, has been persecuted. However, she is never cynical like Valjean was before his encounter with the Bishop of Digne.

In the musical many people want Marius to be in a relationship with Eponine, partly because Cosette is so stiff and partly because Eponine is likeable in the musical. She is to be sympathised with – spoiled as a child but now destitute and effectively forced to help her father steal; her unrequited love for Marius makes ‘On My Own’ a very moving song. So what makes her character different in the novel? Well, Eponine acts as the opposite to Cosette: she is selfish, spiteful, conniving and practically insane, complete with hallucinations and suicidal thoughts. This is not to say that we feel no sympathy for Eponine, but rather that she is not a likeable character, merely a pitiable one. The film shows Eponine dying to save Marius as in the novel, but in the latter she dies hoping that Marius will also die so that they can be together in heaven. She also convinces him to go to the barricade in the hope that he will die. It is arguable that her love for Marius redeems her, but the fact that she wants them to die together sours her love. Eponine is an interesting character in all media but very different in the novel to the incredibly likeable and relatable character of the musical.

As someone who loves Les Misérables in all its forms, be it novel, musical or film format, it is interesting to see how things change in adaptations: what is lost, what is added and how characters are portrayed. There is no criticism in my analysis of these characters merely observations and hopefully others will feel inspired to pick up the novel and see what else is lost in its fantastic adaptations to stage and screen.