Elizabeth Briggs in Literature on 24 November, 2012. 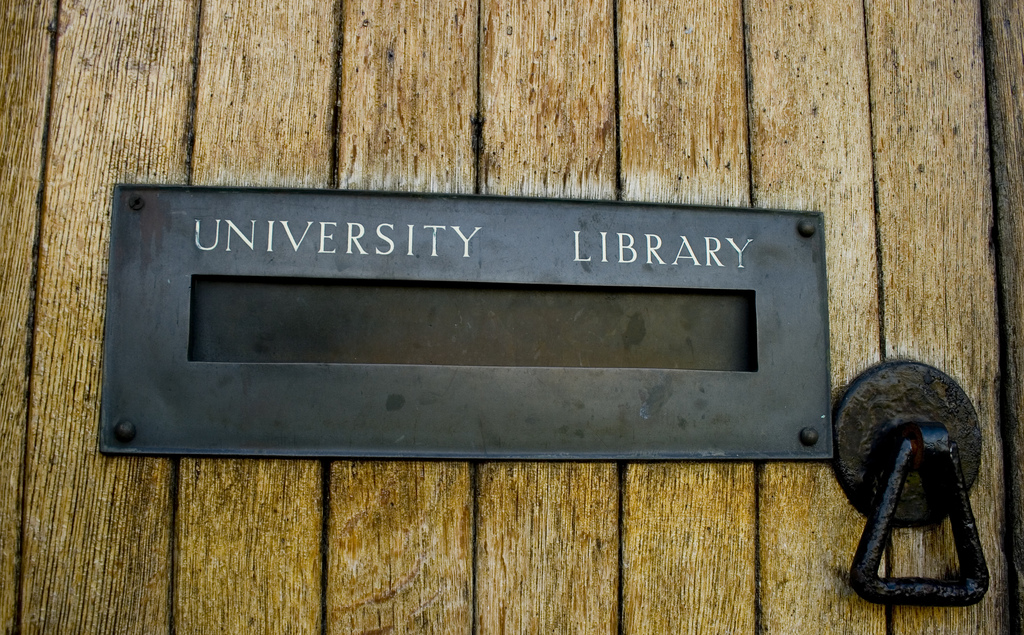 With the World Wide Web at your fingertips, it is sometimes easy to pass by those ancient and revered volumes on our very own doorstep. During the Durham Book Festival, the Cathedral’s private wide assortment of treasures was on display in the Cathedral library. It was a rare opportunity to peruse (as far as it is possible to peruse a book labelled strictly ‘DO NOT TOUCH’) a charming collection of books, most of which are kept locked away for the majority of the year and can be enjoyed but by the few in the know and with the say so.

There is something so much more impressive about a hardback than a laptop. Cumbersome, yes, and hardly portable. A complete nightmare to consult I imagine, and finding your relevant material in even Samuel Johnson’s 1755 first edition Dictionary of the English Language is rather like searching for a needle in a haystack. This particular volume was around fifty centimetres in height, a solid thirty centimetres in width and goodness knows you can only speculate on the breadth of the thing. As a collective dictionary it was unsurpassed until the Oxford English Dictionary came along over a century later, and it took six helpers collaborating to define some forty thousand words, all those years ago.

Johnson’s dictionary might walk away as the biggest article in the Cathedral’s collection, but the title has nothing for size in comparison with the 1756 Charles Jarvis’s translation of The Life and Exploits of the Ingenius Gentleman Don Quixote de la Mancha. At least that particular article was not painstakingly hand copied, unlike the late 18th Century scripts of Handel’s L’Allegro and Il Penseroso by John Milton. I suppose we ought to be grateful that this isn’t a task necessary anymore, but whether our fonts will still be admired in three hundred years’ time is an unlikely likelihood in comparison.

Some of the more famous books that feature in the collection include a 1749 copy of Paradise Lost, a 1751 copy of The Faerie Queene, illustrated by artist William Kent and Gulliver’s Travels complete with hand coloured copper templates, dating back to 1805.

If the history of the library’s collection is what appeals to you, than this selection does not leave you wanting. Some of the stories behind the books bequeathed to the library are fascinating, such as the book donated by Meade Falkener (1858–1932) who was actually chairman of the arms manufacturer Armstring Whitworth during WWI, until he retired and became honorary librarian to the Dean and Chapter library of Durham cathedral. In it was included a sermon by Peter Smart, delivered on the 27th July 1628 in Durham Cathedral. The content of the sermon remains a mystery, but church authorities later burnt the sermon and imprisoned Peter Smart for twelve years.

The most remarkable items amongst the collection are those which have character about them: a volume that has been cherished by somebody, and when the owner remains a mystery, even more so. Although there are kindles and podcasts galore, and so many texts are readily available through ‘Googlebooks’ or are downloadable due to outdating their copyright, we still like to give and receive books in the flesh. This isn’t a surprising observation: after all, for millennia it has been possible to gain access to your target read for no fee with a library acting as middleman. There is something dear about a weighty book in your hands that you can take around with you from place to place, leave for a time and then retrieve with newfound enthusiasm. These kinds of books are so personal that they assume a personality all of their own, and reading them is an experience all the richer for that.

Take the diary. The beautifully bound and lockable album compiled by Georgiana, the Baroness Bloomfields from 1822–1905, includes fastidiously sorted and safeguarded letters from the likes of Prince Albert, Abraham Lincoln, The Duke of Wellington, Edward Lear, Wordsworth, a sketch plan of the Battle of Barcelona by Lord Cardigan and a letter from Dickens to Robert Lytton about the influence Lytton’s father (Edward) had on Dickens’ decision to rework the ending of Great Expectations. The value of this album is immense, and the letters themselves (no great works in their own right) are valuable not only on account of the hand that held the pen, but because they meant enough to the Baroness that she took time and trouble to keep them well stored. I cannot help thinking that many of our oldest and most highly regarded pieces of literature have come to us because trouble was taken to ensure that they were meticulously recorded in an aging resistant format: the tablets of Ancient, ancient texts such as Atrahasis and Enuma elis are excellent examples of this. Although all modern texts can be easily circulated on the internet, perhaps the ease by which we can access them means that we no longer exert the effort to. Compared with the physical act of handwriting or hewing a work, art on the intangible, abstract cyberspace is words written on water.