Time is deployed in both texts to explore futility of the human condition more closely; consequently diminishing the heroes’ stature in light of an uncaring universe. Tragedy is embedded in the existential struggles of the characters in both plays: Willy’s psychomachia is uncovered by the juxtaposition of psychic and social time; the gradual conflation of the two show his descent into artificial constructions of reality and performativity of character. Any remaining vestiges of his identity are visibly suppressed through Miller’s choice of expressionism within the setting of a mechanised, industrial society. Music signifies the shift from one timescape into the other, and Biff’s discovery of Willy’s affair with The Woman precipitates a collision of times which marks the beginning of Willy’s suicide: Miller repeats Biff’s rejection of Willy in both scenarios. Willy’s childlike confusion at this second abandonment – ‘ “But we were supposed to have dinner together.” [Music is heard, Willy’s theme.] ’ – shows that familial love is not going to save him. Loneliness is central to both plays and the pathos of the protagonists. There are quasi-nihilistic undertones in the texts, particularly ‘Waiting for Godot’: the opening line ‘Nothing to be done’ connotes a resignation to reality which is revisited at the end, with the continuation of their waiting for Godot. The original French title ‘En Attendant Godot’ is important to consider when speculating on the nature of ‘waiting’ in the play. ‘Attendre’ in French means to pay attention to, as well as to physically wait for someone. This sense of demanding attention from the universe for the individual is even starker in ‘Death of a Salesman’. Linda, deployed as a mouthpiece for Miller, chastises the audience: ‘But he’s a human being, and a terrible thing is happening to him. So attention must be paid…Attention, attention must be finally paid to such a person.’ The triple repetition of ‘attention’ makes the play appear urgent and critical – castigating the audience and demanding that Willy, as a ‘Loman’, be treated with importance. This suggests modern tragedy aggrandises the individual as much as classical tragedy: the vision of human greatness, while not as clear-cut, is equally valued. 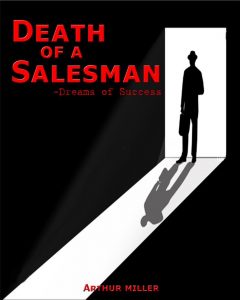 Beckett extends this further through elements of dialogue and staging: his exploration of time is very similar to Miller’s. Psychic/interior time (‘durée’) is continuously offset by the inexorable mechanical time which so destabilises Vladimir, and to a lesser extent, Estragon. Distinguishing between these types of time results in a treatment of past and present which embroils the audience in the characters’ displaced universe. Estragon attempts to work out what day it is and when action occurred previously; all to no avail (cf. pp.16 – 17, Waiting for Godot). The lost sense of time by the clock forces the tramps to rely on the interior experience of waiting: Beckett presents them as overly-concerned with entertaining themselves to stave off the oppressive condition of endless anticipation. Calderwood contends that the circularity of the plot is reinforced through the ending: ‘if the ending of the play is in one sense a theatrical death and entombment, it’s also, as we’ve seen, a preface to resumption…The play, like the round, has neither beginning nor end; the title merely marks a pause…’ Such an evasive structure strips away metatheatrical preconceptions; to gain meaning is to pare down everything through a process of unselfing. The cyclical form accommodates the messiness of Beckett’s presentation of time and meaning in the human condition. ‘Waiting for Godot’ confronts the audience with the nihilistic worldview of post war society by undercutting our notion of tragedy through the absurdist form; it acquires a darker potential in this way. Miller is surprisingly similar in his eventual resignation to greater forces – in his case, consumerism and twentieth century anonymity. Biff’s declaration ‘Pop, I’m nothing! I’m nothing, Pop […] I’m just what I am, that’s all.’ uses a chiasmus (Pop…nothing…nothing…Pop) to illustrate how far Biff has internalised the financial value system (by which Willy lives) and assessed his worth accordingly. By promoting the protagonist’s beliefs Miller asks us to question the central protagonist: his misguided conception of the American dream and pathetic anonymity has two effects: it distances the audience, evoking our sympathy but also distaste, and it also transforms him into an everyman figure as he takes on the values of many twentieth century businessmen – this anonymity adds to the pitiful tone of the play, much like in ‘Waiting for Godot’. Willy’s self-ascribed past, and inability to separate illusion and reality constructs himself a social role to play. Such metatheatrical awareness is also visible in ‘Waiting for Godot’, where the eponymous refrain gains a performativity which subverts any understanding we may have about why Estragon and Vladimir are waiting. Fundamentally, both plays characterise the ‘tragic heroes’ as men caught in stasis with no escape.

I think it is this sense of entrapment which ultimately defines both plays as tragedies. ‘Death of a Salesman’ has an explicit motif of being ‘boxed in’ – symbolically shown on stage by towering skyscrapers surrounding the house, and Willy’s futile attempt to find a way out by planting seeds in his madness. Aristotelian tragedy comprised two basic emotions of pity and terror. Both are found in ‘Death of a Salesman’. In ‘Waiting for Godot’, a Bergsonian approach is adopted: the tragicomedy sets out to retain empathy of suffering of tragic characters, but offset it with ‘comedy of the machinic’ – the grotesque counters the bleak by grounding the tragedy in material humanity. The prominence of fleshly decay is accentuated through Estragon’s dialogue, whose concern with bodily degeneration draws attention to the theatricality of performance: the play is a waiting game to be endured while pondering mortality and its meaning. This Kantian duality between mind and body is intriguing to consider, but does not impact upon the plays’ classifications as tragedies: yet it is worth noting the concern, in both texts with the state of the human mind. It is what leads to the quasi-cathartic moments in both texts: Willy’s ‘sacrificial’ suicide is reframed as a moment of heroism and martyrdom in his mind, before being undermined by the bathos of Linda’s confusion in the ‘Requiem’. The tramps’ momentary consideration of suicide is radically different; they do it to avoid boredom and the loneliness of death, yet when they start to doubt the communality of death, they dismiss it. No catharsis really takes place: this is deliberate on Beckett’s part: his generic staging of a rock, tree and road, and unlocatable time, and minimalist use of characters – three of the five are purely episodic – all points towards an interpretation of tragedy as universally applicable. Miller sets his within a particular culture, but deploys a new kind of tragic hero – a ‘low man’, to relate tragedy to the common person. Both plays, then, investigate the idea of ‘human greatness’ by calling into question what is ‘great’ or even meaningful about humanity, to craft modern tragedies which redefine the tragic genre to address modern concerns with human purpose.