Nicola Todhunter in Literature on 5 December, 2012. 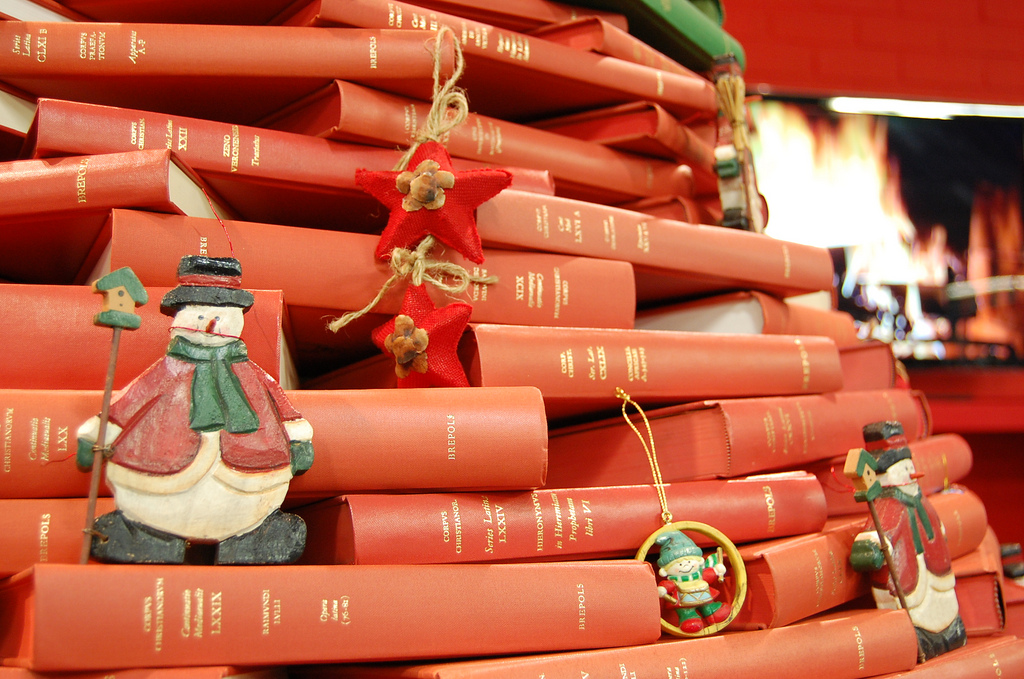 For me, Christmas has never been complete without seeing at least one or two parcels of a book-shaped nature under the tree in the morning. My parents used to get frustrated when my yearly wish list could be fulfilled by a simple trip to Borders, or a click of the mouse at Amazon (though this year, with a healthily long reading list, compliments of the University- this may change!) There is a book out there for everyone, and while some people see buying the latest best-seller as a bit of a cop-out gift, I believe that if you look for the right thing, giving a book as a present can be one of the most thoughtful ways to show someone what they mean to you. So without further ado, here are a few ideas. They may not be on the Guardian’s ‘hot books of 2012’ list, but in my opinion they are all excellent ways to pass the time after Christmas dinner, and perhaps to even afford a laugh or learn something in the process.

‘The Christmas Mystery’ by Jostein Gaarder

It would be a crime if I did not include at least one Christmassy-themed book in this article, and for me this is one of the few seasonal books worth a reading. I was given this when I was about nine in lieu of an advent calendar – the idea being that I would follow the structure of the book, reading a chapter a day instead of scoffing a chocolate. Naturally, as any other child would do left with control over a normal advent calendar full of chocolates, I stayed up all night on the first of December with a torch and gorged myself of Gaarder’s puzzlingly sweet story. It would be hard to sum it up in a pithy sentence – I refer you to the product review on Amazon.com for a factually accurate blurb that does no justice to the sense of wonder this book still inspires in me when I re-read it, nine years down the line.

‘A History of London’ by Boris Johnson

As wacky and brilliant as you’d expect it to be. For those people in your life who are casually interested in history but like it to be told in an accessible way, and who also enjoy quietly chuckling at Johnson’s prose style – lively and enthusiastic, though more coherent than most of his speeches; you can tell that he does take the subject very seriously. This is the sort of book to be read while other people are pottering around clearing up the Christmas mess or basting the turkey, while you regale them every now and then with a fun fact about Londinium courtesy of BoJo.

This is one to give the graphic design or typography nerds close to you (or a lover of art.) The thought and history apparent in every element between these iconic covers is astounding to read about, and illustrated with beautiful reprints of some of the best examples and most famous images. I rarely come across a book so full of fascinating detail on things I’d never have thought I would be absorbed by – the evolution of the Penguin logo, the positioning of the title on the cover, even the widths of those famous orange and white blocks on the old Penguins (if I remember rightly, several pages at least are devoted to this, and surprisingly, it is not dry or pedantic at all.)

Encouragingly given to me last Christmas as inspiration, and because laughing at other people’s foolishness is an excellent ego-booster. Though these are GCSE-type questions, it would make an amusing stocking filler for older students and your younger brother/sister/cousin alike. (Another one in this theme, if you know people who are into this sort of thing, is Universally Challenged by Wendy Roby.)

This is the first in an on-going series of fantastic novels that combine thrilling detective mysteries with a fresh take on fantasy (not something you can say often nowadays), and which will probably be nothing like anything you’ve read before. The concept – wizard detective solves magical mysteries in modern-day Chicago – might seem a little cliché and predictable, but the result is anything but. Not to mention it will often leave you crying with laughter – the titular Harry Dresden has a brilliantly dry, sarcastic wit (you sometimes get the feeling he has watched too much Buffy the Vampire Slayer) and there is also a randy memory spirit trapped inside a skull. It is not nearly as cheesy as it sounds and in fact, it can get quite dark as the series goes on, so not the best gift for younger readers. The only drawback is that buying someone the first book is spending any spare Christmas cash for them as well – they will almost definitely get hooked and need to shell out for the other thirteen!

‘The Line of Beauty’ by Alan Hollinghurst

Another novel that is a challenge to summarise neatly, the most justice I can do it is to describe it as a stunningly tender yet stark work that traces the fates of a gay aesthete in 1980’s London. Yes, it addresses the natural themes – Thatcherism and its impact, lives of the rich and poor, hedonism, casual sex and its consequences, and drugs– but it does not do so conventionally or dull them; nor does it rely on these themes overtly to hammer home whatever social or political message you choose to read in it (there are many to choose from, but it never preaches). It is not, perhaps, the most cheerful book to receive as a present, but choose it for the right person and they will thank you for introducing them to this splendid author.

‘The Fry Chronicles’ by Stephen Fry

As a bit of a fan-girl I do admit some bias, but I recommend you buy this autobiographical gem for anyone close to you who happens to like Mr Fry, especially his work on Blackadder or A Bit of Fry & Laurie, or anyone who seems to be using their time at university more to walk the boards or operate fly-bars than to sit in lecture theatres. This is Fry’s second autobiographical work – the first, Moab is my Washpot (also excellent, buy them as a set!) details his time at primary and secondary school, through to his arrest for credit card fraud aged seventeen. The Fry Chronicles picks up the story, and we follow Stephen through his time at university and the formative years of his career as a comedian, presenter and writer. It also, of course, goes off on delicious little tangents about anything and everything, in delectable prose that flaunts a delight in language, as Mr Fry is wont to do – which is part of the book’s beauty, and the whole thing will make anyone with a soul laugh, smile, and weep and dance with joy. It will also change the way you watch QI.