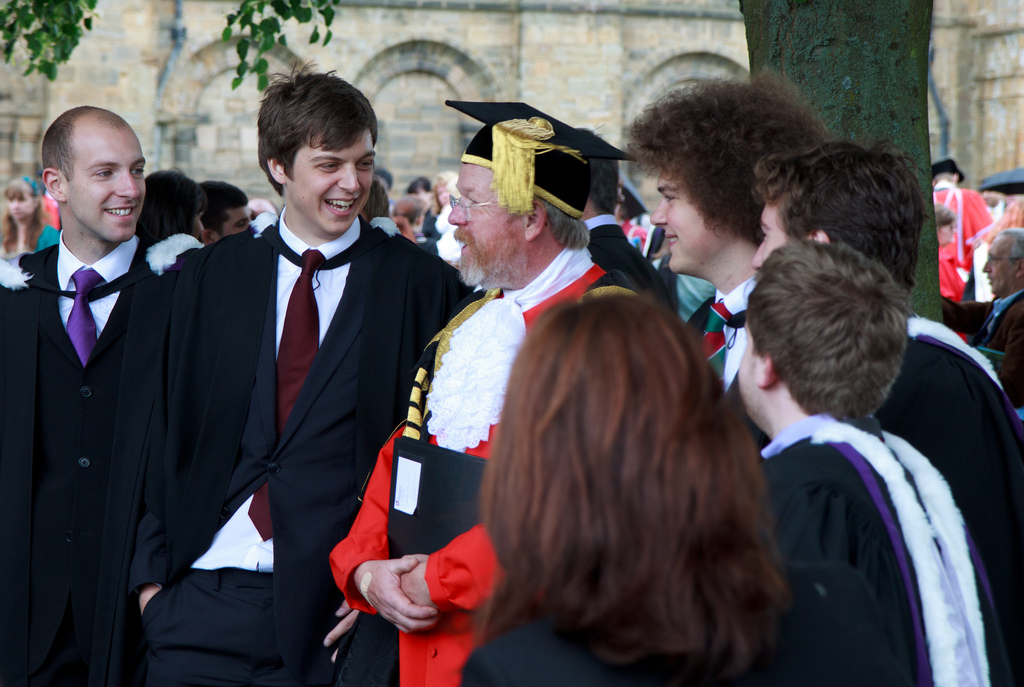 Durham University Library now proudly displays Bill’s name, and we think it is high time that we published a little overview of his work to date!

Bill Bryson’s interest and quest for knowledge is what makes him a perfect namesake of a university library; interest, not only in our own specific subject, but in discovery more generally, is what drives academic study at university. And that is precisely what Bryson’s books are all about: his wide-ranging interests are evidenced in the range of genres that his books span: from travel writing to science, language to history, to autobiography.

In At Home, for instance, Bryson takes an engaging approach to history. He starts with the familiar surroundings of his home in the English countryside and within each chapter focuses on the history of a different room. The resulting tales of continuity and change of individual people and artefacts give a fascinating picture of the past as it relates to elements of our everyday lives and thus our own personal history. Bryson’s books explore all those different elements which contribute to our sense of identity: origins and experiences, people and place, history and geography.

Travel is one of the key ways in which Bryson explores both his own culture and identity and that of others. Born in the USA, Bryson’s travel writing began with a return to his home country in The Lost Continent, and later Notes from a Big Country. Yet, having lived in Britain for much of his life, Notes from a Small Island chronicles his return and simultaneously explores places from his past and the memories they hold. He also travels as far from home as Australia in Down Under, and even to Kenya with CARE international in Bill Bryson’s African Diary. This was my first experience of Bryson’s writing, read to my class by a Geography teacher trying to illustrate the squalor and poverty faced by those living in the slums of Kibera. I particularly remember the ‘Flying Toilets’ episode (Bill writes how residents “go into a plastic bag, then open their door and throw it as far as possible”), which, as a thirteen year old easily amused by any lavatory humour, stuck in my memory. Yet upon a more recent second reading, Bryson’s humour, engagingly, seems more directed at himself; he was once described by the Daily Telegraph as “A man who suffers so that his readers can laugh”. His hard hitting observations about poverty and corruption are juxtaposed alongside perhaps more unexpected remarks on natural abundance and history. As in his other books, Bryson’s personal experiences, here with CARE international (to whom the profits and royalties from the book are donated), characterize his anecdotal style.

Neither Here nor There: Travels in Europe, as the name suggests, is a more irreverent take by the irritable traveller retracing his student journeys around Europe, where he manages to criticize everything from the style (although not the presence) of McDonalds in Austria, to the hotel/transport/cafe/police staff in just about every country visited. Yet this is perhaps what makes him “not your typical travel writer”, as the Sunday Telegraph commented on The Lost Continent. Rather than a gushing advertisement for whatever tourist destination he happens to have visited, Bryson’s books are better read as a commentary or journal depicting his own personal experiences and reactions. Bryson cheerfully insults everywhere and everyone, but there is an underlying honesty that makes his books opinionated, fast paced, relatable, and interesting to read.

Bryson turned his hand to science in A Short History of Nearly Everything, covering intriguing aspects of science from the Big Bang, to the geology of the Earth, to humankind. His engaging style is sprinkled with little-known astronomical facts; for instance, did you know that for a period of time in the 1980s and 1990s, Neptune was in fact further away from the Sun than Pluto? Or that Isaac Newton initially lost the calculation which later became, after reworking it, the eminent Principia which secured him fame and scientific standing? Dipping in to various chapters, from the elements to the atom to extinction, I found myself being intrigued and surprised by the scientific facts, amused by Bryson’s anecdotes, and touched by his sympathy for a little known publication called How to Know the Mosses and Liverworts, “almost the only attempt to popularise the subject”.

It is not just the interesting stories behind everyday objects and occurrences which catch Bryson’s attention but also the nuances and history of language in everyday use: his books on the English language include Made in America, The Mother Tongue, and Troublesome Words, a dictionary style reference book in which each entry both clearly lays out the correct usage of certain words but also explores common mistakes, and the history and reasoning behind each.

In each book, Bryson is driven by asking: Why? His personal reactions and opinions aside, it is the pursuit of this answer that makes him fascinating reading for others driven by this question, for whom an encyclopaedia becomes an engrossing page-turner and a library an opportunity for an intellectual adventure – in short, the enthusiastic university students that, if our effusive personal statements are to be trusted, we all are at heart!