A Wilder Reading of Sherlock Holmes

Natasha Pulley in Literature on 10 November, 2010. 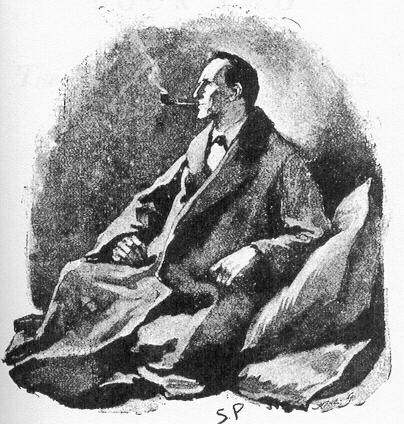 Lately I watched the newest TV adaptation of Sherlock Holmes and was impressed by the modern translation. The mobile phone trick replaced the pocket watch trick, Holmes was fairly diagnosed as an incipient sociopath and Watson was fresh back from being blown up by the Taliban. Brilliant. Except they didn’t quite go far enough. If you were to translate Holmes as he appears in the 1900s to how he would be in 2010, he would indeed come out on our side as a bit of a sociopath, but also as quietly gay. I’ll just circumlocute for a couple of minutes.

Some background. Anybody of the late Victorian persuasion probably knew that in 1895, the scandal of the century happened. Well, maybe the several attempts on Queen Victoria’s life would have been rated more important, but not so scintillatingly shocking as this one. Anybody who has done or is doing a literature degree probably knows too. For the sciencey people whose attention, as far as the nineteenth century goes, is usually fixed firmly on Mr Faraday and his interesting magnets, 1895 was the year in which Oscar Wilde was convicted for “gross indecency”.

Lots of people say he brought it on himself for reacting to the badly-spelled letter from the Marquess of Queensberry, calling him something rude. It was the latest in a series of offensive missives, so Wilde took the notoriously belligerent man to court for libel and of course the Marquess’s lawyer opened the defence by pointing out that the letter was not libellous, on account of being true. And so the Wilde case was born. What a numpty.

Actually, he was a clever man and it would be odd if he were to have done something so staggeringly stupid, so it isn’t too much of a surprise to hear that it wasn’t stupid at all. The Labouchere Amendment against indeceny between men had existed for ten years, but nobody had ever been convicted. In those ten years, two young gentlemen were arrested in full drag, outside a theatre, batting their eyelashes at passing men and their case got thrown out of court. Meanwhile, a high-end Cleveland Street brothel for homosexuals was raided and several clients of noble blood were implicated, but none of them went to prison and one of them even won a libel case similar to Wilde’s. Why? Naturally, most judges of the time insisted that such nonsense didn’t happen in England and was the province of only the basest members of society, i.e., the French. However, I suspect that the reason nobody was convicted before was twofold, and slightly more interesting than dismissive judges.

Firstly, sex of any kind was off the cards in normal writing or discussion. Victorian publishers did not let it through, unless they worked for those special gentleman’s magazines with the blank covers. There’s a Victorian poet called A. H. Clough whose publisher became very upset when he included a scene in one of his poems in which a young man puts his head in a girl’s lap. They’re both fully dressed. Clough managed to convince the publisher of its innocence. But he then proceeded to write two explicit sex scenes talcum-powdered in metaphor, and the publisher didn’t notice them. This was because the publisher was looking for indiscretions regarding laps and ankles and the edges of petticoats; he didn’t imagine for a minute that he would discover any full-frontal nudity in a respectable modern poem.

Which leads to secondly. If few people but poets ever properly discuss sex or sexuality, then there are no widely recognized sexual stereotypes beyond the obvious, male and female, and we only know about those because one of them wears a dress. Before 1895, there existed no official pin up of a contemporary gay man to compare anybody to. Therefore, a Victorian could probably be as camp as he liked, and few people would assume that this reflected anything about him other than a friendly nature and a slightly strange taste in waistcoats. And since there were no sexual connotations, often it didn’t.

After 1895, Wilde and his lover Lord Douglas provided a new stereotype, whereupon deeper meaning was most firmly attached to tactile habits and a feminine manner. But Wilde had absolutely splendid waistcoats, so this new stereotype was exaggerated. It provided precedent to arrest those who frequented shady establishments in velvet technicolour, but it didn’t help to identify those with ordinary waistcoats. In fact, it was probably counter-productive in such cases.

Now let us consider that in 1927, there appeared a collection of short stories whose first scene discovered its two main male characters in the steam of the Turkish baths together, in an “isolated corner”. One of them is described as thin and nervous, and less reticent than normal in the heat and the damp. He’s a cocaine addict, so pale frailty is to be expected, but elsewhere in the stories such a description is used only of those who have a sensitive, feminine disposition. A little earlier in 1905, the same pair spend most of another story holding hands for no particular reason. It’s an especially interesting story, because their activity (burglary) is described in terms of medieval chivalry, and any medievalists among us would agree, I hope, that the knights of Malory and the Gawain poet spend much more time kissing each other than kissing women, who tend to be a sinister presence and are famously considered to be so by one of the men in question. Both of these stories were written well after the Wilde trail, when such actions had taken on a veneer of sexual significance but could probably be even more reliably ignored than before now that everybody was looking out for flamboyant, Wildean extroverts rather than brusque depressives. As I expect you’ve guessed, the components of this intriguing pair are Sherlock Holmes and John Watson.

A lot of modern scholars dismiss this sort of speculation out of hand because the Victorians simply didn’t write that sort of thing, but I refer them to A. H. Clough and his eye-watering sex scenes. Hardly anyone noticed them, and still hardly anyone notices them; we’ve all got it into our minds that it’s unscholarly to look for sex in Victorian writing, but it is certainly there. This being the case, I just wonder if Conan Doyle wasn’t doing a Clough, only more cleverly. He wrote in a wonderful period when neither publishers nor readers expected to find “impropriety” in ordinary writing, and when an exaggerated stereotype of homosexuality did neat work of drawing attention well away from such as quiet person as Holmes.

Unfortunately, such a theory involves only circumstantial evidence is therefore inconclusive. I’m not convinced; unlike Clough, Conan Doyle wasn’t known for his literary mischievousness but rather his fascination with fairies. However, at risk of making too bold a case, I am convinced that it is ridiculous to dismiss the idea out of hand, and that anybody who does so should be made to quote, without leaning on the assumption that the Victorians never thought of it.