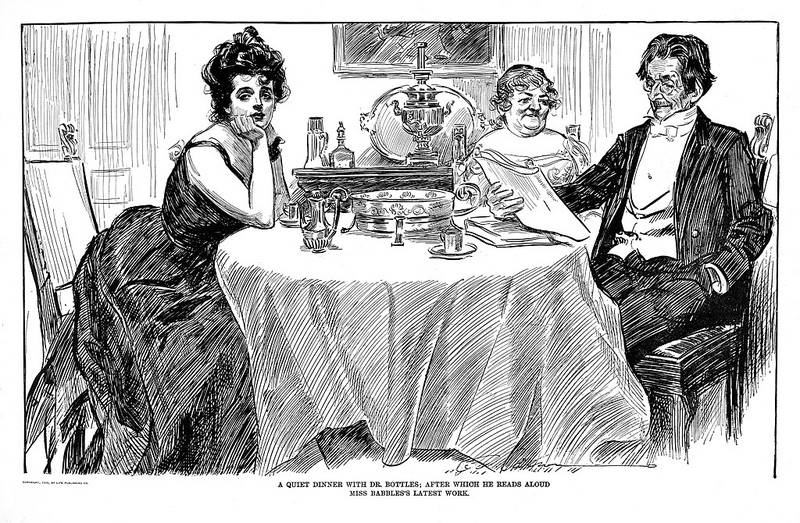 If you could bring together writers from across time and space to sit at one extraordinary dinner table, who would you invite?

The ‘dinner party’, in some form, has been a part of human civilisation throughout the ages. From the Ancient Greek notion of ‘xenia’ (hospitality) to the presentation of ‘feasting’ as an allegory for the mind in Arthurian Legend, it seems the concept of the ‘communal dinner’ has evolved in parallel with human civilisation itself. Such interest in communal dining remains with us in more recent examples prominent within the canon, including the mad hatter’s tea party of ‘Alice and Wonderland’, and also its use in platforming the free indirect discourse of the dinner party about which perspectives are centripetal in ‘To The Lighthouse’. What the opportunity of imagining one’s own hypothetical dinner grouping provides is an arbitrary party; a party of metanarratives, structured tangibly and recognizably, of human thought which is kaleidoscopically various yet pinpointed and ascertained. Such a hypothetical game allows the individual to position their own ideas across the plane of a dinner-table; suspending boundaries of time and physical setting that usually restrict both the real and the literary realms. But who in ‘literature’, fictional or otherwise, would I like to show another structure? Another time? Another stencil of thought?

Stephen Fry. For the purposes of playing guests off of one another Fry would fit the bill entirely; dabbling in a little bit of everything and admiring even opposing opinions for their independent logic and ideological structures. Fry presents, to me, remarkable potential in mediating the discourse of this dinner party. His own ‘present-day’ context allows him to already ‘know’ each of our guests in a delightfully abstract way, and one can imagine Fry using this knowledge to convincingly, and comically, feign an intimacy well-suited to the theme of a polite dinner party. And, let’s face it – Fry alone would constitute “entertaining company” far exceeding that regularly benchmarked.

Laurence Sterne. Given that the purpose of this dinner party is to erase the gap of time in literary discussion, it seems fitting to erase it all the more completely by combining the extremes of its spectrum. Sterne erases any such preconception, having written what is often considered the first modernist, or even post-modern, piece of writing (The Life and Opinions of Tristram Shandy, Gentleman) at a time when the very form of the novel was only just beginning to emerge. It would be interesting to see how he would react to such discussion of his work, and to the treatment of the questions which his piece provoked both at the time and far, far later on. Animated discussion with our ‘mediator’ Stephen Fry would be inevitable here, given Fry’s own adaptation and manipulation of this very work in A Cock and Bull Story: a re-evaluation of the same ideas in a different setting, form and structure. Next to Sterne at the table I would sit his character Tristram Shandy, (in spite of Sterne’s general association with Yorick,) given the association of Tristram with ironically early post-modern thought. Shandy’s explorations produce possibilities of an ironic dead-endedness as well as opening up discussion on the pros and pitfalls of equating a writer with one of their characters.

William Shakespeare. Although the obvious choice, Shakespeare is so widely considered thus for reasons nigh on undeniable. Not only would we all, as readers of the Literature section, want to see his response to those responding to his plays’, which have since become embedded within the collective literary imagination, clear from Tom Stoppard to Baz Lurhmann and an even greater amount more implicitly, but there are also the big questions. Who was William Shakespeare? Was ‘his’ work actually his own? What’s more, one may also equate meeting Shakespeare with meeting each and every one of his characters, the most curious of which for me being Iago of ‘Othello’; pivotal to the plot but anonymously so. Would he speak at this dinner party, having vowed himself to silence? With time suspended, would he open his mouth? Or even – need he really speak at all? Just meeting Shakespeare alone would present a wondrous opportunity to investigate contentious characters throughout the plays, and the sonnets too.

Tiresias. Ovid’s Metamorphoses is widely considered to be a catalogue of human psychology, displayed through classical topoi and character. It not only forms a bedrock for subsequent literature of the canon, but draws from further back into the canon. Metamorphoses thus stands not only as a pillar within time, of the empire in Rome, but is also almost embodied in the mythological figure of Tiresias: blind to the physicality of life but, in recompense, having the gift of eternal foresight, bestowed by Jupiter. Tiresias’ presence at our dinner party holds two-fold significance; it opens up for us the unchanging future, and so sets it in stone, as well as making accessible to us the Classical World which he represents. What’s more, it would be a lie to say that I am not just as curious as Jupiter and Juno as to which gender has ‘life worse’, or enjoys sex more – a question that Tiresias alone would be fully qualified to answer.

Harold Skimpole. Certain characters are often included in texts to illustrate certain ideas and notions, and likewise may be incorporated in a literary dinner party to similar effect. One such interesting character is Dickens’ Harold Skimpole from Bleak House. A mind beyond conception, including his own, Skimpole’s is one entirely self-centric, though not consciously so. What the world pours into Skimpole is not returned. He describes himself as a “child”. And indeed readers may see him as some kind of petri-dish of Victorian London society. In this he is somewhat akin to an equally curious character, Sebastian Flyte of ‘Brideshead Revisited’. My reason for inviting each of these? They can be test markers of our own world. It would be interesting to gage each of their responses to modern society as well as to those of the past that we have injected into this party, Sterne, Shakespeare and more. And it would be equally interesting to sit and watch their responses in return; observe how they would interpret our ideas differently, and what this would reveal about the world surrounding us in a way entirely different to that of Tristram Shandy’s inquisitive probing.

Remembering that this is a dinner party of guests of personal choice I’d like to invite writers of branches particular to my own interest, and that of many others; Virginia Woolf and Joseph Conrad amongst various others. Aside from wanting to engage in discussion with these writers myself, sitting aside and watching their own wonderfully childlike enthrallment, in discussion with those who had most influenced them, the other members of the party would be equally enthralling and exhilarating.

What such a hypothesis allows is conjunction; one of minds, a questioning of ideas, and a conjoined admiration spanning the generations. Not one of us is marble, and each of us is responsive – we are all human, eating and drinking together at the dinner table as one.