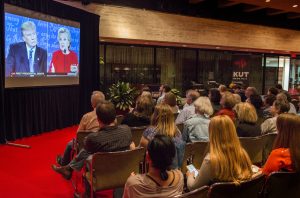 A crowd in Austin, Texas watching the first presidential debate

We are now moving ever closer to the second controversial, game-changing, world-affecting election of the year. It is sobering to realise that the decision made in November will dictate the headline news of the next four years, and will continue to affect world affairs for the rest of our lives. While it is daunting to look towards the uncertainty that lies ahead, perhaps now is the time to look to the past for the few things of which we can be sure. So as we approach the night of reckoning, let us consider the many ways in which the next leader of the free world will make history even before they set foot in the White House.

Let us start with Hillary Diane Rodham Clinton. Obviously, if she is elected, America will have its first female head of state. A great achievement for feminism, but slightly dampened by the fact that many nations have beaten them to it by over twenty years – including India, Israel, Pakistan, Yugoslavia, Poland, France and the United Kingdom, all of whom elected women as their Prime Ministers even before Clinton first moved to the White House in 1992. Moreover, although Clinton is the first woman at the top of a major party’s voting ballot, she’s actually the third woman to make an appearance on it. Geraldine Ferraro ran for the Vice-Presidency in 1984 and of course, we all remember Sarah L. Palin’s failed bid for Vice-President in 2008.

However, let’s not overplay Clinton’s gender as the only factor in her uniqueness. She also has many other qualities that set her out from past Presidents (and wannabes). The Clintons would be the second family in history to move back into the White House after having lived there before, after Grover Cleveland, who was both the 22nd and 24th President. She would also be the second person to live in the White House for more than eight years, after President Franklin Roosevelt, who lived there for 13. And with regards to offices other than the Presidency: Clinton is referred to as Secretary Clinton because she served for four years as Secretary of State, which is roughly the US equivalent of the Foreign Secretary. However, unlike here in the UK (where Prime Ministers as recent as John Major and James Callaghan were ex-Foreign Secretaries) it is surprisingly rare to take the step up to the Presidency. The last Secretary of State to make it was James Buchanan – whose incompetence in both offices led to the Civil War in 1860.

As a Chicago, Illinois native who served as the Senator from New York, Clinton represents a different state to the one she was born in. This is fairly common in America – as evidenced by Ronald Reagan (born in Illinois, represented California), George W Bush (born in Connecticut, represented Texas) and of course President Obama (born in Hawaii, represented Illinois). Donald Trump, however, does represent his birth state of New York. This would make him the first president in the 21st century who was born in the state they represent. 2016 also marks the fifth election in US history where both candidates are running on behalf of the same state – and the third time that that state is New York, after 1904 and 1944, where Teddy and Franklin Roosevelt respectively ran against other New Yorkers. The other two such election years were 1860 (with Lincoln running against Stephen Douglas, also of Illinois) and 1920 (with Ohio Governor James Cox competing against Ohio Senator Warren Harding). With a 20-point polling deficit in the state, Trump would definitely lose his home even if he managed to win the election; this would make him the first person in history to become President without it (Woodrow Wilson lost his home New Jersey in 1916, but only after having won it once in 1912).

While it is uncommon for a President to have been a former Cabinet Secretary, it is incredibly rare for them to have had no previous political career at all. Before Trump, only eight people had ever been nominated by a major party despite no prior political experience. Of these eight, six were former generals, all with impressive resumés. Winfield Scott and Zachary Taylor had led the army to victory in the Mexican-American War; Generals Hancock, McClellan and Grant were Civil War veterans; and Eisenhower of course coordinated the liberation of France in 1944. Three of these six generals ended up as President, but neither of the two non-military candidates managed to win. The first was Alton B. Parker, whose nomination was understandable as he was serving as the Chief Judge on the New York Court of Appeals. Although he was lacking in governmental or military experience, he had clear legal experience. The second was the highly confusing Lewis Wendell Willkie. Like Trump, Willkie was a businessman for some years, and he was an avid campaigner against his opponent’s decision to establish the Tennessee Valley Authority. Willkie’s campaign encouraged an interventionist foreign policy in an effort to create a stronger opposition against oppressive dictatorships overseas, whilst his Democrat counterpart preferred the isolationist approach. Although he lost, his pro-war policy did prevail once a foreign power targeted the United States directly – at Pearl Harbor in 1941.

Despite the inherent differences between them, a President Trump would have the chance to vindicate Willkie’s legacy: that of a businessman challenging government overreach and changing the foreign policy flaws of his predecessors. And whether or not Clinton wins the Presidency, her success so far will almost certainly prove to be an inspiration for generations of young women to come. As violent and messy as the American political game has become, I think that everyone can admit that both of the candidates would represent a break from tradition – for better or for worse.