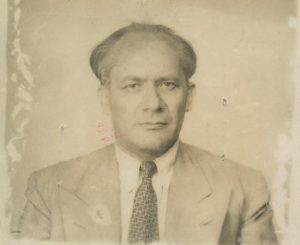 A portrait of Raphael Lemkin

Since childhood, Raphael Lemkin had been deeply troubled by the apparent absence of punishment following horrific and inhumane acts. Stemming from Roman Emperor Nero’s attack on Christians in the first century, to the massacre of Jews in local pogroms in 1906, his unrelenting quest for justice was certain. When reading about Talaat Pasha’s assassination in a news article he was outraged that the man who killed him would be imprisoned, yet Talaat, murderer of more than a million Armenians, had been left to roam free. Lemkin realised that state sovereignty was the enemy of justice and therefore decided to alter this legal flaw.

Lemkin, a Polish Jew, believed that cultural groups had to be protected and therefore submitted a draft law banning both ‘barbarity’ and ‘vandalism’to the Madrid Conference (1933). Regrettably, he was unable to formally present his ideas in person and lacked support. Additionally, the weak and divided League of Nations was unable to compose joint law, especially one upholding minorities. Making matters worse, back in Poland Lemkin was dismissed by the Warsaw government, mainly due to his critical stance on Hitler.

Interestingly, Lemkin was not the only one who had learned from the past. Hitler’s rhetorical question; ‘who today still speaks of the massacre of the Armenians?’ allows us to consider whether history could have taken a different path had Talaat been punished or the Madrid Conference proceeded with Lemkin’s law.

At the outbreak of the Second World War few people foresaw Hitler’s extermination plans. Lemkin’s foresight saved him. He headed towards Lithuania, then to Sweden, where he taught international law at the University of Stockholm. In 1941, he reached the US to teach at Duke University, believing that the US was at the centre of decision-making. However, he encountered great difficulty; his accounts failed to interest the Government. His letter to President Roosevelt suggesting that the US create a treaty banning ‘barbarity’ and urging him to convince the Allies to protect minorities, was discarded. The President believed it was not the right time to adopt such a law. Lemkin realised that he was trying to convince the wrong people to act, as politicians were unable to take minorities’ interests into account. Therefore in 1942 he started lobbying for action in Washington and across the country, believing that the public would put pressure on their leaders to act.

Following Churchill’s train of thought, Lemkin decided to name the nameless crime. His study of the Torah during childhood sparked an interest in the power that comes with naming something. Words have the ability to possess men and therefore by giving the crime a name, he believed that justice would follow. Lemkin knitted the Greek derivative ‘geno’ meaning ‘race’ with the Latin ‘cide’ meaning ‘killing’. Genocide would “invite immediate condemnation” (Samantha Power, 2002). However, it would also become permanently associated with Hitler’s crimes, causing difficulty for future policymakers who assumed that genocide only occurred when the criminal possessed the intent to exterminate every last member of a racial, national, ethnic or religious group.

Lemkin’s word was fast becoming embedded in the vernacular, for example, the 1944 Washington Post editorial entitled ‘Genocide’ depicted the Nazi’s deliberate and systemic killing of Jews. Giving the crime a name however, contrary to Lemkin’s beliefs, was only the beginning of a long battle to correctly apply the term and eventually criminalise the act itself. 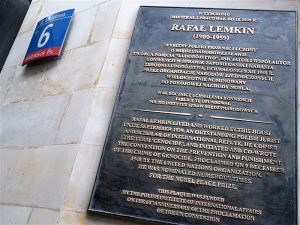 At the end of the Second World War, Lemkin visited Nuremberg to incorporate genocide into the prosecutors’ vocabulary. At the same time, he learned that at least 49 of his relatives had perished. This devastating loss drove Lemkin to further spread his cause. Moreover, he was concerned by the fact that had the Nazis not invaded Poland they would not have been liable at Nuremberg. It was only because they had crossed an internationally recognised border that they were prosecuted. However, all was not lost as the October 1945 Nuremberg indictment described the actions of the Nazis’ as “deliberate and systemic genocide”, mentioning Lemkin’s term for the very first time. This brief victory was quashed by the fact that genocide was not mentioned at the tribunal in which 19 Nazis were convicted of crimes against peace, war crimes and crimes against humanity. Here there was no mention of genocide.

Despite this disappointing turn of events, Lemkin remained convinced that universal moral principles were necessary to curb national law and continued his fight for justice on these grounds. He was determined that the newly formed United Nations should criminalise genocide. Lemkin flew to New York and drafted a sample resolution condemning genocide. In 1946, the General Assembly unanimously passed a resolution criminalising the act and Lemkin appealed directly to the domestic political interests of UN delegates in urging its passage. The Convention on the Prevention and Punishment of the Crime of Genocide (1948) composed a new measure in which interference in a genocidal state’s affairs would not only be permitted, but would be required.

However, the Senate Foreign Relations Committee prevented prospective hearings on the genocide convention in 1957. Critics of the genocide convention used the Human Rights Law to kill Lemkin’s law, arguing that there was no need for a genocide pact because the Human Rights Law covered the crime of genocide. Lemkin responded that “to be unequal is not the same as to be dead”. Almost four decades would pass before the US ratified the treaty and enabled the use of ‘genocide’ as a conviction.