The Value of the Historical Re-Enactment 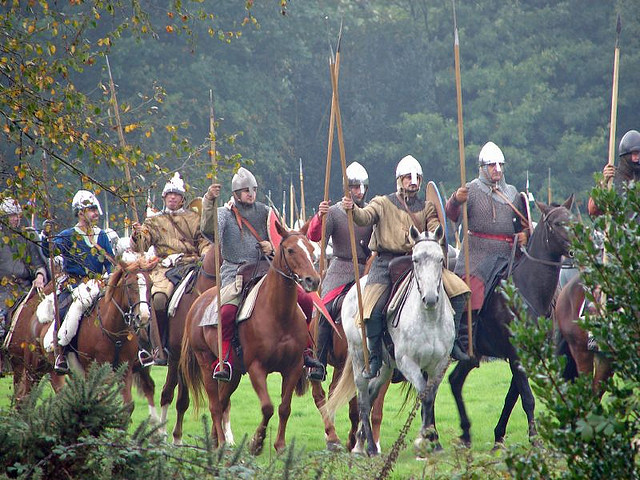 Re-enactments: an exciting if often inaccurate portrayal of historical events.

Sheldon Cooper: I’m sorry, I am not going back to the renaissance fair.

Howard Wolowitz: Come on, Sheldon, there are so few places I can wear my jester costume.

Sheldon Cooper: I don’t care. There are far too many historical anomalies for my comfort.

Rajesh Koothrappali: Oh, okay, how about this. You can go dressed as a Star Trek science officer exploring a planet very similar to Earth in the fifteen hundreds.

As Sheldon Cooper is wont to point out, historical fairs are rarely the most accurate depiction of the past available; however, they are still one of the most popular. Notably, in recent years, a number of major re-enactment fairs have become popular, such as the annual Kentwell Tudor enactments. Even National Trust properties have begun to see the importance of letting the public become part of the history being portrayed, allowing more interaction with the exhibits. While this has caused controversy, interactive history is clearly the step forward for encouraging a wider interest in history, and hopefully allowing people to see it as more than the history of dusty old castles and military sorties.

I visited towards the end of the re-enactment, and thus I fear missed out on most of the activities and crowds, however there had clearly been an effort made to put across the ambience of a medieval setting, with tents on Palace Green, and the re-enactors dressed in traditional ‘peasant’ clothes (though it was slightly difficult to tell if they were meant to be representing Normans, or Anglo-Saxons). Furthermore, there were stoves set up, as well as furs hanging on washing lines, stressing the social aspect and the history of the everyday, moving beyond the old fashioned battle groups – a rising trend in re-enactments. The prevalence of stereotype was notable, but it was engaging and designed to appeal to kids, which, judging by the enraptured audience, it most certainly did.

Part of the importance of history is taking preconceptions about the past and looking at them in a new light; however, for this to work, there need to be people with an interest in history. Indeed, my scientist housemates even asked me when I went to the re-enactment whether I was going to see ‘those Vikings’, which shows how this area of history can often be overlooked, or indeed over simplified, in order to fit into a curriculum dominated by the World Wars and the Tudors. By going into some of the social history of ordinary lives, visitors clearly got a sense of more than just 1066 and John I, which is often all that gets taken away from study of the Normans.

Also, as part of the events connected to the anniversary of Durham Cathedral, it drew new visitors to Palace Green and the cathedral, important in a time when cuts mean less money is being spent on old buildings, with more reliance on public donations. Thus, it is a good thing that the history of the building is being explored in a wider manner, especially shortly before the Lumière festival, which is drawing more attention to the Cathedral. This will hopefully thus encourage a further interest in old buildings, which can often get criminally taken for granted.

The kids, moreover, while probably not taking in the scenery around them, certainly got a different view of Palace Green and indeed the history of Durham – an important city for the Normans, located in the North and near the border with Scotland. While the exhibit most of them seemed interested in was the mock battling, with a number of wooden weapons and a ‘battling pit’ (or a roped off area of Palace Green), the kids visiting clearly were, at very least, learning about styles of battle, as well as some of the weapons used. There was a lot of information to be taken in and learnt about, and hopefully it inspired a few of the visitors to think about more than just the history on the curriculum.

Beyond all this, however, it looked like the kids were having a good time looking at the various enactors’ activities. And in the end, that’s what really matters during events like this.