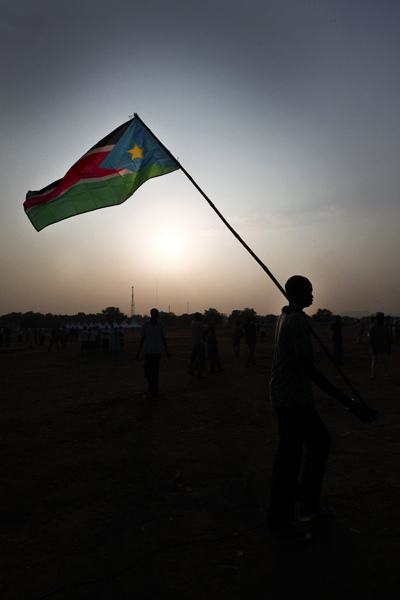 It would be perhaps appropriate to style South Sudan, the world’s newest nation, as a beaten wife, liberated at last from her oppressive husband, Sudan proper, now a separate nation. Their marriage was protracted, unhappy and characterised by domestic violence on both sides; the divorce, which came only last month, stands among the bitterest in human history. Both nations have been devastated by more than fifty years of internal conflict; the term “Sudan”, much like “Vietnam”, has come to describe a war, rather than a country. And, although metaphorically speaking, documents have been signed and rings returned, the future of the two nations remains uncertain. A custody battle simmers regarding the Abyei and Nuba territories, while potentially the most explosive custody dispute concerns the ex-couple’s favourite child: Sudan’s oil supply. In the wake of such a messy divorce, all that anyone can do is search through the wreckage and try to determine exactly where things went wrong. Did regional differences between the two parties make estrangement inevitable? Or should blame be laid at Britain’s door, as the oppressive colonial power responsible for arranging and perpetuating the unpromising match? Or finally, as historians are only just beginning to suggest, was it the poor decisions on the part of Sudan’s northern government in Khartoum which drove a wedge between the couple? These questions are in need of answers, as the two parties are finally free to go their separate ways.

Perhaps blame for the bitter unravelling of the Sudanese marriage can be attributed to regional differences. Geographically, culturally and religiously, the two Sudans are anything but a match made in heaven. The northern region has an arid climate and is predominantly desert, while most of South Sudan is jungle or swamp-land. More important are cultural differences: northern citizens are Islamic and speak Arabic, while English is spoken in the predominantly Christian South. Post-independence, northern Khartoum government was accused of neglecting the South, and worse, of trying to impose Islamic law on a region totally unsuited to such a change. Perhaps, then, it is fair to say that the marriage fell apart so catastrophically because of fundamental personality clashes; it was just not meant to be.

Or perhaps we should succumb to the judgement which has been in vogue amongst historians of Africa since decolonisation: the Sudanese situation is all the fault of colonial rule. Sudan was governed as a British colony from 1899 until 1956, at which point it achieved independence. The main criticism levelled at Britain, (and other European powers), is that a grid of contrived and artificial borders was imposed on Africa during colonial rule, with little consideration of regional or cultural differences on the ground. Initially, Britain did in fact rule the two Sudans as two distinct areas, but eventually gave in to northern pressure to integrate the two areas; a shotgun wedding, if you like, which could only end in disaster. So perhaps blame for the acrimonious divorce of North and South Sudan should be attributed to Britain. After all, it was colonial rule which arranged the marriage, forcing the unlikely couple into a partnership that could only end in heartache and eventual separation.

However, the tide in the historiographical world appears at last to be turning. As more and more time separates decolonisation and the present day, the conventional it’s-all-Europe’s fault explanation appears more and more tired and unconvincing. It may instead be time for post-independence African leaders to take responsibility for the problems faced by the continent today, and in this respect, Sudan is no different. In 1972, as a gesture of goodwill, Khartoum granted some autonomy to the south, ending the first civil war. However, a disastrous political decision in 1983 to rescind these privileges plunged the country into another twenty-two years of civil war: a development entirely independent of British influence. Clearly, it is time to stop falling back on the colonial excuse; the crumbling of the Sudanese marriage had far more to do with post-independence government than British interference.

One can only hope that the Sudanese divorce, however acrimonious, will allow for some much-needed, although admittedly clichéd, “closure”; an end to a conflict which has raged for more than fifty years and taken the lives of some two and a half million African citizens. And yet the dispute in the historical world appears to be just beginning. As more and more time elapses, conventional conclusions about the damages wrought by colonial rule become increasingly tired and out-dated, and Sudan is no exception. Poor political decisions independent of British influence were responsible for the outbreak of the Second Civil War, a conflict which prevented marital harmony for another twenty long years. Colonialism, especially in the case of Sudan, increasingly appears the easy way out; a conclusion which absolves modern governments from any further scrutiny. January 2011 marked the fifty-fifth anniversary of Sudanese independence, and yet only now do we see a solution to the nation’s problems which may, (although there is no real guarantee), last longer than a few years. It is clearly time for African leaders, and indeed historians of Africa, to stop falling back on the colonial excuse.