The National Trust: Commercialising Our Heritage? 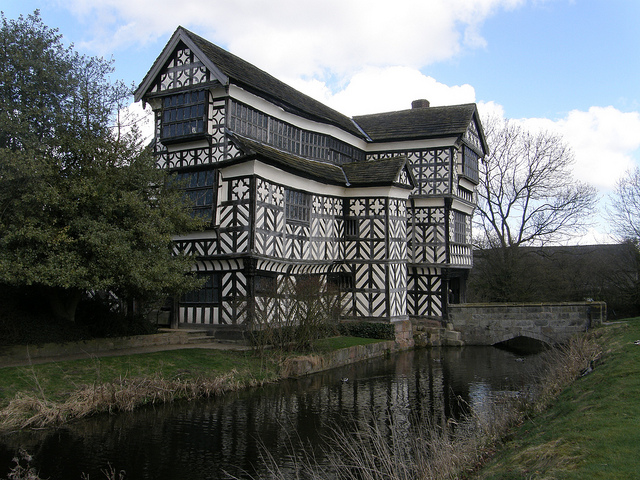 Little Moreton Hall – rescued or ruined by the National Trust?

One body of opinion holds that the National Trust has sanitised the heritage of this, our sceptred isle, by putting its own commercial brand on the diverse buildings and landscape that it exists to safeguard; that somehow this brand has eroded the very essence of what it seeks to protect.

Who has not visited a property to be met by roped off rooms, climate control, darkened interiors, the ubiquitous gift shop peddling the usual wares and the converted stable yard housing very twenty-first-century toilets and restaurants? Who has not been drawn into the second-hand bookshop or been tempted by the inevitable plant sale or jumped out of the way of golf buggies whizzing less mobile visitors around the English countryside? But does this really detract from the ‘heritage experience’?

If the National Trust is truly in the dock, historical and contemporary witnesses can be called and a robust case for the defence can be made.

I call the first witness: the twentieth century. In my home county of Nottinghamshire, the number of country houses left to die in the twentieth century reads like a casualty list from the Great War. Overgrown foundations and fading sepia prints for properties lost as late as the 1960s, or treated unlovingly by the military during the 1940s, are testaments to the vision shown by the founding fathers and mothers of the National Trust decades before. It is a testament that, amidst the propelling greed of the Industrial Revolution, there were true visionaries who could see a hole being blown in the very fabric of our nation, and they set out to protect some of that fabric for future generations.

The second witness might be that history which we say we seek to protect. Who has not visited Fountains, Rievalux or Tintern Abbeys and marvelled in equal measure at the sheer scale and beauty of the ruins, but also at the wanton medieval vandalism? History has not always been a friend of heritage and the survival of heritage should not be left to chance. Sir John Betjeman might speak eloquently for the Trust having himself saved London St Pancras station – paradoxically one of those very edifices that came to symbolise the Victorian era and Industrial Revolution. Who does not now marvel at the renaissance of this truly magnificent structure complete with its shopping malls and high class hotel?

And if there is some misplaced snobbery about the commercialism and modernisation brought by the National Trust, are other landowners marching to a different drum in 2011? No they are not. A visit to Chatsworth House in Derbyshire – privately owned by the Duke of Devonshire – will offer you all the trappings of a National Trust visit, plus the unashamed lure of the house bedecked for Christmas, a family farm and an adventure playground in the exceptional grounds. (You might also want to tie the knot there by contacting their dedicated wedding team for a tailor-made day to suit your taste and pocket.)

However, the most eloquent, beguiling and convincing defence witnesses are all around us. They do not need to be called into any court of law or to do anything other than to perpetuate their own remarkable survival into this austere, materialistic and unforgiving present. An article of this length would guillotine the speeches of a few key witnesses or ignore the words of a large supporting cast, but it would be remiss not to admit a few:

Travel, if you will, to Chartwell, the home of Winston Churchill in the glorious Kent/Sussex countryside. Imagine him painting and relaxing in his studio in the grounds or perhaps sitting in the marvellously light dining room with the power brokers of the day. The only thing that might be missing is perhaps a whiff of cigar smoke, though that can be arranged.

Journey up the drive to Little Moreton Hall in Cheshire and stop as thousands have before you to take a photograph of the haphazardly crooked black and white house built for the local landed gentry.

Delve into the Throckmorton family history of the owners of Coughton Court, and in the process learn more in a few moments about the true personal cost of religious conviction, high morals and greed than any dusty history text book could tell you in the same time.

Marvel at the Chinese Bed, an used wedding present in Calke Abbey in Derbyshire, as the clutter of the Harpur Crewe family is opened up to a modern gaze.

Stretch the neck muscles to take in the lustrous ceilings at Kedleston Hall in Derbyshire, and explore the progress of the Curzon family through our colonial history.

Saunter through one man’s vision of the greatness of Great Britain and mankind in the manicured gardens at Stowe.

Meander through the fifty rooms of Lanhydrock House in Cornwall as you experience the full range of a hierarchical society. Sense the poignancy of the moment as the owner’s belongings lie packed ready for war, knowing full well that he was one of the Great War’s early casualties.

Though other innumerable witnesses may crowd in and demand a voice, any reasonable member of the jury would already surely be arriving at a simple verdict.