The lengthy struggle for gay rights in America 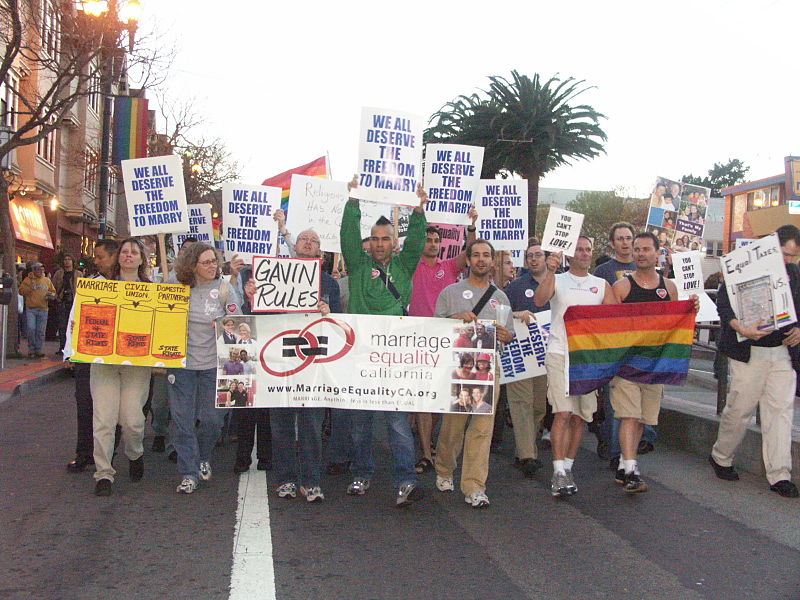 Gay rights have always been a more controversial issue in the US than the UK- to cite one example same-sex relations were legalised in the UK back in 1967 whereas many US states still had laws criminalising them until the Supreme Court struck them down in 2003. Here in the UK the leaders of all three main political parties have endorsed same-sex marriage whereas in America the conservative Republican Party vehemently opposes the measure whereas the liberal Democratic Party has given it somewhat tepid support. The US is a highly polarised country (which is somewhat inevitable seeing as it’s a continent-spanning country with a population of over 300 million people) and so the country is fiercely divided over the issue of gays and their rights. Therefore it makes electoral sense for the Democrats to appeal to their socially liberal voting base and support gay rights whereas the Republicans appeal to their highly religious and socially conservative base by opposing them.

Of course the concept of ‘gay rights’ as a political issue to be debated is a very recent one. Before 1969–70 and the birth of the gay liberation movement there was essentially no incentive for the Democrats to support gay rights. There was no obvious gay voting block to appeal to as the vast majority of gay people were closeted for fear of discrimination and public hatred. These fears were well justified as public opinions polls showed repeatedly that the American public was strongly opposed to homosexuality. A 1966 poll found only 1 in 5 favoured ‘legalising homosexual behaviour’ and a 1969 Harris found 63% considered gay people harmful to American life. For these reasons gay rights in the US pre-1970 were practically non-existent. Almost every state had sodomy laws making same-sex relations illegal and due to public attitudes and the lack of legal protections open homosexuals would almost certainly find themselves fired from their jobs and discriminated against in almost every other area of public life.

The birth of the gay liberation movement in America is commonly dated to the Stonewall Riots which took place in New York in June 1969. Police raids on gay bars were routine in the 1960s but when they raided the Stonewall Inn the clientele, fed up with police homophobia, fought back for the first time and the raid turned into a riot. In reality a number of factors, including the general counter-culture movement of the late 60s, led to the formation of the gay liberation movement but Stonewall was a powerful symbolic moment for gay people and kick-started the movement in New York at least.

New York was an early centre for the gay rights movement. It was a cosmopolitan urban centre with a substantial gay population (even if activist claims that there were over 1 million gay people in New York was somewhat overblown) and the city was generally culturally liberal. This meant that Democratic politicians in the city were naturally more sympathetic to the gay rights cause then politicians elsewhere would be and that the gay rights groups had leverage over the politicians. They could promise to deliver the gay voting bloc to gay-friendly politicians and campaign against politicians who refused to stand up for gay rights.

America’s diversity has led to greatly differing results for gay rights campaigners. In socially liberal and urbanised states such as Massachusetts and New York there are substantial gay populations and more importantly the general population is socially liberal- this means that the Democrats feel there is more to be gained than lost by pressing for gay rights so 9 states have currently legalised same-sex marriage. However in more conservative states such as Alabama the general population is strongly opposed to homosexuality. This means that most gay people either remain closeted or move to more liberal states- without a strong gay rights movement to push the Democrats into action they generally remain silent on the subject.

On the national level Democrats may be genuinely supportive of gay rights but electoral considerations always outweigh genuine beliefs- this is politics after all. The thorny issue of same-sex marriage illustrates it perfectly. Until a couple of years ago the majority of the population was opposed to same-sex marriage and so the national Democratic party was opposed to it. Then in 2011 polls began showing same-sex marriage was supported by the majority of the population and suddenly President Obama declared that he had ‘evolved’ in the issue and was now in support of it. Obama’s ‘evolution’ on the issue looks particularly cynical as he claimed to support same-sex marriage when he was a senatorial candidate in relatively liberal Illinois back in 2004 but decided he was against it after all during his 2008 Presidential campaign.

The Democrats have generally supported gay rights but have not been willing to expend too much political capital to fight for them. Bill Clinton had planned to end the ban on gay servicemen in the military when he was President but in the face opposition from Republicans and the Pentagon agreed to the messy compromise of Don’t Ask Don’t Tell, where gay people could join the military as long as they kept their sexuality completely hidden. Clinton also signed the ‘Defense of Marriage Act’ which banned the federal government from recognising same-sex marriages. In a spectacularly cynical move the Republicans introduced the Act months before the 1996 elections and Clinton, knowing that public opinion was against same-sex marriage at the time, decided he wasn’t going to risk damage to his re-election campaign by standing up for gay rights.

The evidence shows that acceptance of gay people and support for gay rights is growing year by year in the US (as in the rest of the Western world). This is likely to cause the Democrats to become more vocal in their support for gay rights as it becomes a less electorally risky position, and even some Republicans are beginning to realise that history is against them on this issue and suggesting that their party tone down its rampant homophobia. It looks like gay people will finally be accepted as fully equal citizens in the near future but this will be due to the people dragging their politicians along behind them, not the politicians themselves boldly standing up for their constituents’ rights.