The evidence of the future: changing our view of the past

Samantha Standring in History on 6 November, 2010. 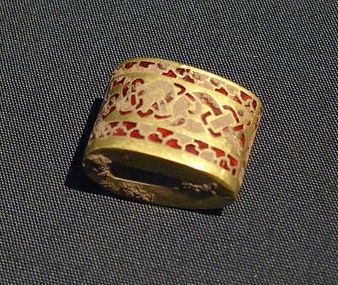 A beautiful gold sword hilt: one of the many items unearthed in Staffordshire

When an unbelievable archaeological site turned up in Fred Johnson’s field, right next to a busy road near Lichfield, the cultural media sector went crazy. The discovery of the Staffordshire Hoard in July 2009 was an enormous breakthrough in terms of the multitude and quality of the finds. It was the largest hoard of Anglo-Saxon gold and silver ever to have been found. With 3490 exceptional pieces, and a sum weight of 5.094kg in gold, the hoard has been valued at £3.285 million. Immediately it was recognised that these finds could redefine our interpretation of warrior society and ritual in the Anglo-Saxon period. But what was actually involved in the recovery of the hoard? What types of artefacts were found? And what are the implications for the academic world?

Kevin Leahy, National Finds Advisor at the Portable Antiquities Scheme, spoke on the topic as a guest of the Durham University History Society on Monday night. His involvement with the extraction and treatment of the hoard from a very early stage allowed an insightful and persuasive historical perspective which, coupled with his at times light-hearted and humorous delivery, meant it was a fascinating talk for all who attended. He produced a wave of new material, ranging from helmet fragments to a metal strip quoting the Book of Numbers, which will certainly be a hot topic for historical analysis, provoking new and contentious conclusions to ongoing questions.

The Staffordshire Hoard is remarkable for the amount of military artefacts it produced. 60.1% of the finds were weapons or weapon fragments (hilt fittings and pommel caps are amongst the most numerous). Interestingly though, there were no blades, indicating the hoard was some sort of post-battle trophy collection and the blades were reused. Also, no female items were discovered (which is remarkable since they are quite common and have been found at nearby sites). There were also a number of remarkably intricate objects including a contorted processional cross, elaborate buttons, much filigree work, engravings, animal depictions and interlaced strips. Some of the garnets were even backed with gold foil to avoid dullness. The detail of such items demonstrates exceptionally skilled workmanship, in some cases ahead of their time. The wiring on some objects is so minute that those currently examining it are unsure how it was made. Until now, drawing wire was thought to have only surfaced as a technique in the ninth century.

This leads onto the overarching problem of dating the hoard. On this subject, academic opinion is completely divided. Leahy believes the hoard to be from the seventh century, placing it in the Mercian kingdom, which was centred around the valley of the River Trent in what is now the Midlands. However, the hoard had no archaeological context when found; wooden posts, from which the felling dates of the trees can be calculated, and skeletons, which can be radiocarbon dated, were both absent. “If only it was as simple as Dan Brown had it,” Leahy joked.

So far, the project has been surrounded by a hectic atmosphere. The site had to be excavated rapidly and efficiently to avoid damage by the public. It was extremely vulnerable, explained Leahy, with exposed artefacts, such as a precious golden garnet disc, just lying on the topsoil. “We were terrified,” he said, referring to the responsibility and the pressure to “get it right” felt by those working on the project in the first few days.

Due to the magnitude of the hoard’s implications for academia, the archaeologists could afford no mistakes. Initial work was thus kept secret. The site had 24-hour security, people were turned away under the pretence of health and safety issues and the historians worked in the basement of the Birmingham Museum where no one knew what they were doing.

Since then, it has been a rush to catalogue the artefacts, some of which are unstable. Most problematic have been eroded clasps, leaving precious stones held to artefacts by earth alone. To speed up the process, inventive methods were found such as the use of raffle tickets which, with their bright colours and never-repeated numbers, proved to be well-suited to cataloguing.

It has been a race to get information to the public as soon as possible. Some of the artefacts have already been made available on temporary display in Birmingham and Stoke. And the demand to see the items demonstrates an overwhelming public interest. 40,000 people went to the Birmingham display within only a few hours and a sum of £900,000 was raised for the art fund, crushing previous figures.

With such interest, the Portable Antiquities Scheme is keen to place the bulk of the material, including photographs and short synopses, on the web to facilitate access. They are looking at an estimate of five years to achieve this. Though this sounds like a long time to wait, in relation to the publication of data concerning other major sites, it is actually prompt. Thirty years were spent composing definitive works on Sutton Hoo before the public had access. The method of publishing brief synopses instead will hopefully give the academic world the chance to form their own opinion much sooner.

“I’ve not seen anything like this before,” said Leahy of the 240 bags-full of finds recovered from the Staffordshire site. We “can throw the full arsenal of modern technology” at it now, he added. The results of this analysis, and the potential subsequent reshaping of the medieval narrative, will be eagerly awaited by historians and the public alike.

The discovery of the Staffordshire Hoard will throw the field of medieval studies wide open. How prominent was ritualistic deposition in Anglo-Saxon society? What were the common practices of warbands? Was the taking of trophies from conquered people a common feature of warfare? Will a definitive style of Mercian artwork become recognisable? These are just some of the issues to be readdressed based on the hoard; issues that will no doubt be at the forefront of academic discussion in the near future.